“Terrorists want a lot of people watching, not a lot of people dead.” So said terrorism analyst Brian Jenkins in 1975. It was a reasonable judgment for that time. The Munich Olympics massacre in 1972, which captivated world attention, resulted in the deaths of 11 Israelis and one West German policeman. The Ma’alot massacre in 1974 killed 31 Israelis. The Rome and Vienna airport attacks in 1985 killed 23 people.

All of these attacks were evil enough, but they seem positively restrained by present-day standards. Just think of some of the atrocities the world has witnessed in the past year:

July 2015—Suicide bombing at a market in Iraq frequented by Shiites kills 130.

October 2015—The bombing of a Russian airliner in Sinai kills 224.

October 2015—A suicide bombing in Ankara, targeting protesters at a peace rally, kills 102.

May 2016—Four separate suicide bombings in Baghdad kill at least 90.

And now Nice, where a driver killed at least 84 people by plowing his truck into a crowd during Bastille Day festivities.

What’s changed? How and why did terrorism become so much more deadly than it used to be? The simple explanation is the emergence of religious fervor as the primary motivating force for today’s terrorists.

True, some mass casualty attacks have been carried out for non-religious motives—for example, the Oklahoma City bombing in 1995, which killed 168 people, or the bombing of Pan Am 103 in 1988, which killed 270. In the former case, the perpetrator was a right-wing extremist; in the latter case, the secular Qaddafi regime was to blame. And not all religiously motivated attacks have been carried out by Muslims; one notable exception was the bombing of Air India flight 182 in 1985, which killed 329 people, and was the work of Sikh extremists.

But by and large, the increase in terrorism casualties has been the work of Islamist extremists. By killing in the name of God, they don’t feel any of the constraints that at one time bound more secular terrorist groups such as the PLO and IRA and ETA. They were heinous enough, but they were also generally careful to calibrate their violence so as to avoid a popular backlash. Islamist terrorist groups feel no such restraint. In fact, they seem to be in a race of one-upmanship to see which group can slaughter more people.

That trend began with Hezbollah, the Lebanese Shiite group organized by Iranian agents in the early 1980s. It pioneered both suicide bombings and mass casualty attacks. October 23, 1983, was a turning point: That was the day when separate suicide bombers struck both the U.S. Marine Corps and the French barracks in Beirut, killing 305 people. Those tactics, pioneered by a Shiite terrorist organization, soon enough migrated to the premier Sunni terrorist group, al-Qaeda. In 1998, it used truck bombs to hit two U.S. embassies in Africa, killing 305 people.

The depravity became far worse after the rise of al-Qaeda in Iraq, which was actually criticized by Ayman al-Zawahiri, now the leader of al-Qaeda central, for killing too many Muslims as a result of its anti-Shiite bloodlust. AQI was estimated to have slaughtered more than 10,000 people between 2003 and 2008. And now AQI’s successor organization, the Islamic State of Syria and Iraq, is upping the ante again by inspiring or organizing so many of the worst terrorist attacks in recent years. Other terrorist organizations such as the Taliban, the Haqqani network, al-Qaeda in the Arabian Peninsula, and Boko Haram are racing to keep pace in this grim race for body counts and the media headlines that come with them.

Unfortunately, the more people that terrorists kill, the more that the public becomes desensitized to the killing—especially in countries such as Iraq that have witnessed so much carnage in recent years. As a result, terrorists have to kill even more in the future—or kill in more gruesome ways, as ISIS does with televised beheadings and burnings—to achieve the shock factor that they seek.

This should make us very concerned about the future. ISIS has already used chemical weapons. If it, or another terrorist group, can get its hands on other weapons of mass destruction—biological or nuclear—it will surely use them with no compunctions. All restraints about mass murder are being abandoned.

That should not make us in the West abandon all of our own restraints. We cannot give in the voices of hysteria, such as Donald Trump, who has called for banning all Muslims from coming to the United States, or Newt Gingrich, who now calls for deporting any Muslim who believes in Shariah. That would be akin to responding to abortion-clinic bombings by deporting all Christians who believe in the Ten Commandments. Both Islamic and Christian precepts are vague enough to have been interpreted in extremist and violent ways–but also in moderate and peaceful ways. We should not stigmatize entire religions because of the actions of a relatively small number of fanatics.

Yes, most of today’s terrorists are Muslims—but so are most of the victims of terrorist attacks. The vast majority of Muslims are not terrorists, and we will not beat the terrorists by declaring war on Islam. Doing so will backfire by driving more recruits into the terrorists’ ranks and making it harder to get the kind of cooperation from Muslim communities that Western law enforcement and intelligence agencies need to identify terrorists before they can strike.

We must be focused and smart in our response to terrorism, not counterproductive and indiscriminate. The inhumanity of our enemies should not lead us to abandon our own ethics and morality. We have done that in the past–for instance, by locking up Japanese-Americans in World War II–and we have always regretted it. But we must also not be complacent because the killings are only becoming worse and more routine. For suggestions on how to respond, I recommend my Wall Street Journal essay, “After Orlando, a Long War,” which in turn grew out of a post in COMMENTARY. 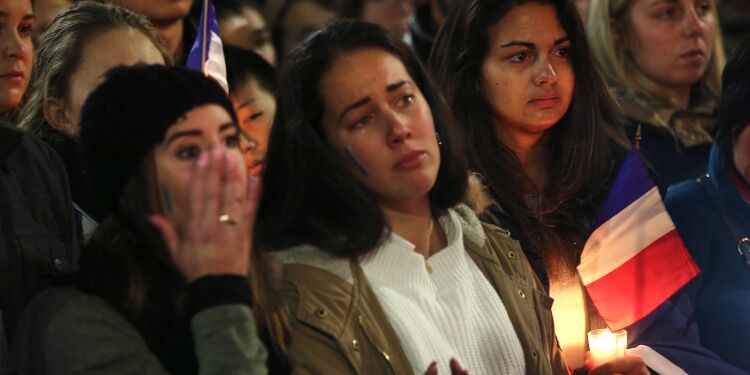