Our domestic political squabbles can seem petty and trivial when weighed against the horror of what is unfolding in Syria. Amnesty International has just issued a horrifying report alleging that between 2011 and 2015 as many as 13,000 suspected opponents of the Bashar Assad regime were secretly hanged at just one regime prison, known as Saydnaya.

The report notes: “Every week, often twice per week, between 20 and 50 people are taken from their cells to be hanged, in the middle of the night.” Most of them are only killed “after being repeatedly tortured and systematically deprived of food, water, medicine and medical care.” The details of the torture and beatings are hard to even read. “The bodies of those who are killed at Saydnaya,” the report continues, “are taken away by the truckload and buried in mass graves. It is inconceivable that these large-scale and systematic practices have not been authorized at the highest levels of the Syrian government.”

This is not ancient history but an ongoing outrage: “To this day, detainees are still being transferred to Saydnaya, and ‘trials’ at the Military Field Court in al-Qaboun continue. There is therefore no reason to believe that executions have stopped.”

And of course what happens in Saydnaya is only a small part of the war crimes unfolding across Syria. After the terror bombing of Aleppo, the Russian air force has turned its attention to the city of Idlib, with Reuters reporting that “at least 30 people died in air strikes on the rebel-held Syrian city of Idlib on Tuesday, in some of the heaviest raids there in months.”

In all, at least 400,000 Syrians have been killed and 11 million forced from their homes since 2011, with the vast majority of the atrocities committed by the Assad regime and its Russian and Iranian enablers. It is they who deserve the lion’s share of opprobrium for these unspeakable human-rights violations.

But the United States and the rest of the “civilized world” must bear a smaller share of blame for their complicity in this slaughter. Most of this is due to the hesitancy of Barack Obama, who talked a big game about preventing atrocities but, after having soured on the Libya intervention, refused to get involved in Syria. As I have said before, the Syria bloodbath is a permanent stain on the Obama presidency—in the same way that Bosnia would have been for Bill Clinton if he had not intervened to help end the killing.

But Obama is no longer in office and now the killing is happening on Donald Trump’s watch. Like Obama, Trump shows every intention of doing nothing to stop the mass murder. Unlike Obama, he is adding insult to injury by suggesting that Russia, which is aiding and abetting Assad’s crimes against humanity, is no more guilty of killing innocents than is the United States, which goes to great pains to minimize collateral damage in its military operations.

The Talleyrands of the Trump administration appear to be mesmerized by the same mirage as their predecessors—the hope, as Jay Solomon of the Wall Street Journal reports, that they can somehow induce Putin to end his support for the Iranian agenda, including Iran’s backing for Bashar Assad. Given that Assad himself is a longtime ally of Russia and provides it with military bases in the Middle East, and that Iran is a big and growing customer of the Russian arms industry, it is hard to know what would induce Putin to do a volte-face. Certainly Obama could never bribe Putin into supporting the American agenda, even by delaying a planned missile defense system for Eastern Europe.

Perhaps Trump will up the ante by offering to lift all sanctions and de facto abandon Ukraine (and possibly other Eastern European states?) to Putin’s tender mercies. Nothing is impossible, but even if that were not immoral it would still be impractical. There is scant point in bribing Russia to abandon Syria now that its intervention has already decisively tilted the battlefield in Assad’s favor. Even if Russia pulled back now, Assad would remain in a position to stay in power and continue his reign of mass murder. Iran, for its part, is getting wealthy from selling oil, and if Russia doesn’t sell it arms, China will. The Iranian threat will hardly disappear no matter what Russia does.

The administration has also talked of creating “safe zones” in Syria so that refugees can come home. President Trump has discussed the idea with, inter alia, the king of Saudi Arabia and the crown prince of Abu Dhabi, who are said to have expressed their support. But Obama previously tried to implement a version of this scheme in northern Syria and it accomplished nothing for the simple reason that there were no troops on the ground that could actually protect the safe zone. The Syrian opposition doesn’t have the forces to do so. Saudi Arabia and UAE are not going to put their troops into Syria, and even if they did, they would probably accomplish even less than they have done in next-door Yemen.

Is the U.S. going to commit its own ground troops for what is essentially a humanitarian intervention devoid of any obvious “exit strategy”? Given President Trump’s “America First” philosophy, that sounds doubtful. Instead, Trump appears bent on making common cause with Russia to fight Islamic State—the very excuse that Russia already uses to justify its terror bombing of civilians.

So in all likelihood yet another American administration will dither while the killing continues in Syria. 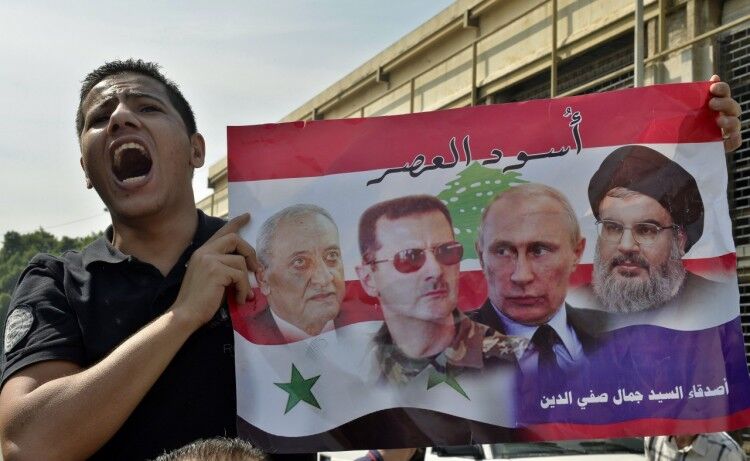