So, at long last, Donald Trump has unveiled his vaunted foreign policy team. Not a single one of them is a household name — not even in a household like mine, where foreign policy is the family business. Who do we have? Let’s see.

There are former officials from Blackwater and the Coalition Provisional Authority in Iraq, neither exactly known as a byword for efficiency. There is a 2009 college graduate who proudly lists on his resume his participation in Model United Nations in 2012 — something that I am more used to seeing on the resumes of potential interns than of presidential foreign policy advisors. An obscure energy executive, who blames NATO expansion for Russian aggression. And a couple of Islam-bashers — one of them a former Maronite Christian militiaman from Lebanon – who think there is a plot to impose Shariah law in the United States.

There is no real mystery as to why more reputable foreign-policy experts are not willing to be associated with the Trump campaign. Aside from Trump’s general ignorance and boorishness, his instigation of violence, and his crude attacks on Mexicans and Muslims, there is also the fact that Trump is incapable of articulating a comprehensible policy in any area — foreign or domestic.

His cognitive limitations were on full display during his bizarro interview with the Washington Post editorial board, which deserves to be savored in its unedited weirdness.

Trump’s inability to string together a coherent thought was obvious from the start when Fred Hiatt, the Post’s editorial page editor, asked him if he wanted to say something to open the discussion. This is a complete transcript of Trump’s first paragraph:

No, other than to say, we’re working hard, I think we’re all in the same business of trying to make our country better, a better place, so we have something in common. I’ve been treated very, very badly by the Washington Post, but, you know, I guess — and I’m your neighbor, I’m your neighbor right down the road, in fact we’re actually giving a press conference there in a little while, I think your people are going to be there. And by the way, Bob Costa is an excellent reporter, I’ve found him to be just an excellent reporter. I should tell you, because I have to give you the good and the bad. Not that he does me any favors, because he doesn’t, but he’s a real professional.

This is par for the course for Trump — veering off from a perfunctory statement about wanting to make the country better into talking about his favorite subject (himself) before changing to another, different subject (Bob Costa). He then proceeded to brag about the hotel he is building in Washington, which is not the subject that a presidential candidate usually spends long minutes discussing with an editorial board.

Trump, of course, was only getting warmed up. Before long the editorial board was treated to more of his braggadocio (“I went to a great school, I was a good student and all. I am an intelligent person”) as well as his trademark defensiveness about the size of his hands (“My hands are fine. You know, my hands are normal. Slightly large, actually. In fact, I buy a slightly smaller than large glove, okay?”). In between, there was some talk of policy — but it was almost impossible to figure out what Trump was saying, so often does he contradict himself.

Take the issue of fighting ISIS. During a March 10 debate, Trump said out of the blue, that he’d like to send 20,000 to 30,000 troops to fight ISIS after previously arguing against using ground troops. “We have no choice. I would listen to the generals, but I’m hearing numbers of 20,000 to 30,000. We have to knock them out fast.” At the time, I wrote, “[H]is comments barely caused a ripple for the obvious reason that no one takes anything he says seriously. Everyone, including his most fervent supporters, realizes that he is likely to say something entirely different tomorrow.”

Sure enough, when Trump was asked about a troop commitment by the Washington Post, he walked away from his remarks eleven days earlier:

I find it hard to go along with — I mention that as an example because it’s so much. That’s why I brought that up… I would find it very, very hard to send that many troops to take care of it. I would say this, I would put tremendous pressure on other countries that are over there to use their troops and I’d give them tremendous air supporters and support, because we have to get rid of ISIS, okay, just so — we have to get rid of ISIS… I would knock the hell out of ISIS in some form. I would rather not do it with our troops, you understand that.

But lest you think that, with these comments, Trump is pledging not to send troops to Iraq after all, he zig-zagged again only a few minutes later. He once again repeated his desire to “keep the oil” — i.e., to take Iraq’s oil, which would be a violation of international law similar to Putin’s seizure of Crimea. Hiatt asked him: “How do you keep it without troops, how do you defend the oil?” Trump replied: “You would… You would, well for that — for that, I would circle it. I would defend those areas.” Hiatt: “With U.S. troops?” Trump: “Yeah, I would defend the areas with the oil. And I would have taken out a lot of oil. And, uh, I would have kept it.”

So within the space of less than an hour, Trump was saying that he wouldn’t send U.S. troops to Iraq to fight ISIS — but he would send troops to seize the Iraqi oil fields. If I understood him correctly. But it’s almost impossible to interpret anything coming out of his mouth, so convoluted and confused are his proposals and statements.

So, good luck to his foreign policy advisers. Even if he had a crew a thousand times as distinguished as the one he actually has — even if Henry Kissinger and George Shultz were both whispering sweet nothings in his ear — they would still find it impossible to bring any logic or coherence to the vast wasteland that is Trump’s thought process. 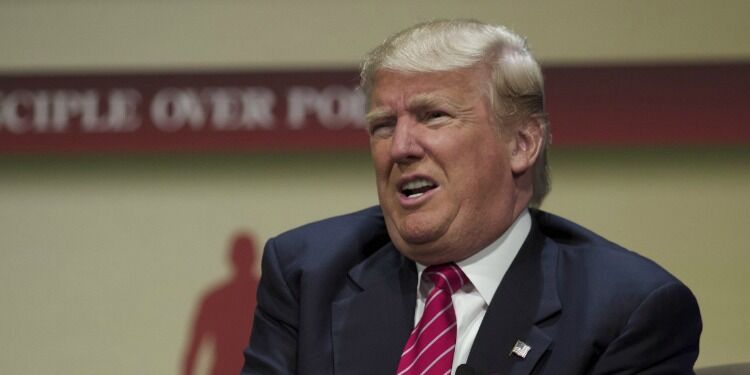