It’s one of the ironies of Middle Eastern studies and Western media that the Israel-Palestinian conflict tends to get outsize coverage in comparison to so many other matters more pertinent to local Arabs. Consider border disputes: From Morocco across the region to Iran, the only neighbors who do not have border disputes are Israel and Egypt, Israel and Jordan, Algeria and Tunisia, the United Arab Emirates and Qatar and, ever since accepting international arbitration, Bahrain, and Qatar.

Intra-Arab border disputes can be as intractable as those involving Israel and can be far more violent. Consider, for example, the 1990 Iraqi invasion of Kuwait or the constant Syrian infringement on Lebanese sovereignty that played out to devastating effect during the 1975-1992 civil war and, arguably, to the present day. While Iran is not Arab, the war between it and Iraq sparked by a border dispute ended up killing hundreds of thousands.

Egypt is the largest Arab country; one out of every five Arabs—perhaps even more—live in Egypt. In November 2016, as part of an International Monetary Fund package of reforms, Egypt floated its currency and, overnight, the Egyptian currency lost more than half of its value compared to the U.S. dollar, more than doubling the cost of imported goods. To be fair, Egypt had no choice. It was hemorrhaging money as a result of subsidies and should have reformed its currency three or four decades ago. Politically, Egyptians are also exhausted. The last decade has seen the Arab Spring, the rise of the Muslim Brotherhood, and their subsequent ouster in what many in the West call a coup and Egyptians call a revolution. Recent Islamic State attacks on Egyptian churches raise the specter of growing terrorism. Domestic problems seem so great that Egyptians concentrate on just getting by.

So, with so many huge issues with which to deal, what motivates Egyptians? Last year, President Abdel Fattah el-Sisi agreed to transfer to uninhabited islands—Tiran and Sanafir—back to Saudi Arabia, thus ending a decades-long dispute between the two countries. Enter Egyptian nationalism and pride: Egyptians took to the streets twice last April to protest the “selling” of Egyptian land to the Saudis, even though ample documentation existed that the islands were Saudi all along: The Saudis invited an Egyptian garrison on the islands in the 1950s against the backdrop of the Arab-Israel dispute, but government hostility between Egypt and Saudi Arabia on one hand and Israel on the other has largely faded and the garrisons are long gone.

Sisi probably erred in announcing the islands’ return against the backdrop of receiving a multibillion dollar aid package from Riyadh, but such unfortunate optics do not change the historical facts. Still, nationalism can be a potent tool, and Egyptians were willing to pick a fight with one of their closest Arab allies no matter that Egypt at best was holding an empty hand and Saudi Arabia had a full house. While an Egyptian court had stayed the transfer in January, an upper court blocked that stay earlier this month to allow the transfer to go through, but that decision was immediately appealed. The courts should now issue a final ruling in June.

Egypt has many problems but Tiran and Sanafir should not be among them. Sisi is on the right track in trying to resolve long-standing diplomatic disputes. That his opposition seeks to resurrect these disputes to whip up public opposition, however, shows just how difficult substantive reform can be in a society for decades shaped by incitement. 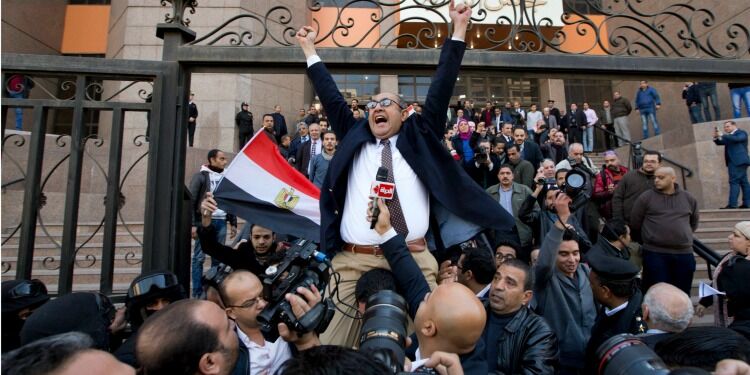