It’s hard to remember who we were as a people just two or three weeks ago. The tempo of life has slowed even as the pace of events quickens, flattening the days that bleed into one another without clear definition. We dwell on those formless days; the future is insecure and speculating on it is suddenly a dreadful prospect. But to remember who we were only a month ago is a fortifying experience because it is not who we are today.

Ours was a nation that, in good times, sent a gameshow host to the White House. But we were not any more sober in periods of hardship and uncertainty. Even amid a historic financial meltdown, we elected a president whose chief qualification was being a florid orator. We send to Congress representatives who chafe at the modest weight of their mission, and for whom prospects for advancement are measured in cable-television segments rather than legislative achievements.

In the absence of truly existential crises, we conjured them up. Things that were mere obstacles or, in some cases, downright banalities preoccupied us to an embarrassing extent. What were our crises before this moment? The consumption of red meat; the declining insect population; access to affordable housing; “modern masculinity”; and the day-to-day dramas that typify the Trump years. Amid a genuine, life-altering exigency, the things we once called crises are better understood now as what they were then: problems and perfectly delible ones at that.

We have spent decades passing the tough choices before us onto future generations. Americans convince themselves that we can borrow against our future indefinitely even as a crisis arising from our unfunded obligations looms visibly on the horizon. We’ve allowed personal consumer and loan debt to pile up, and retirement savings to dwindle. In response to the increasingly digitized and automated economy, we’ve propped up uncompetitive practices and cosseted the displaced with unsustainable benefits that are no substitute for a sense of agency and purpose. We’ve met the challenge of climate change not by treating it as it is—a threat increasingly posed by the actions of foreign actors—but by imposing ever more counterproductive and performative restrictions on ourselves. As America’s near-peer competitors abroad have grown bolder and less risk-averse, we’ve let atrophy our capacity to project power abroad and deter aggression.

And now, a truly awesome eventuality has been imposed on us. The terrible choices that we could once postpone for a date uncertain are here today, and there is no putting them off. Americans are asked to chose between the prospect of voluntary economic suicide—inviting a recession or even a deep depression—or pestilence and death on an unthinkable scale. And we must choose now or there will be more unthinkable choices tomorrow. In hospitals and makeshift facilities all over America, physicians are forced to prepare for triage. They may soon be compelled to make the morally agonizing decision to deny lifesaving care to the aged so a heedless college sophomore might live.

In the aggregate, we were a superficial people obsessed with relative trivialities. We should not be prepared to meet the measure of this formidable moment. But, however slow and reluctant at first, we most certainly are.

Across the nation, and one day at a time, Americans are improvising their way toward a resolution to these terrible conditions. Families across the country who never thought they had it in them to work full days remotely, educate their children, prepare every meal, maintain their homes, and preserve precious lines of communication with friends and loved ones are doing just that. People are stitching together makeshift masks to bridge the gap left by ill-prepared governments and private firms. Companies large and small are donating their services and taking on debt to keep Americans employed and insured while conventional commerce has been functionally prohibited. Factories that once churned out cars and bourbon are producing ventilators and hand sanitizer instead. Communities are preserving their vital bonds by holding drive-in church services and organizing volunteer platoons providing charitable services to the elderly. Hundreds of retired medical professionals and ordinary citizens are answering the call to service. Thousands are donating services and supplies to the cause. Millions are staying home to give health-care providers the breathing space they so desperately need.

The crisis and its response do not square neatly with anyone’s rigid ideological priors. States of emergency around the country have allowed governments to cut the red tape that seemed so reasonably cautious in times of normalcy. I’ve lost count of the regulations being dispensed with amid the urgent need to mobilize the private sector in response to the outbreak. But this is no libertarian revolution. The federal government has intervened in the private sector, suffocating market forces, with an alacrity unseen in the postwar period. While private labs and research hospitals initially helped fill the gaps left by an unprepared CDC, the White House has invoked wartime powers to make private concerns produce invaluable COVID-19 tests. Individuals are acting collectively but in the most extremely atomized circumstances imaginable. None of this conforms to a purely ideological understanding of how societies should organize themselves, pandemic or not. That doesn’t mean the response is wrong; it means our priors were.

There is a way out of this crisis, and we will be its authors. And while life after the outbreak will change in unknowable ways, what will persist is the reliable resolve of the American individual and the communities that individual creates to meet the measure of a truly bleak moment. And then, with luck and perseverance, we can be a frivolous people once again. 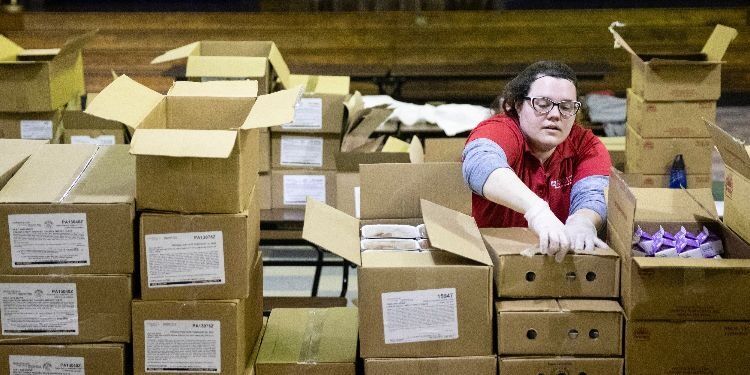