Irrespective of the realities on the ground, Hurricane Maria’s impact on Puerto Rico was declared a political disaster for Donald Trump well before it warranted that status. Among a diverse set of invested political commentators, “Trump’s Katrina” amounted to a perverse wish fathering an ugly thought. That was last week. The president now deserves the criticism he is receiving. For amid a humanitarian crisis and an increasingly frantic scramble to distribute resources to the Island, the president occupies himself by attacking his critics, calling his political opposition in Puerto Rico “ingrates,” and luxuriating at his New Jersey clubhouse. On Sunday, Trump dedicated a golf trophy to the storm-ravaged and displaced.

It’s fair to say that this is a president who does not care about optics. But is it also reasonable to accuse Trump of outsourcing the basics of governing? That charge is becoming harder and harder to disprove.

The extent of the damage done to Puerto Rico by both Maria and Hurricane Irma in quick succession was compounded by the fact that these storms struck U.S. territories (including the U.S. Virgin Islands) with fragile infrastructure. Federal Emergency Management Agency chief Brock Long said on Sunday that they had accessed all of Puerto Rico’s 78 municipalities, established 11 regional distribution centers, distributed 2 million liters of water and 1 million meals, reopened 11 highways, and restored 700 of 1,100 gas stations on the Island. Nearly two weeks after Maria made landfall, that’s not enough. It is, however, a significant operation made feasible in part by the fact that FEMA has a confirmed political appointee at the helm. Not every American agency is so fortunate.

At approximately 10 p.m. on Sunday night, a gunman opened fire on an open-air concert venue in Las Vegas inaugurating the worst mass shooting in American history. For the next several minutes, the gunman rained fire indiscriminately down on a crowd, killing at least 58 people and sending over 500 to the hospital as of this writing. “The FBI and the Department of Homeland Security are working closely with local authorities,” President Trump informed the nation on Monday morning. Surely, that’s true, but this administration is hindered by the fact that a placeholder director leads DHS.

Acting Director Elaine Duke replaced General John Kelly in July when he moved up to serve as Trump’s chief of staff. Duke, a career public servant, surely knows her agency well, but she is unlikely to have a similar familiarity with this White House. In moments of crisis, being able to navigate the West Wing is especially valuable, and political appointees are almost always better positioned to do that. Serving as a Cabinet-level head of an agency amid a crisis requires training in public diplomacy, communications, and strategy. Career bureaucrats may be excellent managers, but they are susceptible to parochialism in a way that congressionally approved appointees are not. Vitally, Congress has not been able to exercise its constitutional authority to vet the personalities, professional histories, and managerial style of a prospective agency head. None of this is much of an issue until the crisis hits.

Trump has nominated no one to replace Kelly at DHS. He has not even primed the Senate to make room in the calendar for confirmation hearings. This agency, which is responsible for Trump’s ostensible priorities, such as preventing terrorist events and illegal immigration into the United States, is headless and will remain so for the foreseeable future. Fortunately for Trump, none of his staunchest defenders seem to care.

DHS is now joined by the Department of Health and Human Services as an agency without a director. Following a controversy involving unnecessary private air travel, HHS Secretary Tom Price resigned his post on Friday. Acting Director Don Wright will manage the agency in charge of overseeing CHIP, Medicare, Medicaid, the Affordable Care Act’s insurance marketplace, the Surgeon General’s office, and the quality of America’s food and drug supply. If Trump’s disengagement with regard to DHS is any indication, Wright will hold the title “acting director” for a long time to come.

These new vacancies should not overshadow the old vacancies, which continue to present Trump with unnecessary challenges. Navy Admiral Anne Schuchat continues to lead the Centers for Disease Control. Hers is a largely invisible position right up until the moment a health crisis hits—such as, for example, the largest outbreak of Hepatitis this country has seen in decades, which is ongoing in San Diego. The State Department continues to suffer from a lack of undersecretaries of state, who are vital for the distribution of diplomatic instructions down the chain to U.S. emissaries on the ground around the world. Even in places like South Korea, where the president is consumed with making sure that a nuclear crisis doesn’t become a bloody shooting war, Trump is not represented by a confirmed U.S. ambassador. He hasn’t even nominated a candidate. Instead, Trump publicly berates his Secretary of State, Rex Tillerson, for “wasting his time” engaging in bilateral negotiations with the North Korean regime over its nuclear capabilities.

This is not a government in control of events. It is, instead, buffeted by them, and it has been fortunate up until now that the crises it has encountered were relatively manageable. But the disaster in Puerto Rico is sprawling and becoming a public-relations nightmare. The attack in Las Vegas will remind the nation that its defenses are down. Tensions abroad are not easing and could spiral out of control. The president needs to delegate these responsibilities to political appointees who are accountable to the public and over whom Congress has some authority. Instead, he’s busying himself handing out golf trophies. His disengagement from the affairs of state may come at a significant political cost. 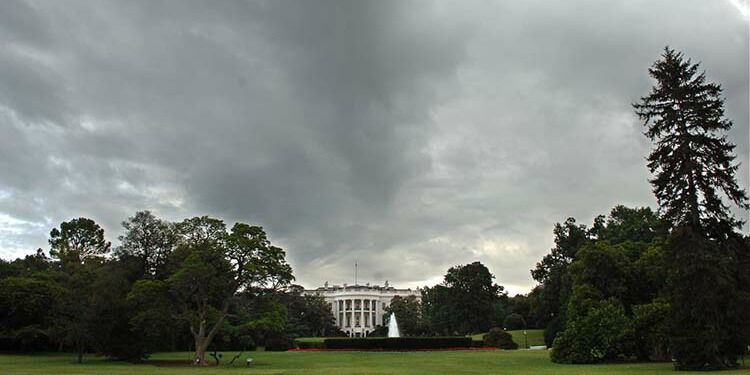