As is so often the case with events in election years, the ongoing unrest and violence in American cities is simultaneously an urgent matter of public policy and a political football. Politicians of both parties often blur the distinction between these two conditions on the stump, so it is fitting that the president has now codified the issue’s nebulousness in an executive order.

In a presidential memorandum published Wednesday evening, the president directed executive agencies to strip federal funding from American jurisdictions that are “permitting anarchy, violence, and destruction in American cities.” The memo sounds muscular enough, but a glance under the hood reveals that, like so many executive orders, it doesn’t really do anything.

The stated aim of this presidential order is to strip federal funds from cities that have descended into “anarchy”—specifically, Washington D.C., New York City, Portland, Oregon, and Seattle, Washington. The memo further directs the Department of Justice to establish a definition of what constitutes “anarchist jurisdictions”—i.e., municipalities that fail to take “reasonable measures to counteract” criminal activities; those in which local government “unreasonably refuses to accept offers of law enforcement assistance from the federal government,” or have taken actions that “disempowers and defunds police departments.” From there, the Office of Management and Budget must figure out some legal rationale that would legitimize the withholding of congressionally appropriated funds from those localities. The order doesn’t even specify the federal grants that the White House wants to put on hold.

The timetable for agencies to meet these subjective criteria are such that you’re unlikely to see any of these policies implemented—at least, not before Election Day. And that assumes they survive a court challenge, which many observers seem to believe is a remote prospect. Just as courts struck down the president’s efforts to defund so-called “sanctuary cities” on separation-of-powers grounds (Congress, not the president, wields the national wallet), these orders appear to flirt with the same infringement of federalist principles and practices.

So, if this isn’t an effort to address a public-policy issue—and, to be fair, there isn’t much the president can do about a municipality that declines to enforce state and local ordinances—then it can only be political. And as attempts at political messaging go, this one is particularly fraught both for the president and the country.

This pronouncement fits a pattern of behavior the president should have long ago abandoned: He over-promises and underdelivers. Trump has spent the summer insisting that he would “restore law and order” by any means available to him. And to the extent that the chief executive of the federal government can deploy federal agents to protect federal property, Trump has done just that. But the president’s supporters were told that he would reimpose discipline on America’s unruly cities, and that he cannot do. Why the president has opted to hoist the burden of his opponents’ failures onto his own shoulders is a mystery.

If Trump’s core supporters are let down by his tough talk, the persuadable voters he needs to convert before Election Day seem utterly repulsed by it. An ABC News/Ipsos poll released this week found that fully 55 percent of all Americans believe Donald Trump’s style of talking “about the protests” “makes the situation worse.” Lest you think using the term “protests” as a euphemism for “violence” confuses the situation, that same poll found 56 percent believe Joe Biden “would do a better job keeping me and my family safe” and nearly 60 percent said Biden “would do a better job reducing violence in the country.” These results are in line with a recent Quinnipiac University poll, which described its findings starkly: “Fifty percent of likely voters say having Donald Trump as president of the United States makes them feel less safe.”

But maybe the president’s strategy isn’t to appeal to the existing universe of voters at all. According to the Wall Street Journal, the Trump has pinned his reelection hopes on creating a whole new electorate by driving up turnout among white voters without a four-year college degree—a constituency that is by far Trump’s most devoted demographic, but which turns out to the polls at reliably dismal rates. If this executive order is representative of that strategy, it is an explicit appeal to the politics of resentment.

Trump’s objective here isn’t to restore order in America’s cities or to create a series of positive incentives that might compel progressive-led urban areas to throw the activists in their base overboard. The effects of this proposal, if it were implemented, would only be to augment the hardships endured by the constituencies that have voted themselves into this predicament. If you’re one of the millions of American voters who are repulsed by the breakdown of civil society and appalled by the politicians who pretend that rioting, looting, vandalism, and terrorism are legitimate political expressions, this executive order makes a mockery of your concerns. It is worse than useless.

This memorandum may only be valuable insofar as it provides a window into how those in Trump’s orbit understand the politics of this moment. It suggests that they don’t think voters want productive solutions to the threat posed by lawlessness—they just want to mete out some pain themselves. That is just another iteration of the disfiguring hatreds we see on display every night in American city streets. And hate is what they think voters want, we’re going to get a lot more of it between now and November 3. 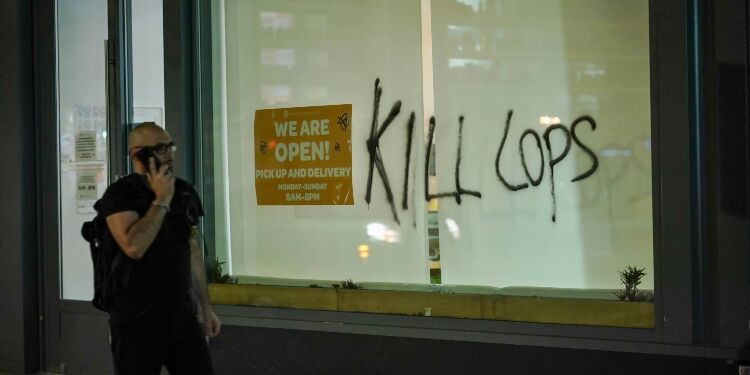