On Friday, Anthony Weiner appeared in federal court and pled guilty to the charge that he had inappropriate, sexually-charged communications with a minor. The fall of the once promising politician, a courtier to the Clinton Dynasty and a former Democratic rock star, has been called “sad,” “a tragedy,” and “depressing.” Democrats would do well to devote more serious scrutiny to their roles in enabling a person with pathological compulsions.

For the left, Anthony Weiner occupies a minor place on a sprawling list of reasons why Hillary Clinton lost the 2016 race. He is situated somewhere between the Russian meddling and the nation’s latent misogyny. That dissociation has allowed Democrats to put off their reckoning with the real reasons the heir to a popular Democratic president lost to a boorish political novice. When Democrats finally get around to performing a dissection of their party’s 2016 prospects, Anthony Weiner’s conduct will take a prominent place. Democrats will then be compelled to confess that their permissive attitude toward Weiner’s erratic behavior helped no one.

Anthony Weiner spent more than a decade in Congress little noticed by those outside New York City. Then, in 2010, he earned celebrity status among liberals for a frothing tirade delivered on the House floor attacking Republicans for failing to endorse a post-9/11 relief bill. The $7.4 billion health-care bill for Ground Zero workers failed by more than 20 votes despite the Democratic Party’s 36-seat majority (Democrats sought a two-thirds majority to prevent Republicans from adding “embarrassing” amendments to the bill, like one that would have prevented the allocation of those funds to illegal immigrants). But Weiner’s tantrum deflected blame onto the GOP, and the liberal entertainment complex ate it up.

What appeared to neutral observers to be a breakdown on the floor of the House of Representatives was dubbed laudable “passion” by the likes of Comedy Central host Jon Stewart, and so Democrats ignored the warning signs. This was hardly the first occasion Weiner engaged in abusive and ugly behavior that liberals endorsed as evidence of his “fearless” enthusiasm for progressivism. Less than a year later, the congressman from New York would find himself in a scandal of his own making when a lewd image he accidentally posted to his public Twitter account forced him to resign from Congress.

In a sober and circumspect political culture, that would have been the end of Anthony Weiner. But it wasn’t. In 2013, Weiner tried to engineer a comeback by mounting a second bid for mayor of New York City (his first attempt being in 2005). Less than two months into that campaign, Weiner was exposed as having engaged in embarrassing online affairs under the pseudonym “Carlos Danger” with as many as ten women (one of whom went by the name of “Sydney Leathers” and became a regular feature on the talk-show circuit).

By now, it was clear that this self-destructive behavior was the product of an addiction. It was one that humiliated his wife, longtime Hillary Clinton aide Huma Abedin, who was forced to stand by Weiner as he confessed to one impropriety after another. It was a compulsion that destroyed his political career in Congress and scuttled his bid for the mayoralty. And it was one that estranged his familial relationships and jeopardized the well-being of his son. Perhaps, in part, because the Clinton Family’s practice is to ride these scandals out, Weiner remained a close member of the Clinton circuit.

In January of 2016, the documentary film Weiner premiered at Sundance. The movie chronicled his manic behavior, his crass displays of contempt toward all but his most fawning admirers, the collapse of his political career, and his descent from rising star to punchline. “It was astonishing for Abedin to have allowed such a film as Weiner to be made at all—much less to put a high-definition, close-up lens to the most humiliating chapter of her life,” marveled Washington Post columnist Karen Tumulty. It was a wonder, particularly because of the threat it posed to Hillary Clinton’s political aspirations. Weiner was a self-obsessed time bomb, and he exploded at the worst possible moment for Democrats.

On October 28, FBI Director James Comey informed Congress, as he was obliged to do under threat of perjury, that Abedin had forwarded emails from Clinton’s illicit server to Weiner’s computer. The FBI was combing that computer as part of the investigation into allegations that the former congressman had illegal sexual contact with an underage girl.

By Clinton’s own admission, this was the moment that may have undone her career. The revelation regarding Weiner’s latest episode of misconduct had already destroyed his marriage. Earlier that year, Weiner checked himself into a rehabilitation clinic to finally seek help, and Abedin announced her intention to separate from her husband. But the damage was done, and so many lives were harmed in the process.

Why didn’t Democrats recognize the signs earlier? Why were they cheering along when Weiner flipped off reporters, yelled at constituents, and engaged in unbridled hysterics? Why were the Clintons so protective of Weiner when he was obviously a liability? Why was his unhealthy behavior enabled for so many years? And why do Democrats still refuse to acknowledge their role in making sure a sick man never got the help he so clearly needed? Maybe that will be addressed in the Democratic Party’s 2016 autopsy, whenever they get around to deciding they need to conduct one. 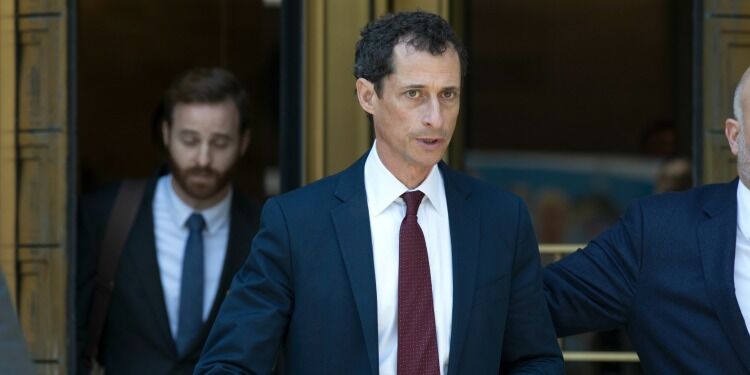