Three hundred ninety-eight out of 432 seated members of the Democrat-led House of Representatives voted on Tuesday to condemn the Boycott, Divest, and Sanction (BDS) movement, an amalgam of anti-Zionist interests that advocates for the delegitimization and ostracization of all Israeli institutions. It was a vote that Democrats would not have had to take but for the upstart progressives in their midst. The party’s progressive House freshmen have made a name for themselves by pushing their caucus to the left on a series of issues, one of which is support for America’s strategic alliance with Israel. They pushed too far.

Last week, Congresswomen Ilhan Omar and Rashida Tlaib—two members of the quadrumvirate its members refer to as the “squad”—introduced a resolution backing BDS under the auspices of supporting the right of anyone to boycott anything. This cover story was illustrative of how unpopular their attempt to legitimize BDS was. Twenty-seven states have adopted measures opposing the boycott of Israeli goods or imposing costs on institutions that comport with BDS’s demands. This March, Gallup found that 59 percent of American adults sympathize with Israel in its conflict with the Palestinian Authority. Only 21 percent backed the entities in Gaza and the West Bank. Although this represents a modest decline in support for Israel from 2018, pro-Israel sentiment remains palpable among a majority of Republicans and independents and a plurality of Democrats. Only among self-described “liberal Democrats” has sympathy for Israel collapsed to a virtually non-existent 3 percent.

Those “liberal Democrats” can find their champions among the 16 Democrats who opposed the Democrat-sponsored anti-BDS resolution.

Omar tried to drum up support for her competing resolution in support of BDS by likening Israel to Nazi Germany and comparing the Hamas-linked movement to the Boston Tea Party. Tlaib, too, echoed these themes. The anti-BDS resolution, she said, “attempts to delegitimize a certain people’s political speech and to send a message that our government can and will take action against speech it doesn’t like” (a federal judge in Arkansas has already dismissed Tlaib’s constitutional objections). “My concern with being overly punitive on nonviolent forms of protest is that it forces people into other channels,” said squad member Alexandria Ocasio-Cortez. The congresswoman has a habit of speaking in vague terms so that she can plausibly deny the obvious implication, but her meaning is clear enough; if boycotting Israeli goods isn’t an option, opponents of the Jewish state will be forced to take more drastic measures.

These arguments were not enough to sway an overwhelming majority of the Democratic Caucus. They weren’t even sufficient to convince squad member Rep. Ayanna Pressley, who voted with the majority.

Though a vote in support of Israel’s right to produce and export goods abroad was not a tough one, the decision to hold the vote was. Progressives lobbied leadership against holding such a vote, noting that it would be construed as an attack on the Democratic Caucus’s progressive members just days after Donald Trump had attacked them. Even moderate Democrats expressed concerns about the prospect of exposing the ideological fissures within the party’s House majority. But whereas a union between the Congressional Black Caucus and the Progressive Caucus forced Democrats to scuttle a resolution condemning Omar’s repeated anti-Semitic remarks, that alliance has been strained in recent weeks. The squad climbed out on a limb, and House Democrats sawed it off.

Say what you will about Donald Trump’s sloppy and counterproductive execution, the president knows how to pick his targets. Trump’s effort to elevate the most progressive members of the Democratic Caucus beyond their relative statures in Congress is a clever and calculated strategy. The vote on this resolution betrays how discomfited Democrats are by the views of their most impetuous members (as if more confirmation was needed). Democrats are happy to wrap their arms around the “squad” so long as they don’t have to talk about what its members actually believe. The GOP’s job will be to make that balancing act untenable. If this vote is any indication, the GOP’s job won’t be all that difficult. 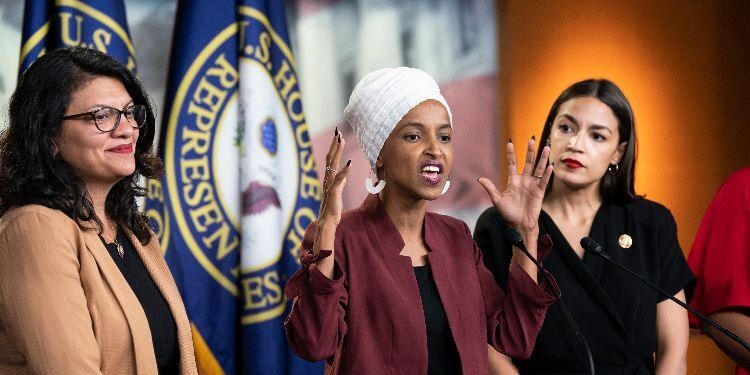