America—possibly including many within Donald Trump’s campaign team—was entirely unprepared for the election of the celebrity billionaire to the presidency. Perhaps none more so than the nation’s youngest voters, who took to the streets in several cities on Wednesday night to protest the outcome of the national vote. Chanting “not my president” and a handful of profanities, what these student-aged protesters lacked in perception they made up in zeal. The irony here is that the source of their unguarded angst–a condition shared by their liberal elders–is the fruit of their labors. Whereas conservatives once eschewed it, Donald Trump harnessed identity politics and used it to his advantage. He Balkanized the electorate, and in so doing secured a majority in the Electoral College.

The exit-polling data from Tuesday evening will become more useful after it is weighted to reflect total turnout. What we do know now is that Donald Trump will likely have received fewer votes than Mitt Romney and, if the current tally holds, John McCain. He won not just because Hillary Clinton received a staggering 6 million fewer votes than Barack Obama won in 2012, but also because the distribution of Trump’s support was far more efficient than Clinton’s.

From a Republican perspective, Trump pulled off the impossible. He won states that Republicans had not won for almost 30 years. Wisconsin, Pennsylvania, Michigan—to say nothing of perennial swing states like Ohio, Florida, and Iowa—fell into Trump’s camp. This was a dramatic victory mitigated only by conservative’s woeful perspective: Donald Trump had to run like a Democrat to pull it off.

Trump did not win the election solely on the backs of the disaffected white middle- and working-class voters who made up his base of support. The collapse of enthusiasm for Clinton among Obama’s coalition ensured that Trump’s vote was not entirely monochromatic. We cannot yet accurately know how many minority Americans voted for Trump. What we can say is that the majority of Trump’s vote was less educated, over 45, and predominantly rural. While there was a dramatic swing among lower-income voters toward Trump, Clinton still won a majority of the lowest income voters whereas Trump managed to win a majority or plurality of every voter with an income over $100,000 annually.

So what does the lower-income, white, evangelical from southwestern Ohio share with the upper-income moderate Democrat from outside Grand Rapids? The factors that led them to unite into a coalition to vote for Donald Trump were manifold: stagnant incomes, frustration with Washington, a sense of alienation from coastal elites, et cetera. This unity has created an identity-based voting bloc out of Trump’s white supporters in much the same way African-Americans have voted as a bloc for Democrats despite their disparate circumstances.

Donald Trump contended that free trade had made America less prosperous and that elites had sacrificed American wealth to secure their own personal interests abroad. He claimed that immigrant labor and outsourcing had destroyed American manufacturing. China, Mexico, and illegal immigrants are enemies, he insisted. Their victims are implicitly the last demographic that it is safe to ignore and to malign: whites.

Trump’s voters have a point. They contend that political correctness is a cudgel used by the left only to silence the demographically undesirable (white, male, and rural). They chafe as the selfless members of law enforcement and the military are denigrated by the influential. They see their livelihoods choked off by regulation and they see their communities transformed by those who do not share their culture or values. What’s more, they are told that all these concerns and the associated sense of estrangement are bigotry for which they must be punished.

Trump tapped into this resentment, and it was remarkably successful. But make no mistake: this isn’t conservatism. It’s not even realistic. American heavy industry isn’t coming back, no matter how expensive a Trump administration makes the import and purchase of the everyday items that Americans buy in bulk at Wal-Mart. Politically correct speech isn’t going to disappear; nor will America’s cultural elites. It will be Donald Trump who will ascend to societies rarefied peaks, which is all he ever wanted. The nostalgic appeal of his promises, however, which were simultaneously revanchist and sentimental, created a Republican electoral coalition out of whole cloth. Success begets imitators, and it is no doubt that Donald Trump will now have plenty of those.

The tragedy in this for conservatives is that Republicans will likely defer now to Trumpism as a result of this stunning electoral victory. Because he won so convincingly, the Republican Party will likely bet big on demography, identity, Balkanization, and the politics of division. It works. Liberals in the streets bemoaning Trump’s divisive rhetoric and his naked appeals to tribal unity are staring at their unforgiving reflection. It would be funny if it weren’t so tragic. 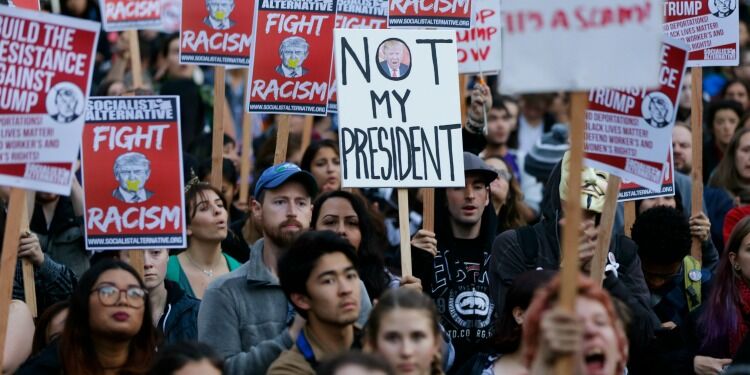