Without a clear understanding of the president’s predicament, it is difficult to accurately evaluate what is moving Barack Obama to make so many mirthless appraisals of the bitter state of partisan politics. Quite unlike his first term, President Obama’s second term accomplishments are, with rare exception, written in sand. They are positioning statements, attitudinal projections, and executive “actions” – not even executive “orders,” which would imply some legal authority – and they are as impermanent as is his administration.

Obama laments the “meanness” of politics and the “rancor and suspicion” he has been unable to counteract. In the second breath, however, he blames this condition on the exigencies of politics itself, which is to say the hoi polloi who make up the electorate. We’ve heard the president casually take some blame for this state of affairs, but he has avoided a self-critical audit of the actions he took which alienated his political opponents and hardened partisan affiliations. We have, however, heard about the president’s regrets from a source with perhaps even more force of moral suasion and authenticity than the president himself: his press secretary.

White House Press Secretary Josh Earnest revealed on Wednesday that the president “regrets the decision he made” to vote to filibuster the nomination of Samuel Alito to the Supreme Court in 2006. Earnest said that Obama and the rest of the minority Democrats in the U.S. Senate appeared to prefer throwing “sand in the gears” rather than offering substantive arguments against Alito’s ascension to the bench. Hindsight confers clarity, I suppose. Oh, not the hindsight of a decade’s worth of reflection and regret. Hindsight, as in, a little less than 24-hours after a press conference face-plant.

When asked by a reporter on Tuesday about his attempt to filibuster Justice Alito, the president’s response was flailing, ad-libbed, and utterly unconvincing. “You know the — a — look,” Obama began. “I think what’s fair to say is that how judicial nominations have evolved over time is not historically the fault of any single party.”

“This has become just one more extension of politics,” the president continued. “And there are times where folks are in the Senate, and they’re thinking as I just described primarily about, ‘Is this gonna cause me problems in a primary? Is gonna cause me problems with supporters of mine?’ So people take strategic positions, and I understand that.”

No one needs a translator for that. The president is admitting, albeit in a convoluted and self-inflated manner, that Democrats engaged in a showboating effort to mount some perfunctory resistance to Alito not because he was unqualified but because he was a Republican presidents’ nominee. Now that Obama is hoping to install a third justice on the nation’s highest court in the waning days of his second term, he regrets the precedent he helped set. Simple as that. As for the president’s expressions of nagging remorse delivered through his press secretary, it’s fair to conclude that Obama doesn’t really mean it.

If the president were serious about healing some of the partisan divisions that seem to be tearing the nation asunder, he might consider following in his predecessor’s footsteps. Speaking before hundreds of mourners at Washington’s St. Matthew’s Cathedral in 2005, President George W. Bush eulogized Supreme Court Chief Justice William H. Rehnquist, the last justice to pass away while still occupying his seat on the bench. “We remember the integrity and the sense of duty that he brought to every task before him,” Bush told the crowd of law clerks, congressmen and women, federal officials, and, most importantly, the late justice’s family. Barack Obama chose not to follow W’s lead.

Not only will the President of the United States decline to eulogize a late Supreme Court justice who sat on the bench for 30 years, he will not even attend the funeral. Vice President Joe Biden will appear at the Saturday service in the president’s stead. The president will instead pay his respects to Antonin Scalia on Friday, when the justice lays in repose in the Great Hall of the Supreme Court. “When asked whether Obama’s Saturday plans include golfing, Earnest stressed instead that the president believes it is important to honor Scalia’s life and service,” NBC News reported. Read into that what you will.

If Barack Obama were truly broken up over the bitter political rebellion flowering all around him, he could lead by example. He could perform a grand gesture in the form of a Supreme Court nominee who reflects the values and reverence for originalism shared by the late Justice Scalia. He could eschew partisan gamesmanship and election year positioning. He could flex those vaunted rhetorical muscles in the effort to heal the country’s wounds. At the very least, he could make the effort to appear at the service. And if Obama meant half of what he says when he bemoans the fractious state of the nation, he would. But he doesn’t. 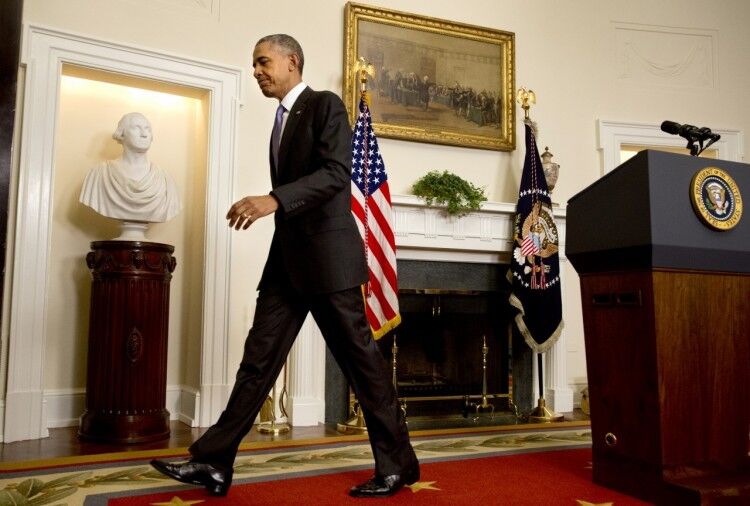