“What we are saying, loudly and clearly, is $7.25 an hour, the current federal minimum wage is a starvation wage,” Sanders said at the outset of the 2016 election cycle. People working 40 hours per week, he added, “have a right not to be living in poverty.” The issue soon became a rallying cry among progressive activists, and it was adopted as Democratic Party orthodoxy not long after that. Hillary Clinton embraced the $15 plan, and a handful of left-leaning states passed it into law—changes that Sanders was either credited with or took credit for himself. He’s marched with striking workers and held press conferences lambasting large employers for abusing their employees. He’s attacked the executives at companies like Walmart, Amazon, McDonald’s, and Disney for their compensation practices, even going so far as to inform these firms how they should distribute their profits.

Sanders’s bombastic populism always contrasted with his personal wealth (and his aggressive defense of its legitimacy), but even his supporters were willing to look past the Vermont senator’s imperfections when the soul of the Democratic Party was on the line. Four years later, and with several Democrats competing for Sanders’s share of the populist progressive vote, he is no longer receiving the benefit of the doubt.

In May, Sanders’s presidential campaign became the first of its kind to unionize. It was a decision that defied campaign professionals who warned that it makes no sense for a popup operation designed to scale up rapidly and exist for only about a year to invite the kind of prolonged haggling typical of a unionized workforce’s engagements with its employers. If only to convey to voters that he was willing to put his money where his mouth was, Sanders consented.

The Sanders campaign proved to be especially flatfooted in negotiations with the United Food & Commercial Workers Union Local 400, of which his campaign staffers were now members. The union won the right to a salary equivalent to a $15 minimum wage for campaign workers, as well as platinum-level health care, paid vacation, sick leave, and a graduated pay scale for specific roles. Bernie Sanders interns get $20-per-hour with health benefits. Managers in the Sanders campaign even had their salaries capped, which even the union’s spokesperson confessed was “extremely unusual.” But Sanders’s idealism soon ran head-first into the practical problems associated with running a unionized enterprise.

Last week, the Washington Post received a cache of documents from union organizers and Sanders campaign employees that signaled the start of a new, more public phase of labor negotiations. Of particular note was a letter addressed to campaign manager Faiz Shakir shaming the campaign for failing to live up to the candidate’s ideals. It accused the campaign of overworking field organizers—an entry-level role that is usually occupied by unpaid volunteers, but which the Sanders campaign compensates with a $36,000 annual salary—and failing to pay them the equivalent of a $15-per-hour rate. Theirs were “poverty wages,” the letter alleged. In response, the Sanders campaign did what any self-respecting employer would do: It capped employees hours. Problem solved!

“It does bother me that people are going outside of the process and going to the media,” a frustrated Sanders told the Des Moines Register when asked about the letter that found its way to the Post. “That is really not acceptable. It is really not what labor negotiations are about, and it’s improper.” Maybe the senator thinks those giant inflatable rats are just a peculiar aesthetic choice, but it’s highly unlikely. Hardball tactics are a regular feature of the occasionally adversarial process of labor negotiations with a private enterprise.

Sanders is now in a unique bind. He cannot simply go the route taken by McDonald’s, which has responded to the tight labor market and increasing state-level minimum-wage statutes by automating drive-throughs, replacing order-takers with touchscreen kiosks, and installing robotic fryolators. The job of the campaign canvasser will always require a human touch. Moreover, he’s operating an enterprise in an especially competitive sector—the race for the presidency—in which he’s facing competition from several other equally well-heeled and nimble concerns. There’s a reason most of the rest of the 2020 field has declined to allow their campaign staffs to bargain collectively.

For Sanders to engage in the same practices he finds so reprehensible in the private sector takes a special kind of obliviousness. The Sanders campaign has effectively made the case against an arbitrary blanket doubling of the national minimum wage better than the policy’s opponents ever could. 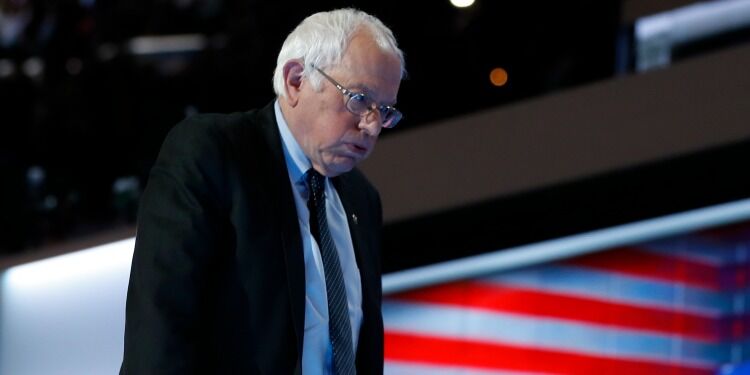