Rarely does a story implode as spectacularly as the New York Times’ latest effort to resurrect the claim that Justice Brett Kavanaugh was a teenage sexual predator.

By now, you know the facts: The Times published an excerpt from a forthcoming book alleging that another woman suffered the same form of abuse and objectification from Kavanaugh that was alleged by another accuser, Deborah Ramirez. No sooner had the universe of liberal political observers and politicians worked themselves up into a frenzy than the story fell apart. The woman whose uncorroborated experience supposedly substantiated Ramirez’s uncorroborated assertions wasn’t even the one making these accusations. Rather, they came from a Washington D.C. attorney with conflicts of interest who did not contact the Senate Judiciary Committee during Kavanaugh’s confirmation proceedings. What’s more, she doesn’t even remember the experience that was supposedly so traumatizing—a revelation that was inexplicably omitted from the Times’ original draft.

The resurrection of the controversy involving Kavanaugh’s conduct as a teenager has done the New York Times no favors. Nor has it been a boon to Democrats, who have lost control of the narrative and are turning on one another in a failing bid to restore some semblance of competency.

“I think that, you know, what we have seen, frankly, is we’ve seen a suppression of evidence,” Sen. Kamala Harris told MSNBC host Rachel Maddow. “If the bodies that are charged with actually investigating fail to do it and block it off, or tailor it, I would argue that’s suppression of evidence.” It’s entirely unclear which persons or institutions the senator is alleging withheld evidence, what that evidence might be, or who should have been privy to it. There were no follow-up inquiries from the host, nor should there have been. Why should Maddow take these frivolous accusations more seriously than the senator does herself?

Harris and a number of her fellow Democratic presidential aspirants, including Elizabeth Warren, Bernie Sanders, Beto O’Rourke, Cory Booker, and Julian Castro, have called for the impeachment of Justice Kavanaugh based on the Times reporting. Their assessment of Kavanaugh’s culpability in an alleged assault has not changed even as the original reporting has undergone substantial revisions. And even though the Democratic leaders of the House and Senate judiciary committees have all but dismissed the prospect of impeachment proceedings, Kavanaugh’s critics continue to exaggerate tensions within Democratic ranks.

“Sexual predators do not deserve a seat on the nation’s highest court and Brett Kavanaugh’s confirmation process set a dangerous precedent,” read Rep. Ayanna Pressley’s libelous statement announcing the introduction of a resolution to impeach Kavanaugh in the House. “We must demand justice for survivors and hold Kavanaugh accountable for his actions.” Pressley’s have garnered the support of the Democratic Caucus’s most media-starved members, including Reps. Rashida Tlaib, Ilhan Omar, and Alexandria Ocasio-Cortez. Even if it were to pass the House, the Republican-controlled Senate would not vote to convict the justice. And yet, that outcome would suit some of Kavanaugh’s critics just fine. Sen. Harris, for example, confessed that if a resolution to impeach the justice died in the U.S. Senate, it would expose how Mitch McConnell had been “coddling and frankly not holding [the Trump administration] to account.”

Not all Kavanaugh’s harshest detractors are keen to see him removed from the federal bench (if such an outcome was conceivable, which it is not). Last year, Debra Katz, the lead attorney representing Kavanaugh accuser Christine Blasey Ford, told CNN that her client does not want Kavanaugh impeached. And why would she? In April, Katz told a friendly audience that she and Blasey Ford both were partially “motivated” to testify to the effect that Kavanaugh was a sexual abuser because it would affix an “asterisk” next to his name and call into question the legitimacy of any decision he renders to alter the status quo on issues related to abortion rights. What political purpose would it serve them to see Kavanaugh replaced with a justice whose character has not been similarly besmirched?

Not only did the Times reporters manage to further exculpate Kavanaugh by impugning the credibility of his accusers, it further undermined Blasey Ford’s claims by revealing that her star character witness, Leland Keyser, does not believe her friend was assaulted by the justice. What’s more, she contends, her refusal to corroborate Blasey Ford’s assertions resulted in threats and intimidation—a disturbing revelation that those who insist we should “believe women” have faithfully ignored. Indeed, the facts of this case are strikingly irrelevant to those who cling to the article of faith that Kavanaugh’s youth was marred by episodes of sexual misconduct.

The strained efforts by politicians and media outlets to insist that the absence of evidence against Kavanaugh amounts to an indictment of his conduct and character has spilt the Democratic Party, unified their opposition, energized Republican voters, and sacrificed the credibility of the left-leaning news outlets that dedicated themselves to the promotion of a perfidious narrative over the plain and simple truths of the case. It’s a testament to the impenetrability of the bubble in which they operate that Kavanaugh’s harshest critics don’t seem to recognize how badly this is going for them. 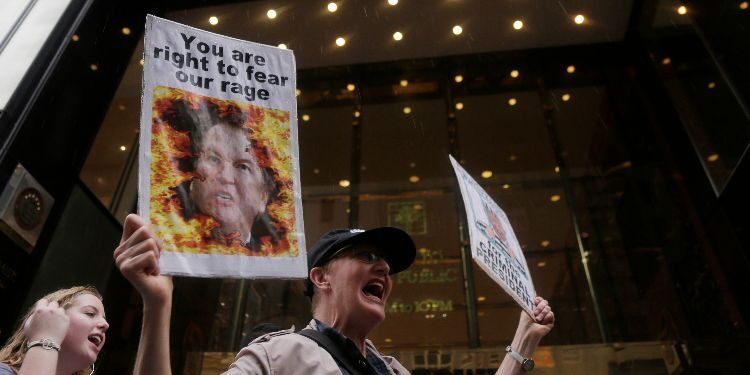