It has been impossible to miss the shift in tone among liberals when criticizing Carly Fiorina. The timbre of their opposition to the surging Republican candidate has evolved from dismissive and aggravated disappointment to disproportionately seething rage.  Among liberals, Fiorina has inspired passionate resentment, and it isn’t hard to see why. She has rather deftly infiltrated the left’s comforting and previously impenetrable habitat of fictions, and they vehemently resent the contamination of the fragile artificial environment they have constructed for themselves.

For millions of Americans who watched the second GOP presidential debate on CNN, the moment that briefly focused on the revelations exposed by a series of undercover videos featuring unsavory Planned Parenthood executives and practices was the first they’d heard of that metastatic scandal. While Fiorina’s rivals primarily burnished their conservative bona fides on the matter of stripping the abortion provider of its taxpayer-provided largess, Fiorina recognized the need to educate the public on the nature of that scandal. It is testament to her abilities as a communicator and the scope of the threat to Planned Parenthood’s privileges that the left has spent the weeks that followed the debate trying to discredit Fiorina and her attack on that favored liberal advocacy organization.

“As regards Planned Parenthood, anyone who has watched this videotape, I dare Hillary Clinton, Barack Obama to watch these tapes,” Fiorina declared as her voice reached a crescendo of indignation. “Watch a fully formed fetus on the table, its heart beating, its legs kicking while someone says we have to keep it alive to harvest its brain.”

For this claim, Fiorina has become partisan Democrats’ public enemy number one. Over the weekend, a group of pro-Planned Parenthood protesters ambushed the candidate and pelted her with condoms. “Carly Fiorina offsides for telling lies,” the pink-shirted protesters chanted. The assault, and the level of anger that inspired it, should not have surprised any outside observers. This animus has been incubated by the fatuous and misleading coverage of Fiorina’s remarks. Her contention, liberals aver repeatedly, was entirely fabricated. In seeking to correct the record, liberals have only muddied it further.

“The enormity of the fabrication surprised me; the fact that nobody had ever seen this extraordinary smoking gun before stunned me; the fact that not one of the journalists moderating the debate followed up on her claim surprised me,” Slate’s Dahlia Lithwick exclaimed. “Nobody — not even Fiorina’s staunchest defenders — can say that these videos that clearly don’t exist are real.”

“[T]he things Fiorina describes — the legs kicking, the intact ‘fully formed fetus,’ the heart beating, the remarks about having to ‘harvest its brain’ — are pure fiction,” Vox’s Sarah Kliff insisted.

When a pro-Fiorina super PAC tried to educate an outraged left-leaning press as to the nature of the scandal by reproducing directly from the Planned Parenthood videos the scene she described on the debate stage, the organization was accused of making it all up.

“Since it’s not actually possible to watch the footage Fiorina described, the PAC supporting her recently tried to create it,” the Nation’s Zoë Carpenter confidently asserted. “A heavily-edited one-minute video posted to YouTube on Saturday and emailed to her supporters contains clips of Fiorina at the debate, interspersed with images and audio cobbled together from a variety of sources.”

Much of the left’s self-satisfied critiquing of Fiorina is merely mimicking misleading reporting on the subject. The Hill’s Sarah Ferris contended accurately that the images Fiorina described were stock footage provided by the Center for Bio-Ethical Reform. Those images were shown over a testimonial from a whistle-blower who described a Planned Parenthood practice that consisted of cutting open a 19-week-old fetus’s face to harvest its brain. She inaccurately described that infant as “stillborn”; a claim that has found its way into even self-described fact-checking outlets. This contention might have been struck from Ferris’s copy had she bothered to review the footage. Stillborn infants tend to be deceased when they are pulled from the womb. This was not the case in the videos Fiorina accurately described, as The Federalist noted:

This is inaccurate on multiple counts. The video shows two different babies, neither of whom are stillborn. One was an image of Fretz, who was not a stillborn baby, but was born prematurely at 19 weeks and died in his parents arms. This image of Fretz appeared during the 8:59 minute mark of the video, where he appears to be wrapped in a blanket and have a clip on his umbilical cord to keep it from getting infected.

Earlier in the video, around the 5:56 mark, there is footage of another baby boy around the same gestational age as Fretz who is not stillborn either, but a baby who survived an abortion and was left in a metal bowl to die. In the footage, he kicks his legs and twitches his arms during the final moments of his life, and a pair of forceps lays beside him. The footage was provided by The Center for Bio-Ethical Reform, a pro-life organization headquartered in Lake Forrest, California.

What the Center for Medical Progress did was to indulge in the common journalistic technique of breaking the visual tedium of an interview up with illustrative B-roll. If journalists are suddenly going to become critical of the use of stock footage in reporting packages to illustrate events that occurred where cameras were not present, they are going to have their hands full. Of course, to criticize journalistic production techniques in that fashion would be intellectually dishonest. That has not stopped the left from contending by implication that the Center for Medical Progress and former StemExpress technician Holly O’Donnell were lying, and the event she described never happened merely because cameras were not present to witness it.

For two weeks, Fiorina has been made to answer for what the political press has universally dubbed not merely the conflation of B-roll footage with actual events – an honest and deserved critique of her characterization of the Planned Parenthood videos – but a willful misrepresentation of the specifics. There is a reason for this: the image of the moving, likely viable fetus out of the womb – an infant born alive during a failed abortion attempt – is so grossly disturbing that it has the potential to move the cultural needle. Those images present an existential threat to those who would advocate for unrestricted access to elective abortion. The videos themselves cannot be discredited in the absence of an investigation, but the Republican candidate who has become their chief evangelist can be. In that way, the liberal activist and journalistic classes can perhaps vicariously delegitimize the bombshell Planned Parenthood videos.

“This is about the character of our nation,” Fiorina warned from the debate stage. To her credit, she has refused to back down even amid a withering assault on her credibility from the left. The intellectual self-deception that they have summoned in order to contend that Fiorina made her claims from whole cloth is borne more out of fear than frustration. Their bubble has been popped. 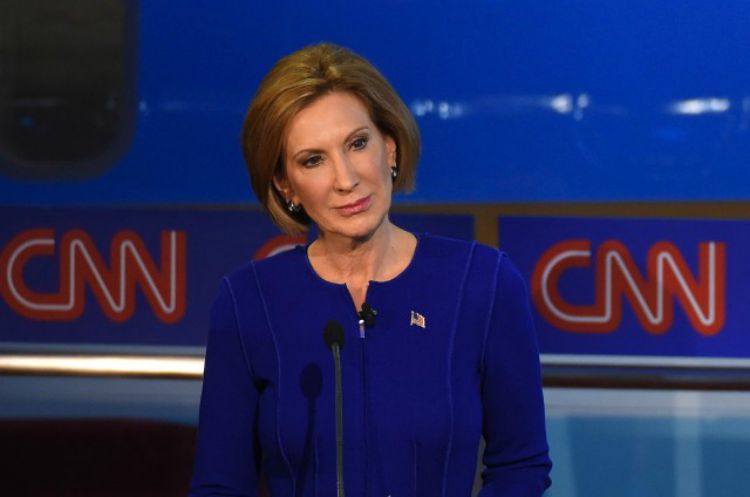