According to the president and his defenders, there’s nothing much to see here; Donald Trump has admitted to everything.

As he confessed, and as the telephone transcript he released demonstrates, the president did pressure the Ukrainian government—a government Trump admits is replete with corruption—to direct its institutions toward the investigation of a family member of one of his domestic rivals. Trump has not explicitly admitted to using as leverage the military aid Ukraine had been receiving at regular intervals since 2014 but which dried up inexplicably before this call. But, Trump insists that “it would probably, possibly have been okay if I did.” After all, Trump asked, “Why would you give money to a country that you think is corrupt?”

If this constitutes exculpation, it’s hard to imagine what kind of evidence the president’s defenders would see as incriminating.

And yet, if the president’s team were as confident in both their absolution and the president’s, they would almost certainly not be running for cover and throwing their colleagues under the bus. But that’s precisely what’s happening.

To hear the administration officials who spoke with the Washington Post tell it, it was Rudy Giuliani wot done it. The sources who spoke with the Post’s reporters describe an extensive but failed effort to get the president’s mind off the notion that Kyiv could be of instrumental utility in damaging one of his potential 2020 rivals, Joe Biden, ahead of the now-infamous July 25 call between the two heads of state. Those sources relate how White House Chief of Staff Mick Mulvaney executed Trump’s order to suspend Ukrainian military aid prior to that call, but say that it was Giuliani who first planted the seeds of this maneuver in Trump’s head.

“Rudy—he did all of this,” one of those officials told Post reporters. “This s***show that we’re in—it’s him injecting himself into the process.” Other officials with whom Post reporters spoke paint a similar portrait of Giuliani—a rogue operator executing his own foreign-policy vision in Ukraine without the consent of the president’s national security apparatus.

But Giuliani’s efforts to enlist Ukrainian officials in the effort to reexamine the propriety of Hunter Biden’s work with a Ukraine-based gas company could not have come as a surprise. As far back as May, the former New York City mayor made public his plans to travel to Kyiv with precisely that mission. “There’s nothing illegal about it,” Giuliani told reporters. “Somebody could say it’s improper.” The planned excursion by the president’s personal attorney was canceled amid the uproar that followed, but Giuliani never stopped lobbying Kyiv to reopen a closed investigation into the Bidens.

If Giuliani is being set up as the executor of this controversial enterprise, he’s apparently determined not to go down alone. In an appearance on the  Fox News Channel on Tuesday night, Giuliani alleged that his involvement in the campaign to influence the Ukrainian government wasn’t a rogue operation at all. “I never talked to a Ukrainian official until the State Department called me and asked me to do it and then I reported every conversation back to them,” he revealed while holding up his telephone, insisting that it contains the record of his contacts with State.

If Giuliani hoped to implicate Mike Pompeo and the State Department in all of this, Foggy Bottom is not playing along. “Mr. Giuliani is a private citizen and acts in a personal capacity as a lawyer for President Trump,” a spokesperson for the State Department wrote in response to Giuliani’s claims. “He does not speak on behalf of the U.S. Government.”

That dismissal, however, is a departure from how Pompeo himself described Giuliani’s efforts on Trump’s behalf as recently as this past weekend. When asked if the former mayor’s overtures to Ukraine were “appropriate,” Pompeo indirectly defended his actions by insisting that it was in the interests of the American people to determine whether the Biden family’s conduct in Ukraine was above board.

If this administration’s behavior were entirely untoward and coordinated, you’d think they would have their stories straight. Not only does Trump’s inner circle appear to be scrambling in their own defense, they are pinning the blame for their actions on each other. But if nothing sordid occurred here and it’s all a ginned-up controversy, why would any of this be necessary? 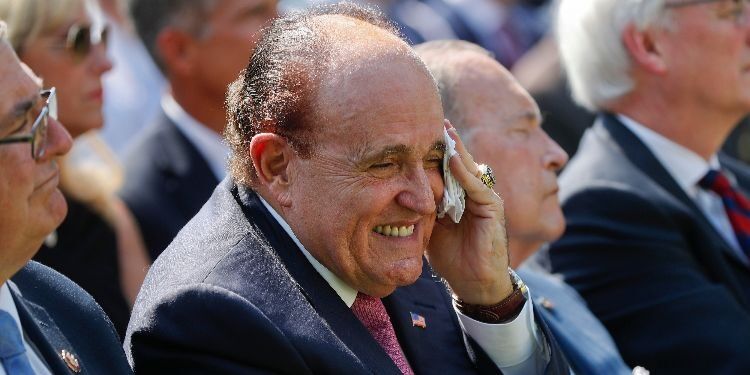