At the moment, there isn’t much appetite for silver linings among the anti-Trump right. The mood within the defeated camp is fatalistic, betrayed, and, even among those furiously scribbling a list of enemies to be purged upon the reclamation of their authority, characterized by creeping resignation to their fates. These are hard sentiments to begrudge. For the conservative movement, the situation is a dire one. The present circumstances facing this centuries-old political philosophy are not, however, fatal. Regrouping and rebuilding will be left to those who believe in conservatism as not merely a governing ideology but also the most effective method of social organization to promote cohesive communities and individual progress. Their task will be an arduous but not impossible one.

First, a clear enumeration of the conservative movement’s desperate straits. Barring a dramatic shift in the prevailing winds, Donald Trump will be the GOP nominee, and he will lose in November by margins unseen in decades. If the current polling of the race is accurate, Donald Trump will not be the only Republican candidate to lose a winnable race in 2016. Democrats will redirect much of their ample general election resources away from Trump and toward resurrecting their congressional and state-level legislative majorities. It is not yet clear how successful that effort will be, but there is evidence that indicates a Trump nomination will lead to a down ballot rout for the GOP’s vulnerable members.

The coming defeats will not be the kind from which the GOP could recover in a cycle or two. For conservatives within the GOP coalition, they are facing an existential crisis. Donald Trump’s brand of warmed-over statism and populist nationalism never made any pretense about being conservative. The celebrity candidate’s supporters insist that the conservatives who rejected him are being stubborn and petulant by not embracing the ultimate victor, but they are in fact being purged from the GOP. Now that the contest is over, and Trumpism has emerged victorious with a plurality of the GOP primary vote, his team insists that he will jettison the conservative voter from under the GOP tent in search of a unique coalition that does not presently exist. Trump advisors will seek to appeal to disaffected Democrats, centrists, or the tens of millions of Americans who have never voted in their lives but who do watch reality television. In the end, the coalition that votes for Donald Trump may contain conservatives, but it will not be a conservative coalition.

Moreover, the Republicans who lose their seats in November will be those in districts in which conservatism is not an easy sell. These will be the Republican legislators who dedicated their careers to the rebuilding effort after the party was gutted by anti-Bush electorates in 2006 and 2008. If the anticipated anti-Trump tsunami materializes, those GOP legislators who survive it will be entrenched in the reddest states and the most Republican districts – and a majority of them will likely have embraced Trump and Trumpism as the party’s guiding philosophy. There are still holdouts within the GOP coalition like Senator Ben Sasse and House Speaker Paul Ryan, who have declined to lend their support to their party’s presidential nominee, but that kind of resistance is rare and may ultimately be fleeting. Donald Trump will become the titular leader of the Republican Party, and it is baked into the DNA of a political officeholder to eventually rally around the top of the ticket. What remains of the Republican Party after January of 2017 may be a party hostile toward legal immigration, minority voters, free trade, a robust defense of American interests overseas, individual liberty, and bottom-up policy prescriptions to America’s challenges.

That’s the bad news. But all is never lost for those who are prepared to lose it all. Conservatives who understand the stakes of their ideological struggle must avoid the temptation to construct elaborate revenge fantasies and populate enemy lists. Their job will be to present a viable alternative to the stock mid-20th century progressivism embraced by the two major American political parties.

Part of what vaulted Trump to his present position is his claim that he and his supporters are the victims of so many vaguely conspiratorial forces — the most defined of which is the GOP itself. One of Trump’s most resonant contentions is that the primary process was rigged. He was right; it was rigged in his favor. The GOP designed a process by which the candidate with the most appeal to moderate Republicans and independent voters in open primaries on the coasts could win with a mere plurality of the vote. It was a process designed to favor the next Mitt Romney. They did not foresee that the next Mitt Romney was Trump.

The GOP hoped to limit the influence of the activist conservative voter who caucused and crusaded for his or her candidate. Although the deck has been stacked against this segment of the Republican coalition for years, their vision is rarely vindicated by posterity. By 2017, the core conservative voter may come to be regarded as the civic-minded pragmatist whose rigid dedication to principle wasn’t in retrospect self-defeating but righteous. These are the loadstars of the conservative movement in exile.

And for conservatives, it will be exile. While resignation is generally an unhelpful attitude, this is a condition conservatism must accept if it is to resist a fundamental and potentially permanent redefinition. Though unpleasant, this circumstance is not altogether disastrous. It is from exile that introspective ideological audits are conducted, dedicated allies are recruited, and revolutions are planned. Contrary to the complacent liberal self-affirmation, the conservative movement is not dying out. In fact, its most vivacious members may be its youngest.

While so-called millennial Republicans are less likely than their older counterparts to identify as conservative, and they are a minority within the Republican Party, a Trump nomination and subsequent loss could set the stage for a conservative restoration. A voter aged 30 in 2020 was just barely able to vote in 2008. He will have lived most of his life under Democratic administrations, and seen his economic prospects stagnate. Most of the present generation will be Democratic for the rest of their lives. Research suggests our politics at our formative years is rarely subject to change. As pollster Kristen Soltis Anderson observed, many young voters will continue to vote for the party with which they have always voted, as did FDR Democrats and Reagan Republicans. But while Trump may repair some of the damage, today’s teenagers who were too young to catch the fever of Hope and Change are much more skeptical toward the Democratic Party. If these voters are hostile toward Republicans, they are disillusioned with Democrats. Many will be voting for Hillary Clinton in November not out of love but fear of the alternative. Conservatism untethered to Republicanism presents a unique alternative.

Trump already struggles to appeal to this younger, more ideologically conservative Republican demographic. Among all young voters, he is reviled. Trump’s loss in November and a sense of alienation from a Republican Party that nominated him among young conservatives is an opportunity for a movement in the wilderness. Theirs will be a kind of conservative counter-culture. Unassimilated within the GOP, theirs is a new face on an old idea. These voters will certainly not be drawn toward the vision of the Democratic Party shared by their liberal peers, nearly eight in ten of whom have wrapped their arms around an unreconstructed Marxist. Unchained to any institution, alienated from their peers, and frequently drawn to rebellion, conservatism in exile can become an attractive third option to two parties married to the ideological relics of the 20th century.

Even if it succeeds in November, Trump’s brand of revanchism, protectionism, and cultural resentment will fail on its own terms. It always has. These younger conservatives can serve as the vanguard of a movement that restores the GOP’s conservative foundations, or perhaps even build something entirely new. All they lack is a leader. 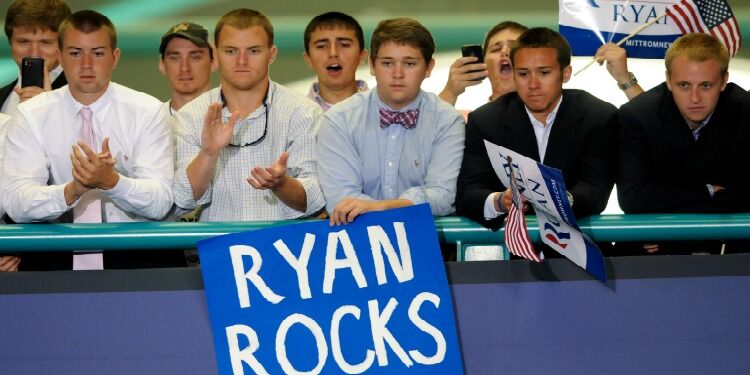 GOP Debate Was Civil and Informative

Rubio and the Modernization of the GOP