The question of not only when but how to restore something resembling a functional society looms large. When will individual states and municipalities reach the point at which their “curve” has flattened to the point that overwhelming hospitals is unlikely? Can we create a testing regimen that suffices for population-wide monitoring of infection rates? Is it possible to compose a contact-tracing system that is both effective and conforms with legal privacy protections? And if we cannot, and the crisis fails to compel compliance with voluntary distancing and isolation guidelines, at what point does the enforcement authority of states, cities, and towns erode?

These questions are not particularly welcome among those for whom public health is a matter of the body, not the mind. No matter who it irritates, it is nevertheless the fact that the public officials who are endowed with the legal power to impose stringent measures on their citizens remain responsible to those citizens. The powers they wield are derived from the public’s consent. It’s hard to avoid the impression that even acknowledging the legitimate philosophical tensions between the preservation of public health amid a pandemic and the demands of a free society seems beneath the expert classes.

“There’s a lot of deliberate misinformation and fear-mongering that’s plagued our response,” an aggravated former FDA Commissioner Scott Gottlieb wrote on Tuesday. In the absence of a robust testing and contact-monitoring regime backed by technologies like cellphone tracking programs, he observed, “we’ll almost certainly have large outbreaks and maybe another epidemic.” To avoid this terrible circumstance, he recommends testing all Americans who visit a doctor’s office, the forcible isolation of the infected, and contact-tracing software akin to what South Korea has deployed. As Bloomberg’s Eli Lake outlined, though, the Pacific Rim governments that most effectively contained their outbreaks are not bound by the kinds of privacy protections to which Americans are accustomed.

The Republic of Korea, for example, tracks the movements of infected people and alerts those within their general vicinity to their potential contamination. Seoul has utilized mobile-phone data as well as CCTV footage and banking records to effectively trace potential contacts and contain hot spots before they bloom into something less manageable. As Lake notes, the data required to duplicate this regime in the United States is spread out across multiple private firms. Civil libertarians warn that the public use of this information would have to be accompanied by legal protections, independent oversight, and reauthorization clauses that cannot be buried within unrelated legislation. If the American experience after 9/11 is any indication, this is a wish list that is unlikely to be fulfilled.

Moreover, the risk that such stringent measures could quickly become counterproductive is almost never entertained by those for whom the exigency of the current crisis is paramount. Even with some of the hefty fines associated with the violation of HIPAA guidelines waived, medical providers can be excused if they’re cautious about what patient data they’re willing to share. “Part of the privacy concern is that people could face discrimination, isolation, even retribution if their identity were revealed,” read one dissenting dispatch on the subject. “Plus, it makes it less likely that those who are infected or suspect they are will come forward for testing.”

Public officials are also toying with the prospect of establishing something like a database of Americans who have contracted the disease and developed an immunity to it, allowing them to reenter society while at-risk groups remain in relative isolation. “I think this is part of the solution,” said Sen. Bill Cassidy, who is lobbying for the development of immunity registries. The daunting technical hurdles aside, it should also be intuitive that creating economic rewards enjoyed only by those who contract this virus would yield incentives to become infected. That’s unthinkable only to those who have the comfort of being able to ride out this storm from the comfort of their home office. For millions of Americans who are desperate to engage in whatever economic activity they can find, the rewards could well outweigh the risks.

There may simply be no alternative to such drastic measures, but it does no service to the debate over the issue to pretend as though monitoring of U.S. citizens who were not convicted of a serious crime is not a radical alteration of the American social compact. Nor is it helpful to suggest that those who foresee such a program having profound and permanent consequences are not acting in good faith. Dismissing these valid concerns as the product of ignorance alone is a recipe for less compliance with the recommendations of public-health experts.

These concerns are of little note in the aeries of academia. Sure, some folks are worried about temporary restrictions placed on constitutional freedoms like assembly and association, Harvard Law Professor Charles Fried recognized. But, so what? “None of these liberties is absolute,” he noted, “they can all be abrogated for compelling grounds. And in this case, the compelling ground is the public health emergency.” As for those who’ve been put out of business by public mandates, tough luck. “The government didn’t put you out of business; circumstances did,” he averred. “And it’s not a permanent deprivation if you go out of business.” And woe be unto those who use their freedom of expression to disseminate false or simply arguable information amid this crisis. “To me, the liberties of getting where you want to go are less concerning than the potential for disinformation and rumor-mongering,” Fried added.

When asked on Monday what a post-pandemic “normal” would look like for most Americans and when it might return, U.S. health adviser Dr. Anthony Fauci had some grim news. Eventually, America would once again “function as a society,” he said. “But you’re absolutely right, if you want to get to pre-coronavirus, that might not ever happen in the sense that the threat is there.” If the objective of public policy today is to ensure that the public follows distancing guidance for as long as possible, it is hard to imagine a less productive way to induce widespread conformity. People are supremely adaptable. It’s one of our most valuable evolutionary traits. If this is the “new normal” until a vaccine is widely available, it’s wise to expect people to treat it as normal and to assemble as much normalcy around them as they can. Nothing will erode the sense of urgency around this crisis faster than creating the impression that it is not a crisis at all, but just the way things are now.

It’s not those who acknowledge the imperfectability of human nature who are undermining the national response to a public health crisis. It’s those who imagine this fact of life isn’t an obstacle at all but a figment of our collective imaginations that can be regulated or simply argued out of existence. Managing a public health crisis would be a lot easier if it didn’t involve so many flawed and fallible people. But nothing is perfect. 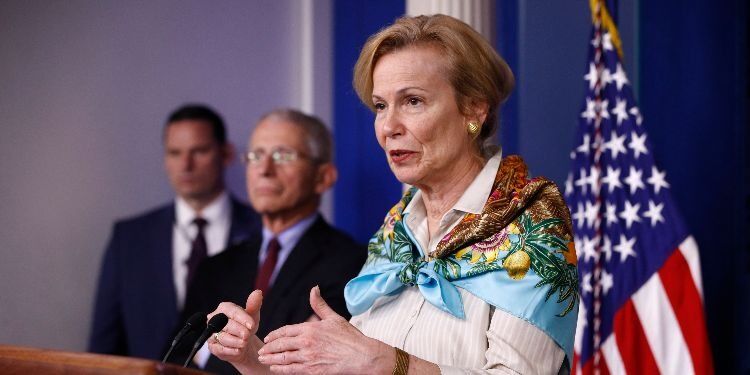