The passions that erupted after George Floyd’s killing have migrated from American streets into American institutions. Congress is now deliberating over what policing reform should look like. And while the federal legislature is constrained by the authority that states and municipalities have over their respective police forces, there was hope that some circumspect reforms may pass through this divided body. But the seemingly transcendent spirit of the moment has not transcended politics. And it is the pursuit of politics that has exposed the hollowness of this moment of national reckoning with racial disparities in law enforcement.

South Carolina Sen. Tim Scott has led the Senate GOP’s efforts to shepherd a bill addressing police practices. It was, the New York Times declared, a departure for the African-American senator who was “once quiet on matters of race.” Of course, that Times dispatch also noted that this supposedly shy senator has for years discussed his own experiences being profiled by law enforcement, has counseled the president on racial issues, and was instrumental to passing the First Step Act, a package of criminal-justice reforms signed into law in 2018.

Nor is Scott particularly timid about advocating police reforms. For example, he led the effort to introduce an amendment to the First Step Act—the Walter Scott Notification Act, named after an unarmed black man who was killed in 2015 while running from police—which would have compelled states to report data surrounding arrest-related shootings by police.

Scott reintroduced the provision this month, with Republican support. But Scott’s initiatives didn’t end there. His bill would leverage federal funds to force police departments to effectively end controversial practices like chokeholds, increase the use of body cameras, augment training in de-escalation tactics, make lynching a federal hate crime, and establish a commission to study the prohibition of “no-knock warrants” in drug cases.

The bill does not go as far as what House Democrats have proposed, of course, but it was surely a good-faith display of seriousness in pursuit of incremental reforms. To hear Democrats tell it, the bill wasn’t just unacceptable—it was an insult, unworthy even of discussion.

The bill was mere “lip service” with “nothing substantial in it,” declared Sen. Kamala Harris. The measure would “guarantee that the cycle of violence” and the “abuse of civil rights” would continue, Sen. Cory Booker agreed. “Let’s not do something that is a token, half-hearted approach,” Sen. Dick Durbin averred.

Amid this scene-chewing high dudgeon, the South Carolina senator took to the Senate floor and was overcome with emotion. Choking back tears in his June 17 speech—the 5-year anniversary of a massacre of black churchgoers in Charleston—Scott declined to stoically endure his abuse. “To think that, on this day, as we try to make sure that fewer people lose confidence in this nation, to have the senator from Illinois refer to this process,” he said, “to call this a ‘token’ process hurts my soul.” Durbin later apologized for his remarks, which were racially charged but contextually explicable. He was not trying to attack Scott but make a political point about this legislation, and Americans who maintain some capacity for charity should be able to recognize the difference. But Scott’s mistreatment did not end there.

“They admit that and have some suggestions that are worthy of consideration,” confessed Speaker Nancy Pelosi, “but so far, they were trying to get away with murder, actually—the murder of George Floyd.” Republicans were particularly incensed by this demagoguery, and they demanded an apology. “Will you apologize,” NBC News reporter Peter Alexander asked the speaker. “Absolutely, positively not,” she replied. When pressed to say whether she believed Sen. Scott was acting in “good faith,” the speaker laughed—as one does when accusing someone of “murder”—and insisted that she wasn’t talking about the author of the bill she was lambasting but the senate majority leader. Of course.

Despite two Democratic defections on Wednesday, Senate Democrats blocked a measure to even open debate on Scott’s bill or to allow amendments to it—amendments Scott repeatedly claimed were welcome and discussed in private consultations with Democrats. It is important to emphasize Democratic objections here. This was not merely a quibble over the scope of the legislation—a mundane objection that will lead Senate Republicans to reject the police-reform bill House Democrats are crafting. The Democratic contention here is that Republicans prefer the status quo. Scott was having none of it.

“The actual problem is not what is being offered,” a visibly frustrated Scott asserted in the wake of the failed cloture vote. “It is who is offering it.”

“I have dealt with the problem of ‘who’ before,” Scott continued. “As a black man, I get the ‘who’ being the problem.” This is a serious accusation, one that shouldn’t be left to innuendo alone. The senator is contending that the problem Democrats have with this bill isn’t the legislation itself as much as the black Republican who is championing it. That’s a scandalous charge, but such claims of conscious discrimination aren’t beyond the realm of polite discussion. We are privy to such allegations on a near-daily basis, and with less substantive evidence in support of them. Why shouldn’t Democrats be compelled to take this accusation seriously? 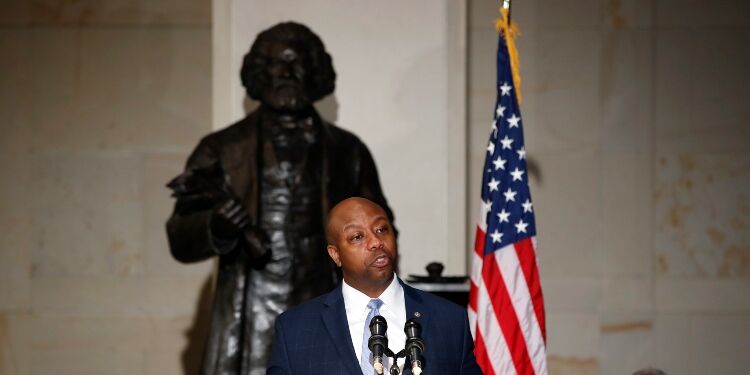