Twenty-seventeen has provided the pro-Trump right with a reliable source of satisfaction in the form of conservative Trump critics prostrating themselves. When it comes to foreign affairs, the so-called “Never Trump” right has had to admit that the president and his administration are, for the most, part getting the policy right. What the pro-Trump phalanx has had a tough time coming to terms with, though, is the extent to which the president has adopted his conservative critics’ policy prescriptions, not the other way around.

On Monday, President Trump released a national-security strategy review which, coinciding with a speech on the subject, that supposedly refocuses America’s foreign-affairs priorities and reorients U.S. grand strategy toward promoting “America First.” A peek under the hood reveals, however, that Trump’s new national-security strategy is a relatively conventional Republican approach to foreign affairs.

Superficially, this white paper reads like standard #MAGA fare. Indeed, when Trump delivered an address on Monday focused on his foreign-policy priorities, it could have been mistaken for a slightly downbeat stump speech from the 2016 campaign trail. But the policy is far from boilerplate Trumpism. The various invocations of “America First” in this document appear designed only to misdirect the isolationist wing of the GOP so they don’t recognize that they’ve been baited-and-switched.

This study demonstrated that the administration views the world as an anarchic environment in which great powers and non-state actors are engaged in a competitive, although not necessarily reflexively adversarial, contest. It identified America’s main threats as coming from three distinct sources: “strategic competitors” such as China and Russia, “Rogue states” such as North Korea and Iran, and transnational terrorist organizations. It emphasizes the need for “fair and reciprocal” relationships abroad, such as multilateral trade organizations and military alliances.

The document referred to both China and Russia as “revisionist” powers, which they are; both Russia and China are expansionist nations that have invaded, annexed, or created from scratch new territory beyond their borders. It rejects the notion that rogue states can be transformed into productive members of the international community through diplomatic negotiations. Border security begins with defending against terrorist operations and the infiltration of weapons of mass destruction into the United States, followed closely by the need to create a reliable network of anti-ballistic missile interceptors along the coasts.

Despite Trump’s talk of retrenching behind the walls of Fortress America, this national-security strategy recommends taking action “against sanctuaries” for terrorists abroad “before they can threaten the U.S. homeland.” This document rejects the idea that American values or its “way of life” can be “imposed” on others, which has been widely interpreted as the codification of Trump’s campaign-trail antipathy toward “democracy promotion.” But this document criticizes both Russia and China for making their economies “less free and less fair” and for censoring information “to repress their societies.” It also notes that “rival actors use propaganda and other means to discredit democracy.” It sounds from this like the U.S. has an interest in opposing the anti-democratic actions of these authoritarian states by, you know, promoting democracy. Eventually, this document gets around to endorsing that notion when it declares that “America’s commitment to liberty, democracy, and the rule of law” is an “inspiration for those living under tyranny” and is, thus, an indispensable tool of statecraft.

Trump is fond of denigrating foreign trade blocs and he has accused NAFTA of representing a national-security threat, but there is no mention of NAFTA in this document. It recommends only reforming organizations like the World Trade Organization to make it “a more effective forum to adjudicate unfair trade practices” and suggests the International Monetary Fund and the World Bank should “encourage multilateral development banks” to invest in infrastructure abroad. That last bit was lifted off a World Bank press release announcing that this policy was already in place. So much for “the false song of globalism.”

Both Trump and the document on which he was ostensibly elaborating emphasized the need for America’s allies to “shoulder a fair share of the burden” for maintaining the geopolitical order, likely an uncharacteristically veiled reference to Trump’s demand that NATO’s allies invest more in their militaries. On the campaign trail, Trump scoffed at the fact that just five of NATO’s 28 members spent the requisite equivalent of two percent of their GDPs on defense. At a NATO summit in May, he went so far as to suggest that the U.S. would not respond if the alliance’s mutual defense provision was invoked by a member state that wasn’t carrying its weight.

Trump always misunderstood the impetus for defense spending in the first place, and his address and white paper dropped the specifics from their complaint. The nations that met that threshold in 2015—the U.S, U.K., Estonia, Greece, and Poland—all did so in response to external threats. Defense spending among NATO members is on the rise today, with Romania, Latvia, and Lithuania all set to meet that 2 percent threshold. They are not making these investments in response to Trump’s hectoring but to the threat posed by Russia—a threat that Trump appears to have finally recognized, along with the value of the Atlantic Alliance.

In an April 2016 speech on the campaign trail, Trump insisted that there was a method behind his conscious kowtowing to Moscow. He insisted that Russia and the U.S. could cooperate to beat back the threat posed by Islamist terrorism. Indeed, on Monday Trump revealed that the CIA had worked with the Kremlin to prevent an imminent terror attack from taking place. But the cooperative relationship Trump envisioned will remain the impossible dream. In 2017, Trump became the third consecutive president to pursue a “reset with Russia” without understanding the nature and sources of Russo-American conflict. They’ve sought to convince the Kremlin to abandon its Iranian allies and, therefore, the objective of reestablishing Moscow as a geopolitical pole on par with Washington. It was a project doomed to fail, and the West is fortunate that it ended before one or both players in this game miscalculated their way into a crisis.

When it comes to foreign affairs, the Trump-skeptical right’s trepidation was founded on its rational assessment of what the former reality-television host said he would do when he became president. Now that the facts have changed and Trump has largely abandoned in all but name his vision for an “America First” foreign policy, his rational critics’ positions have changed, too. Trump’s unfailingly sycophantic boosters would be well served by similarly letting the facts shape opinions; not the other way around. 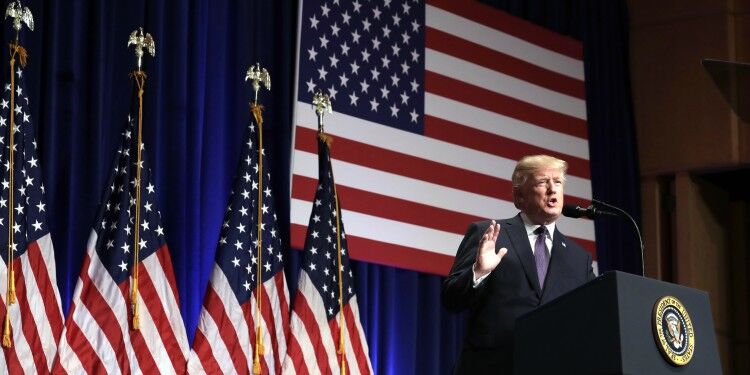 Evidently, This Is Not a Joke

“Punished for Protesting” in Venezuela

Should Venezuela Be on the List of Terror Sponsors?