The 1998 film Deep Impact provides us with the Hollywood ideal of how Americans would respond to a potentially transformative crisis. In the movie, the discovery of a comet on a collision course with Earth focuses everyone’s attention on the threat. All the piddling affairs that once preoccupied the protagonists’ minds melt away. At once, the globe unites to mount a vast, collaborative campaign to avert this potentially existential disaster. Only when those efforts fail do the heroes of this story resign themselves to the worst case scenario. Hollywood’s ideal is garbage.

In reality, the crisis we can all see coming from years away is a crisis for another day. We have a real-world example of this in the form of the looming catastrophe involving America’s entitlement burden. The day of judgment fast approaches, but most Americans—even those who profess to care deeply about the prospect of insolvency and the hardships that will accompany it—are content to look the other way.

On Tuesday, Medicare’s Boards of Trustees issued a report warning that the program is now projected to reach insolvency in 2026—three years ahead of schedule. The nation’s second-largest insurance program, with more than 58 million beneficiaries, will be unable to finance benefits for Part A hospital insurance recipients, which accounted for 40 percent of Medicare beneficiaries in 2017. In the absence of “additional legislation” that would extend the program’s lifespan, mandatory cuts to scheduled benefits are unavoidable.

Social Security, too, is headed for an iceberg. That program’s trust fund is scheduled to be fully exhausted in 2034 unless Social Security’s retirement and disability funds are combined into a single program. That, too, would require Congressional action. This year, for the first time and three years earlier than expected, Social Security’s costs will exceed its income. The program on which 61.5 million people rely for some part of their income will have to dip into its trust fund to maintain its current scheduled benefits.

This is the Earthbound comet we’ve been expecting. And yet, the sobriety and resolve that accompanies a crisis in the screenwriter’s imagination have failed to materialize. Instead, we’ve been privy to a familiar round of partisan recriminations.

Writing in the Los Angeles Times, Michael Hiltzik thought this report was a perfect opportunity to castigate the legacy press for not taking the opportunity presented by the imminent insolvency of America’s entitlement programs to scold Republicans to his satisfaction. “[T]he truth is that the Republicans are doing their best to cut the legs out from under both,” he wrote. And yet, despite any acknowledgment of the contradictions, Hiltzik went on to insist that not only are Medicare and Social Security mostly stable with secure finances, they can also afford to be expanded. The $2.9 trillion needed to redeem Social Security Treasury bonds in the next 16 years will come from somewhere. Right?

Republicans, meanwhile, seem properly chastened by the fact that they have spent the last several decades warning of this crisis, but, now that they have full control of every branch of the federal government, have done little to address it. The White House is alternating between claiming that radical economic growth (which we have yet to see materialize) will resolve the crisis before it arrives and hectoring Congress to embrace some of the programs in President Donald Trump’s budget designed to modestly extend the lifespan of some of the most imperiled entitlement programs.

And yet, despite the best efforts of America’s political class to pawn the coming crisis off on the other guy, the comet continues on its fateful course. Republicans are apt to allow their prohibitive grip on government slip away without addressing the very budgetary imbalance that mobilized a winning coalition for them in 2009 and 2010. Democrats, seemingly incapable of saying no to their base of wildly unrealistic progressive idealists, remain committed to increasing the number of beneficiaries to these beleaguered programs.

Yet, those who expect America to escape the political dysfunction that accompanies a debt crisis may be sadly mistaken. In the next decade—likely in the next president’s first term—the debt is expected to exceed 100 percent of GDP, and the non-discretionary spending that devours the majority of America’s annual budgetary outlays will become nearly unserviceable. At some point in the interim, the business cycle will return and the economy will contract. Then, America’s policymakers will wish they had enacted reforms during this time of plenty, when the economy and voters could absorb the blow. When faced with the choice between substantial tax increases or painful cuts in benefits, the electorate is going to be in the mood to punish Washington. And, in the end, the voters always get what they want. 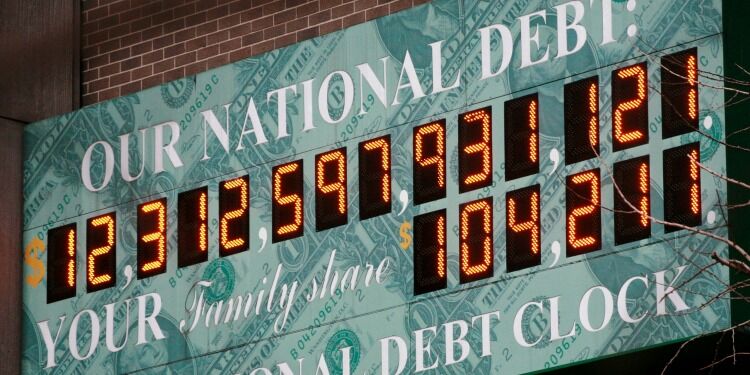