This week, former Colorado Governor John Hickenlooper joined a sprawling field of Democrats seeking their party’s presidential nomination, but he may soon find that the party he calls home has left him behind amid its full-tilt sprint to the left.

Hickenlooper was among the Democratic Party’s foremost advocates for the revolutionary technological innovations that will transform the United States into a net energy exporter in 2020. Chief among those, the technique of hydraulic fracturing, which has made cleaner-burning natural gas ubiquitous and rendered coal-burning power generation inefficient and cost prohibitive. Hickenlooper was such an advocate for the practice, in fact, that he testified before the U.S. Senate that he actually drank fracking fluid to prove it was harmless.

Hickenlooper’s advocacy was only prudent. Colorado is providentially positioned atop the third-largest reserves of natural gas in the country. Since 2001, technological advancements have transformed Colorado into the fifth-largest natural gas producer and seventh-largest oil producer in the nation—doubling output and creating more than 232,000 new jobs in the process. In another era—the antediluvian beforetime of 2014—many Centennial State Democrats thought this was something to celebrate. For today’s Democrats, however, it’s a problem to solve.

In 2018, Democrats took control of both chambers of the legislature and retained the governor’s mansion, and among their first acts is to abandon Hickenlooper’s policy of defending fracking from local municipalities that sought to strangle the industry. Colorado Democrats have proposed legislation that would give cities and counties more influence over regulating the energy industry, allowing individual municipalities the power to inspect facilities and impose fines. It would also require that a majority of mineral rights holders consent before any one firm can tap into a shared pool of oil and gas reserves, making those reserves harder to access.

The patchwork of regulations this bill would yield would make compliance a Byzantine prospect, but that isn’t even the legislation’s most pernicious effects. Arguably the bill’s true aim is to transform the powerful Colorado Oil and Gas Conservation Commission (COGCC) from a body that fosters the responsible development of fossil fuels into one that curtails it.

Currently, the commission is composed by law of seven appointed members, three of which are required to have “substantial experience in the oil and gas industry.” A fourth member of the commission is supposed to be a member of the mineral-rights community who generates income from oil and gas exploration and production. Under this bill, the commission would have only one person with such experience, replacing the other two with experts on environmental conservation and public health. It would also eliminate the requirement that an individual with existing ties to the oil and gas industry must be represented on the council.

This would represent a full-scale reversal of the state’s efforts to restructure itself to take maximum advantage of the innovations that had rendered the formerly vogue notion of “peak oil” obsolete. The last time the COGCC was restructured in 2007, it was with the aim of making the state friendlier to energy exploration and exploitation. Dozens of outdated regulations were updated or dispensed with, and the results have been a boon to both Colorado’s economy and the nation as a whole.

It’s hard to avoid concluding that Colorado’s Democratic lawmakers are a little self-conscious about their proposal. The text of the bill went live online at 5 p.m. on Friday, and a state Senate hearing on the measure is expected to take place on Tuesday, leading industry groups to protest that there simply has not been enough time to examine the proposal or to send representatives to the legislature equipped to argue against it.

On a national level, Hickenlooper’s party seems similarly predisposed to leave him behind. The Democratic Party’s 2016 platform backs closing the regulatory gap that Hickenlooper supported as governor, which allows states, not the federal government, to regulate fracking. Notably, Democrats call it the “Haliburton loophole,” not the Hickenlooper loophole. The Democratic platform insists that the objective is only to ensure that local water supplies are not contaminated as a result of the practice, but study after study conducted by both the Environmental Protection Agency and local universities have repeatedly found that hydraulic fracturing does not cause systemic harm to underground water supplies. Colorado Democrats have given up the game. The objective isn’t to make cleaner-burning natural gas exploration safe and efficient—it’s to make it less profitable.

Natural gas has been described as a “bridge fuel”—a cleaner burning fossil fuel that can help transition an evolving energy economy away from dirtier fuels and toward renewable sources that are technologically incapable of satisfying present consumer and industrial demands. Democrats apparently want to burn the bridge even before they’ve crossed it. 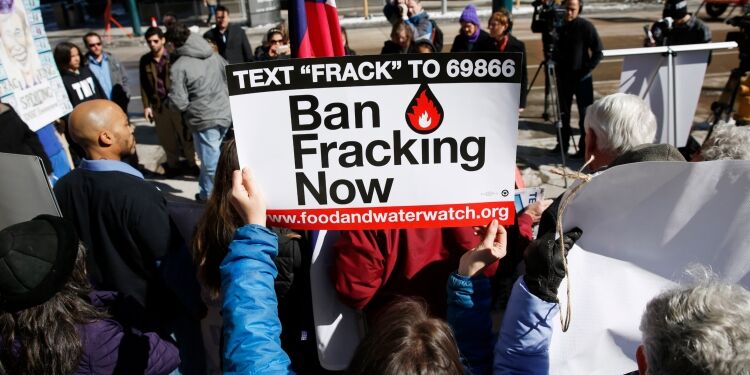