President Barack Obama and his administration are doing his chosen successor no favors.

In a week in which matters related to national security took center stage, the president and his allies played directly into the hands of the Republican Party and their presumptive presidential nominee, Donald Trump. Yet Clinton’s political position has not deteriorated appreciably, if at all. If a competent Republican presidential campaign was inclined to tie her to the administration’s failures, Clinton might find herself in real trouble.

The president’s awful week began with a remarkably petulant response to the worst terrorist event on U.S. soil since September 11, 2001, in which he went on what CNN described as a “tirade” against Donald Trump. In stark contrast to Obama’s Oval Office address in December of last year—a speech in which the president projected a sense of resolve to defeat the organization that inspired the San Bernardino attackers—the president’s irritation was reserved solely for the presumptive GOP nominee.

Less than a week later, Obama’s Justice Department added to the impression that the administration appears to view average Americans as a greater source of consternation than radical Islamist terrorists. In a bizarre move, the FBI expunged from the record all references to the Islamic State in the Orlando shooter’s pre-attack 911 calls. Not to remove those references, Attorney General Loretta Lynch insisted, would only “further his propaganda.”

Unfortunately for the Justice Department, the redacted transcripts left nothing to the imagination. Simply superimposing “[omitted”] over terms like “the Islamic State” and “Abu Bakar al-Baghdadi” did not trick readers into forgetting the virulent, terrorism-exporting caliphate exists. After a few hours of withering scorn and mockery, the Justice Department released a full, unedited transcript. After reversing course, a DOJ statement contradicted Lynch and insisted that the department’s only interest was in observing sensitivity toward the still-grieving family members of this attack’s victims. The remarkable incompetence displayed by law enforcement in this episode did little to advance the party of government’s electoral prospects.

The president, who has insisted that he has no higher priority than avoiding the commitment of Americans to another foreign war, is not only watching Americans get killed at home but abroad, too. On Monday, the Pentagon announced that four U.S. soldiers operating in an advisory capacity in Syria were wounded on June 9 when an anti-tank round fired at them by suspected ISIS militants exploded. This marks the fifth instance that U.S. servicemen and women have been killed or wounded on the battlefield since the White House reluctantly committed to the anti-ISIS campaign in Iraq and Syria.

Even Obama’s central foreign policy legacy achievement—the nuclear deal with Iran—is coming apart. A just-completed analysis of one of the last IAEA inspections of an Iranian nuclear site confirmed that, contrary to the pronouncements of Islamic Republic apologists, Iran’s nuclear program was military in nature. What’s more, while American officials believe the program was put on hold in 2003, the finding underscores the likelihood that Iran can crash its way to a bomb at a time of its choosing.

In vying for a third consecutive Democratic term in the White House, and as a former administration official, Hillary Clinton should be made to answer for all of this.

Clinton tripped over herself in the effort to avoid saying “radical Islam” in a competitive Democratic primary only to reverse herself in the general election. In doing so, she confirmed that this is a bizarre Democratic hang-up and that partisan politics are now tainting how the FBI comports itself. Clinton presided over the inauguration of the Syrian civil war and the gross violation of international norms represented by the Assad regime’s battlefield use of chemical weapons. She wants credit for advising the president to engage more actively in the effort to contain the bloodletting in Syria, but Clinton served her entire term and without any notable pangs of conscience. Though she has distanced herself from the president on a variety of issues related to foreign affairs, Clinton has repeatedly gone out of her way to praise and defend the deal that she still insists will prevent Iran from going nuclear.

Clinton escapes censure for these and other issues, and that is entirely the fault of Republicans for lacking the message discipline to force Clinton out of her bunker. While ceding the earned media landscape to Donald Trump, Clinton has been able to deliver set-piece speeches and provide interviews to handpicked media personalities. Rather than focus on his opponent, Trump has reportedly decided to distract the public from his hemorrhaging institutional support and intramural feuding by feeding the press stories about the drama within his chaotic campaign.

If Republicans had a competent candidate around whom they could unite, Hillary Clinton’s campaign would be scrambling. For the moment, the Republican Party is Clinton’s most invaluable asset. 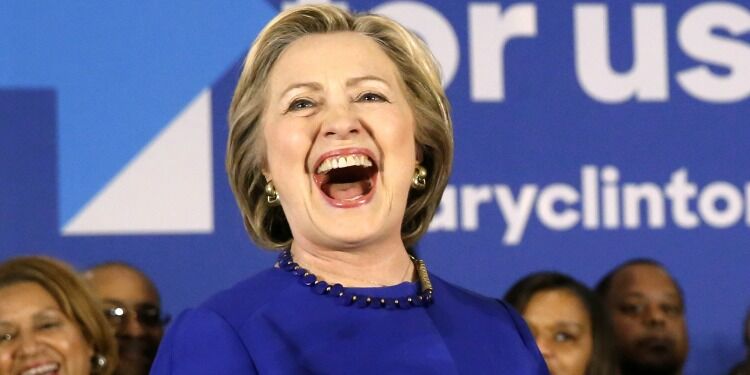