Republicans are racist. That’s been the predictable smear the left has hurled at the GOP for decades. It was always ever groundless and cynical. Under Donald Trump, however, the GOP is living down to its worst stereotypes. In the mission to support their toxic candidate, the Republican Party itself is flirting with white supremacists and inviting a once-in-a-generation catastrophe in the process.

Donald Trump cannot seem to convince white supremacists—a toxic bunch that has somehow managed to convince the nation’s opinion-makers to refer to them as “white nationalists”—that he doesn’t want their support. “This publication is repulsive, and their views do not represent the tens of millions of Americans who are uniting behind our campaign,” read a Trump campaign statement rejecting the endorsement of the KKK-affiliated publication, The Crusader. White supremacy groups are undaunted by the candidate’s coy dismissals. They hear what he’s saying, and they like it.

“He’s talking about it in a visceral way,” former Klan leader David Duke told the Los Angeles Times, saying that Trump’s support for a Muslim ban and a border wall was a white supremacist message. “Donald Trump is talking implicitly. I’m talking explicitly.” It was Trump’s success that supposedly convinced Duke to run again for public office—the U.S. Senate from the state of Louisiana, specifically. The perception that the white nationalism message resonates with voters today in a way that it hasn’t has led a host of unsavory characters to brave the light of day.

Duke’s supporters, as well as members of the Klan and the American National Socialist movement (yes, actual Nazis) have pledged to do their best to prevent what Donald Trump has said will be a “rigged election.” According to Politico, they plan to gather at polling places in mostly minority communities to “watch” for irregularities. Who wants to bet that any of these groups have registered with their local communities to perform this activity?

In the past, any support Republicans received from these distasteful groups was tangential, unwanted, and deniable. Now, under Trump, the GOP and the white nationalist right are increasingly linked. The Republican National Committee is forbidden by a 1982 consent decree to engage in any poll watching in minority districts. The GOP nominee’s repeated requests for his supporters to keep tabs on minority districts has led to a Democratic court challenge, in which the RNC has been compelled to surrender any written or verbal agreements related to poll watching or monitoring. “Even without the RNC’s alleged coordination, the Trump campaign is hiring its own poll watchers to challenge what it says is widespread voter fraud,” Bloomberg reported. “Neither the campaign nor the Republican state parties are barred from such activities.” What an invaluable gift this is to the Democratic Party.

Early in the election cycle, Republican nominee clearly welcomed the burst of online enthusiasm their candidate received from the loose amalgam of tech-savvy white supremacists calling themselves the “alt-right.” Before joining on to chair Trump’s campaign, Steve Bannon’s website Breitbart made explicit efforts to cater to this group. The alt-right’s most potent voices have now taken the reins of the Republican political machine. The lines between white nationalism and the GOP’s sanctioned spokespeople are becoming blurred beyond recognition.

The evidence that Trump supporters are spooked by independent candidate Evan McMullin’s bid to steal Utah’s six Electoral College votes arrived this week in the form of a robo-call recorded by self-described white nationalist William Johnson. The call alleged that McMullin is gay because he is unmarried and attacked his mother for having divorced his father only to later marry a woman. “The call was disgusting. It’s reprehensible, and it was appropriately denounced by the campaign,” insisted Republican National Committee Chief Strategist Sean Spicer, before blowing it. “But for him to then turn it back on them is almost as reprehensible.” By “them,” he meant self-identified racists.

“We live in a country of over 300-plus million people,” Spicer continued. “Not everybody who supports Donald Trump–not everyone who supports Hilary Clinton–are exactly the kind of people that you want as supporters.” For an RNC spokesperson to contend that his party welcomes the support of white supremacists is the kind of craven desperation from which the GOP may never entirely dig itself out.

It’s a miracle that the broader electorate continues to see the Republican Party as distinct from Donald Trump, but that’s not a phenomenon the GOP can take for granted. If Donald Trump, out of pure opportunism, manages to tar his adopted party with the stain of white nationalism, he will have well and truly destroyed its electoral viability. The Republican Party needs to confront its emerging white supremacy problem, and it needs to do it now. 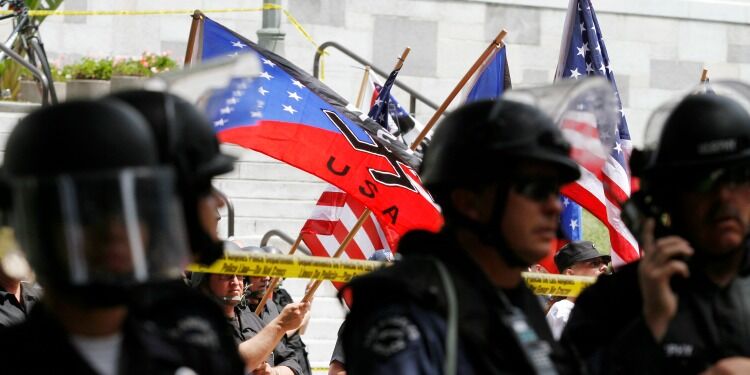