To hear left-of-center opinion-makers tell it, the model of good governance in the pandemic has been set by New York Gov. Andrew Cuomo.

The Empire State governor regularly ranks at the top of lists—a journalistic convention that translates subjective insights into something more authoritative—of executives managing the plague and its fallout. Cuomo’s daily performance before the cameras has been so well-received that it’s contributed to speculation about the governor (somehow) replacing Joe Biden at the top of the Democrats’ presidential ticket in November. After all, “he’s doing what any president should do,” actor Robert de Niro told The Late Show host Stephen Colbert.

The outpouring of affection has culminated in some rather nauseating discussions of the governor’s romantic availability. He’s been the subject of fawning music videos. He’s adorned the cover of Rolling Stone magazine. And if you’re the cloying sort, you can even purchase “crushing on Cuomo” merchandise including, but not limited to, socks adorned with the governor’s face and coffee mugs captioned “Future Mrs. Cuomo.”

The cult of personality that’s sprung up around New York’s irascible governor is partly attributable to the trauma New Yorkers have endured. Cuomo presides over one of the nation’s hardest-hit states, and his affect has been sober enough to convey a sense of authority. But in terms of performance, the outcomes this governor has overseen are so terrible and contrast so starkly with the adulation he’s received that it’s impossible to see this phenomenon as something other than a contrivance.

The governor has somehow been spared an aggressive effort by the journalistic establishment to relitigate the month of February. What was the president doing at the time to mitigate the terrible effects the pandemic would have on American society in March? If the question was asked of the governor, the answer would be, what everyone else was doing: downplaying the pandemic. “We went through this before: Zika virus, Ebola, et cetera,” Cuomo said on February 7. “But let’s have some connection to the reality of the situation,” he continued, “catching the flu right now is a much greater risk than anything that has anything to do with coronavirus.”

By late March, with the scale of the disaster now acutely felt, the governor lashed out at President Donald Trump for suggesting that he did not believe New York would require “40,000 or 30,000 ventilators.” Cuomo called the president’s suggestion “ignorant” and “grossly uninformed,” insisting that the 4,400 ventilators the state had received from the federal government would prove disastrously inadequate. But it turned out that ventilators were of less utility for treating advanced COVID-19 cases than medical professionals initially believed, and the state’s peak caseload came earlier and with fewer overall infections than anticipated. In the end, if the president had caved to the media-driven pressure to transfer nearly all its ventilator reserve to New York, they’d have gone largely unused, and the rest of the country would have been in a precarious position as a result.

In a “historic move” on April 30, Cuomo announced that the New York City subway system would temporarily cease 24-hour operations so that cars could be disinfected. The governor himself made a conspicuous trip to New York City’s unfortunately named Corona Maintenance Facility for a tour and a photo-op. This was an important directive, but one that likely came months too late.

On April 13, a working paper published by an economist with the Massachusetts Institute of Technology indicated that, by early March, the subways were a “major disseminator” of coronavirus. According to new research, New York City’s outbreak had become so bad that, by late March, the city was responsible for seeding much of the country with this virus. Even if those connections are speculative, the death toll among MTA workers is hard to ignore. By April 22, 83 transit workers had died as a result of complications from COVID-19 infections. For this tragedy, MTA chief Patrick Foye blamed “the CDC and the World Health Organization” for falling to prepare them for the scale of this disaster.

“All nursing home staff must now be tested for COVID twice a week,” Cuomo tweeted on Monday. “This rule is not optional — it’s mandatory.” The governor assumed this authoritative and overdue position amid a nightmarish death toll in Mid-Atlantic homes for the aged. Over 5,300 residents of nursing homes have died from this virus, but this death toll was no doubt exacerbated by the governor’s March 25 directive that forced senior-care facilities to accept new admissions even if they come from hospitals and could be infected themselves. Even as the governor described his state’s nursing homes as a “feeding frenzy for this virus,” the directive remained in place. Only on Sunday did Cuomo rescind the order.

Even a cursory review of Andrew Cuomo’s record during this event should disqualify him from the excessive adulation he’s received. Whatever it is that’s generating the sycophancy Cuomo has enjoyed, it is not his performance. Click to Tweet

Tens of thousands have died in New York state as a result of this pandemic, but the real human cost of this disease may be far greater than that. “Excess deaths” that are not directly attributable to this infection—failing to seek care for chronic conditions, for example—will likely balloon the total Coronavirus death toll. One study suggested that this is the terrible byproduct of “the demand on hospitals and health care providers and public fear related to COVID-19,” but the governor directly contributed to that fear and the subsequent avoidance of emergency care. “If you’re feeling sick, use #Telehealth services *before* going to the doctor’s office, Urgent Care, or the ER,” the governor wrote on March 16. “It keeps you safer, and it keeps those around you safer.”

No elected official got this pandemic entirely “right.” States like Ohio, which had one of the most aggressive and preventative early responses to this outbreak, are seeing cases increase. Meanwhile, states like Georgia and Florida, which were ruthlessly attacked for relaxing restrictions too soon, have seen their caseloads stabilize or decline. There’s a lot we still don’t know about this virus, and it is incumbent on observers to forgive some of the mistakes that are being made along the way. But even a cursory review of Andrew Cuomo’s record during this event should disqualify him from the excessive adulation he’s received. Whatever it is that’s generating the sycophancy Cuomo has enjoyed, it is not his performance. 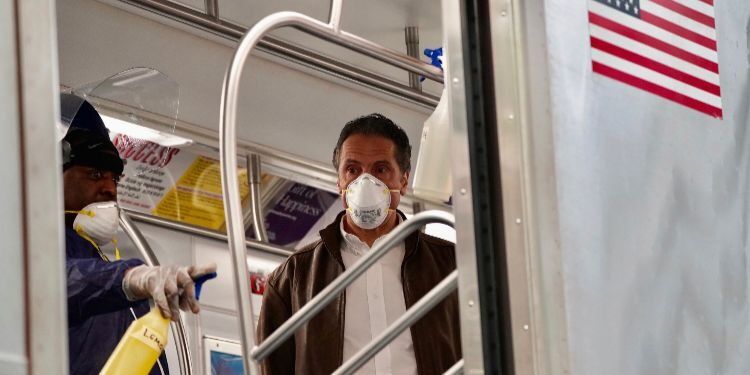