It was only a few weeks ago that the Republican Party appeared destined to suffer a contentious and unsightly contested nominating convention. Those Republicans who concerned themselves with such things like winning the White House in November feared that even if such a spectacle resulted in the nomination of an electable figure, the affair in Cleveland would doom the party’s prospects. The threats of chaos on the convention floor and the possibility of violence in the streets, as Trump’s allies warned would follow the frustration of the celebrity candidate’s will, loomed large in the minds of longtime party members. The contrast that a messy GOP convention would strike with the Democratic Party’s stately and cordial affair might irrevocably alienate the millions of general election voters who support continuity and stability. We were so much younger then.

Today, the prospect of a contested GOP convention seems in retrospect merely the fanciful invention of anti-Donald Trump Republicans. Establishmentarian Democrats appear to have indulged in a similar misperception. Senator Bernie Sanders’ insurgent candidacy remains a potent threat to the stability of the Democratic coalition, due in no small part to the fact that this mutiny’s leader refuses to admit defeat.

Though he was not even a Democrat until last September, Sanders, a politician who has geared his career toward serving as a professionally quixotic walking critique of the nation’s liberal establishment, has performed remarkably well in the race for his adopted party’s nomination. As of this writing, Sanders won 20 contests to Hillary Clinton’s 26. He has secured the votes of 9.6 million Democratic primary voters and has acquired the support of 1,437 pledged delegates to Clinton’s 1,717.

The self-described socialist from Vermont has given every indication that he will fall in line behind the Democratic Party’s nominee in order to defeat Trump in November, but the work of reunifying the party grows more difficult with each passing day.

It is perhaps understandable that Sanders supporters are frustrated by how close they came to an upset in the primary process, a sentiment that Sanders has done nothing to tamp down. Further, there is a prevalent perception among the nation’s progressive mutineers that the process is being arbitrated unfairly by “superdelegates,” an institutionally biased group of longtime party loyalists who threw their support behind Clinton well before Democratic voters weighed in on the process.

These frustrations reached a boiling point in Nevada over the weekend, leading to a confrontation between the Democratic Party’s elected leaders and its disgruntled insurrectionists at the Silver State’s nominating convention. Armed with a thorough knowledge of orderly procedure, Sanders-backers infiltrated the convention and attempted to force several rounds of balloting with the aim of restoring 64 delegates loyal to the Vermont socialist who had previously been disqualified. “DNC leaders refused to reconsider their decision not to allow this, adjourned, and fled the building amid a chorus of boos,” Real Clear Politics reporter Tim Haines reported.

Amid the spectacle, outgoing California Democratic Senator Barbara Boxer took the stage and demanded “civility.” Her appeals were loudly rejected. “When you boo me you’re booing Bernie Sanders,” Boxer informed the overtly hostile crowd. “Go ahead. Bernie is my friend. You want to boo Bernie, boo me. Go on, you’re booing Bernie.”

“I am not afraid of bullies,” the senator continued. “I’m for all of us. So keep on booing and boo yourselves out of this election.” Having doused the convention in gasoline, the senator and her establishmentarian Democratic colleagues threw a lit match over their shoulders on their way out of the building. The resulting chaos was left to hotel security and the local sheriff’s office to sort out. Despite appeals from law enforcement and the hotel staff to leave the convention site, Sanders supporters declined to evacuate the scene. Eventually, hotel staff simply turned off the lights.

Sanders voters may be setting the stage for a symbolic display of dissent at the Democrats’ nominating convention in Philadelphia similar to that which Ron Paul supporters engaged at the GOP’s Tampa convention in 2012. Amid the usually perfunctory pageantry in which state-by-state delegations are called and seated by the convention chair, Paul, surrounded by friendly delegations from states like Maine and Hawaii, led his delegates in a loud pro-Paul protest. The departure from choreography attracted media attention disproportionate to the display’s objective significance. That was, in its own way, a victory of sorts.

A few pro-Paul delegates supporters were so committed that they bucked the party’s binding rules and voted for their candidate in defiance of the will of their states’ voters. “They have no respect for the process, so I have no respect for them,” Nevada delegate Rob Tyree said of the Republican National Committee. “This is a case of blatant cheating.” The ranks of Sanders supporters in Philadelphia will be far more numerous than were Paul backers in Tampa. At the very least, they may be looking forward to putting on a show aimed at communicating their displeasure with a process they’ve determined is hopelessly prejudiced. If Democrats in Pennsylvania respond to dissent as did Democrats in Nevada, the party will be willingly confirming that suspicion. 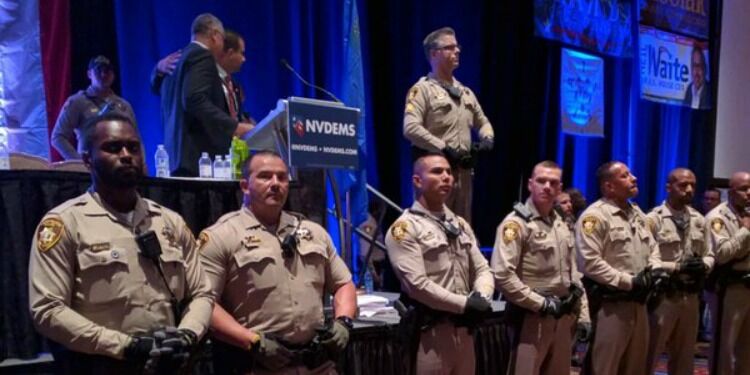