The latest issue of the Atlantic posits that America is coming apart, and its lead essay submits that Republicans and conservatives are to blame.

Yoni Applebaum’s contribution to the symposium, entitled “How to Stop a Civil War,” paints a dire portrait of modern American life. Its people are sorting themselves into like-minded camps. Its partisans are so mutually hostile that they cannot even tolerate intermarriage across party lines. Its activists are once again engaged in political violence, and its fringes are flirting with secessionist movements. Most troubling, its institutional stewards are wrecking the mechanisms that preserve republican democracy and doing so only to preserve their power. Applebaum’s perfunctory admonitions directed at both sides of the spectrum do not mask those whom he believes are the real culprits: the people of the American right.

Applebaum is not without evidence in support of his thesis. President Donald Trump’s fatalist rhetoric reinforces his supporters’ misconception that each election is an existential conflict. He has subordinated moral suasion and ideological consistency to appeals to identity-based solidarity. The symptoms of despair that typify modern political life are evident in the nihilistic disregard his allies display when confronted with the president’s assaults on the conventional codes of conduct and democratic mores. All true. But a myopic focus only on these lamentable conditions contributes to a misdiagnosis of both the cause and the symptoms of the national malady that Applebaum seeks to address.

In Applebaum’s estimation, the right’s anti-democratic impulses are fueled by a fear of inexorable demographic change. It’s a familiar argument that benefits from a lack of critical inspection. The Republican electoral coalition has evolved over the decade and is whiter than it once was, but it’s also more blue-collar. In fact, “working-class voters of all races account for more than two-thirds of all GOP voters,” as the Wall Street Journal’s analysis shows. Moreover, if the president’s identity-focused agitation was so all-consuming, we would expect to see attitudes among the white demographics he is agitating to become more hostile toward minorities. The opposite has occurred. Applebaum acknowledges this phenomenon obliquely by noting that Trump’s restrictionist views on free trade and immigration have produced a diametric effect on voters, who are increasingly embracing the value of both. This would seem a fatal flaw at the outset of the author’s hypothesis.

Upon this flawed foundation, however, Applebaum erects an elaborate edifice of threats to the American democratic ideal, almost all of which he alleges are Republican projects. Among the right’s offenses: “conservative justices on the Supreme Court gutted” the Voting Rights Act in 2013; Republicans “indulged” in partisan gerrymandering “more heavily” than their Democratic counterparts; a Republican-led legislature in Pennsylvania tried to impeach the state Supreme Court justices who invalidated their partisan reapportionment; and the president attempted to reconfigure the 2020 census to “suppress” the respondent rates from immigrant populations.

This fact pattern would be a damning indictment if it withstood scrutiny. It does not.

In 2008, eight of the Supreme Court’s nine justices, including all its liberal members, joined a majority opinion authored by Chief Justice John Roberts preserving the VRA as it was written in 1965, but not indefinitely. The opinion warned that the “evil” that portions of the act were meant to extirpate “may no longer be concentrated in the jurisdictions” covered under a decades-old formula. The VRA was not intended to deny certain states and municipalities sovereignty in perpetuity. But Congress did not update the VRA, and so the Supreme Court did. Applebaum contends that the extension of federalism into portions of the country that the Court found no longer merit the kind of restrictions imposed on them a half-century ago undermines democracy. That conclusion is dependent on a narrow definition of what constitutes democracy.

Applebaum is correct that a number of Republican gerrymanders are being challenged in courts, some successfully. But this is more attributable to the fact that Republicans controlled more legislatures and thus more reapportionment processes than to the party’s uniquely nefarious anti-democratic instincts. There is no shortage of Democrat-initiated gerrymanders who were struck down in the past, and it is not difficult to find questionable state-level maps in Democrat-led states today.

Surely, the intentions of Pennsylvania’s GOP in its 2018 impeachment push were only as wicked as those of the voters and politicians in Wisconsin, who sought to remove their newly elected Republican governor in a recall election in 2012. That is to say, the appeal to constitutional mechanisms to effect desired political outcomes—both of which, by the way, failed. Sordid? Certainly. Anti-democratic? Hardly. These are not threats to the constitutional order but the exercise of it.

Along these lines, Applebaum’s core (and valid) concern is the prospect that the American right may soon not “accept some electoral defeats.” That is a dangerous habit, but it’s one that is today almost exclusively exhibited by Democrats. George W. Bush was supposedly the beneficiary of a “stolen election.” Donald Trump, too, is not a “legitimate president.” The price of admission into the Democratic tent today demands evidence-free claims that both Florida’s Andrew Gillum and Georgia’s Stacey Abrams would now be governor but for the machinations of villainous Republican operators. Republicans, too, have made claims of this sort in the past involving the legitimacy of Presidents Bill Clinton and Barack Obama. Nevertheless, these presidents remained constitutional officers. Those who insist on their electoral legitimacy despite their objective failure at the polls have not yet inspired insurrections on their behalf.

That does not mean we might not will such movements into existence by mistaking overheated rhetoric for calls to arms. Applebaum’s fears for the future of democracy are not unfounded, but those concerns would apply as much or more to the modern American left. It is the firmest conviction of some of the Democratic Party’s most prominent lawmakers that the nation’s highest offices are currently in illegitimate hands. The renewed threat of politically motivated street violence is a phenomenon as much or more native to the fringe left than their right-wing counterparts. And perhaps most disturbing, it is the left and their allies in respectable media institutions that are most inclined to view distasteful but legitimate political practices as grave affronts to constitutional decency when practiced by Republicans. If your objective was truly to “stop a civil war,” tactics like these may one day prove fatally counterproductive. 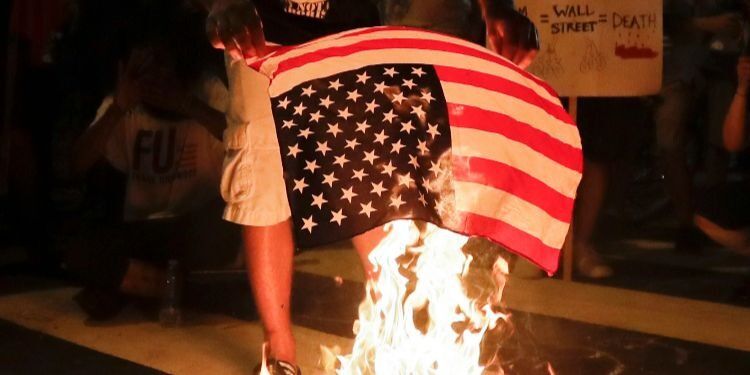