There may be no one with whom partisans on both sides of the political divide have a more conflicted relationship with than FBI Director James Comey. During the 2016 election cycle, he served for partisan liberals and conservatives as, at varying points, both savior and antagonist. Observers suffered whiplash watching as the FBI director evolved from upstanding and forthright public servant to political hack seemingly overnight. Today, while few will permit themselves to say it aloud, Democrats depended on Comey to corroborate their nagging suspicion that either Donald Trump or his associates collaborated with Russian officials. It was, thus, more than a little imprudent that so many Democrats spent the better part of the last five months attacking the FBI director’s credibility.

Well before Monday’s hearing began, Democrats and liberals set an impossible bar for Comey to overcome. Public reporting has overwhelmingly established that many of President Trump’s campaign associates had contact with Russian officials. Comey, albeit through omission, confirmed these associates were the subject of an FBI investigation. Further, as Director of the National Security Agency Mike Rodgers reaffirmed, it is the assessment of the American intelligence community that Russia interfered in the U.S. electoral process with the aim of helping Donald Trump’s prospects. Finally, Comey revealed on Monday the existence of an ongoing investigation into the matter of the Trump campaign’s connections to Russia. Yet none of this is going to satisfy the left. They want a silver bullet. If Democrats are hoping that this investigation will result in the neutralization of the nascent Trump administration, though, they’re likely to be disappointed.

By setting the establishment of “collusion” between the Russian government and the Trump apparatus as the benchmark by which the investigation into the president’s 2016 campaign will be judged a success, Democrats are setting themselves up for a letdown. If the Trump administration came into office with a mission of reorienting American grand strategic objectives to comport with Moscow’s, they appear to have given up on that charge. The Trump administration does not have a coherent policy toward Russia. In many substantive ways, Trump’s approach to addressing the Kremlin’s threats to global stability looks a lot like Barack Obama’s.

Furthermore, it appears that Democrats have forgotten the emotional roller-coaster that was the FBI’s investigation of Hillary Clinton. Liberals imprudently celebrated when Comey delivered a statement in June of 2016 indicting Clinton for her behavior at the State Department in every way but literally. The FBI determined that, despite her “careless” treatment of classified intelligence, she had not put herself in a position to be prosecuted.

The esteem the FBI director enjoyed among Democrats evaporated the minute Comey released a letter in late October alerting congressional investigators to the existence of new and pertinent evidence resulting from a probe into former Representative Anthony Wiener’s contacts with an underage girl. Democrats lamented that the FBI director’s letter reminded Americans about the conduct of this sordid cast of political aspirants. In so doing, though, Democrats unwittingly conceded that their party had elevated a bunch of disreputable miscreants to its highest echelons.

Still, the left has convinced itself Comey’s letter was designed to influence the election in Trump’s favor. The simplest explanation is that he was complying with a congressional mandate to keep the legislature informed of updates to the Clinton case (and to avoid perjuring himself). Democratic apoplexy over Comey’s letter was unwarranted. There was plenty of public speculation even at the time that the emails discovered on Weiner’s computer were duplicative or innocuous. And in the end, that was how the FBI described them. Similarly, public reporting suggests that, at this point, there is no evidence of deliberate coordination between the Trump campaign at the highest levels and Russian governmental or intelligence officials.

In 2016, Democrats imprudently sought to transform the FBI director into a political actor and then feigned shock when his actions had political consequences. In the process, they helped rob America’s chief investigatory officer of his credibility. If the investigation into Donald Trump’s campaign follows a trajectory similar to the investigation into Clinton, the FBI will sap the White House of political authority and legitimacy. The expectation, however, that this investigation will result in the discovery of impeachable offenses that would justify congressional prosecution seems at this stage to be a false hope.

Anything could happen. But if the FBI proves the president did not deliberately collude with the Russian government in 2016, the efforts of Democrats in 2016 to attack Comey’s integrity ensures that liberals will not accept the FBI’s finding.

Democrats are unique here. Republican opinions of Comey’s independence and competence, too, were directly linked to his willingness to accuse Hillary Clinton of criminal conduct. Yet it was the Democratic Party, including the former Senate minority leader and the former presidential nominee herself, who tried to attack Comey as a “Republican operative” who single-handedly “stopped [Clinton’s] momentum.” If the FBI director absolves the president of the allegation he worked with Russia to undermine the Clinton campaign in 2016, don’t be surprised if liberals don’t believe him. For many on the left, the idea Trump and Russia worked hand-in-hand to defeat Clinton at the polls has become an article of faith. As a result of the Democratic Party’s imprudent pursuit of an expedient way to shift the blame for their failures, no one has the credibility anymore to tell their voters otherwise. 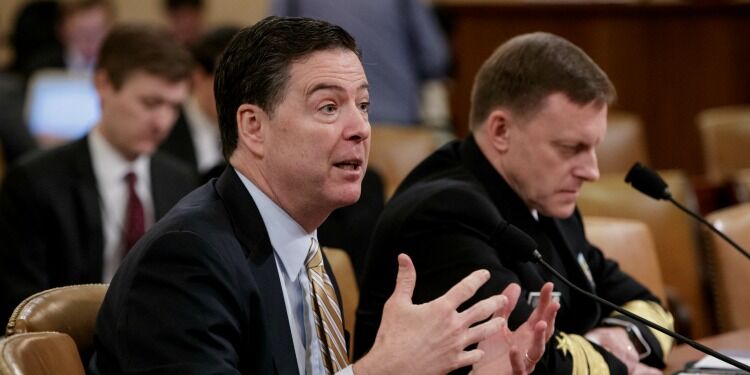