Democrats who had hoped to witness some sign in last night’s off-year elections that the public had abandoned their antipathy toward the president’s party ahead of 2016 saw those hopes unceremoniously crushed. With only a few of exceptions limited to the Northeast and a handful of urban centers, Democratic candidates and liberal causes were again trounced at the polls.

In Virginia, Democrats had hoped to recapture control of the state Senate, but the GOP majority held. Democratic Governor Terry McAuliffe’s aspirations to turn his state into a laboratory experiment in which every progressive social policy favored in Washington would be imposed on Old Dominion’s residents were dashed. In San Francisco, the city’s sheriff who had staked his career on defending his “sanctuary cities” policy, which came under fire following the murder of Kate Steinle by a Mexican illegal immigrant, lost his job. Ballot measures in Ohio and Houston, Texas, regarding legalized marijuana and transgendered bathrooms (which would allow all men dressed as women to access female-only restrooms), went down in flames. Perhaps the most fascinating and far-reaching result from last night was the election of conservative outsider candidate Matt Bevin as Kentucky’s governor.

Bevin’s victory is no modest feat. Having previously run as a spoiler insurgent in primaries against no less an establishment figure than Senate Majority Leader Mitch McConnell, Bevin was the party’s first choice for nominee. His candidacy was plagued by missteps. His opponent, state Attorney General Jack Conway, was outspending the GOP candidate by a 4-to-1 margin as recently as three weeks ago, and the Republican Governors Association briefly stopped airing ads on Bevin’s behalf. Kentucky has only elected three Republicans to the governorship since the end of World War II, and Bevin’s standing in the polls had collapsed heading into Election Day. Even the GOP candidate’s own internal pollster showed him losing to Conway by a substantial four points.

In the end, it wasn’t even close. Jack Conway drew just under 44 percent of the vote to Matt Bevin’s 52.5 percent. Mirroring McConnell’s shocking 2014 victory over Secretary of State Alison Lundergan Grimes, a race that was supposed to be a nail-biter was put to bed just after 8 p.m. The margin of Bevin’s victory suggests this race was never close.

There are a number of conclusions one could reach from Bevin’s victory, and many of them are valid. There will be pieces written about the Year of the Outsider, which has favored rogue candidates, the strength of disaffected conservatives’ voting coalition, and that even a flawed candidate like Bevin can emerge victorious over a groomed and disciplined establishment Democrat. Certainly, more than a handful of political journals will observe that the South is no country for Democrats anymore and that the Louisiana gubernatorial runoff in late November might not be a lost cause for Senator David Vitter — a Republican candidate markedly more flawed than Bevin. Of course, the Kentucky gubernatorial race will also be cause to note the hopelessly broken science of public opinion polling that, Canada’s parliamentary elections notwithstanding, has consistently underperformed expectations around the world. Perhaps an overlooked but nevertheless compelling takeaway from last night’s race is the increasingly homogenous nature of American politics. Even statewide races without a federal office at stake have become nationalized. For this condition, Democrats only have themselves to blame.

“All politics is local,” famously quipped the Democratic House Speaker Tip O’Neill. He never envisioned ObamaCare. Kentucky’s outgoing Democratic Governor Steve Besmear sought to turn the Bluegrass State into the model for implementing the Affordable Care Act. He became a favorite among progressives for bucking the state’s increasingly conservative political culture. Even on Election Day morning, Besmear declared that Democrats will run proudly on ObamaCare in 2016 and “will pound Republicans into the dust with it.” Conway did not run away from the ACA, while Bevin pledged to dismantle the state-based insurance exchange. ObamaCare might have been the most compelling of issues in this race; it swamped local concerns, it rendered Bevin’s eccentricities and missteps moot. The most intimate and personal of concerns is now a federal issue. Kentucky was supposed to serve as a model for Democratic resurgence in a traditionally red state with faint purple hues. Instead, the party must now contemplate whether it’s worth investing in a nominee to challenge Senator Rand Paul next year.

COMMENTARY’s Jonathan Tobin astutely noted that the Affordable Care Act cannot continue to exist in its present form. It is simply unsustainable, and it is preserved only by the ever tightening phalanx of liberals protecting it from any substantial revision. As predicted, premiums are skyrocketing, the rolls of the insured are not expanding as is necessary, and many of the law’s funding mechanisms are not yet and probably will never be fully implemented. ObamaCare’s namesake will leave office soon, and the law’s Praetorian Guard will follow. Democrats were always fooling themselves when they pointed to Obama’s modest job approval ratings, assured themselves that the laws of political gravity had been repealed, and contended that the outgoing two-term president would be an asset for his party on the campaign trail. Reports have been surfacing for weeks previewing how Obama will capitalize on his alleged popularity in traditionally blue states. Obama’s presence on the trail might energize dispirited liberals, but it will also make the GOP’s job of casting the election as a referendum on his tenure and the permanence of his signature legislative achievement a much easier one.

Democrats have sacrificed a lot for ObamaCare. The party that rode two anti-GOP waves to unqualified power has been decimated. In 2009, Democrats controlled 62 of 99 legislative chambers, 29 governorships, and substantial majorities in both chambers of Congress. Today, the GOP controls 70 percent of all legislative chambers and 32 governorships. Nearly half the population of the United States lives under total Republican control. In the Congress, Republican majorities in the lower chamber appear nearly impossible to oust in this decade and the project of retaking the Senate in 2016 now seems a daunting task despite the number of exposed GOP members in traditionally Democratic states. If Democrats were to lose the presidency in 2017, they would no longer be able to avoid taking stock of the full scale of the party’s decimation. Obama’s hold on the White HoOuse has masked the scope of the party’s truncation.

Democrats continue to hold out hope. They contend that Americans who head to the polls next November will be voting for any number of things; roads and bridges, improved public schools, anti-discrimination laws, voting rights, equal pay, combating the scourge of income inequality, and the forever deteriorating climate. The left claims unconvincingly that voters will rush to the polls for the national election, but they will end up voting local. But local politics isn’t what it used to be. ObamaCare saw to that. Maybe all politics is national, now. After all, Barack Obama’s Democrats wanted it that way. They sowed the wind, and they must now reap the whirlwind. 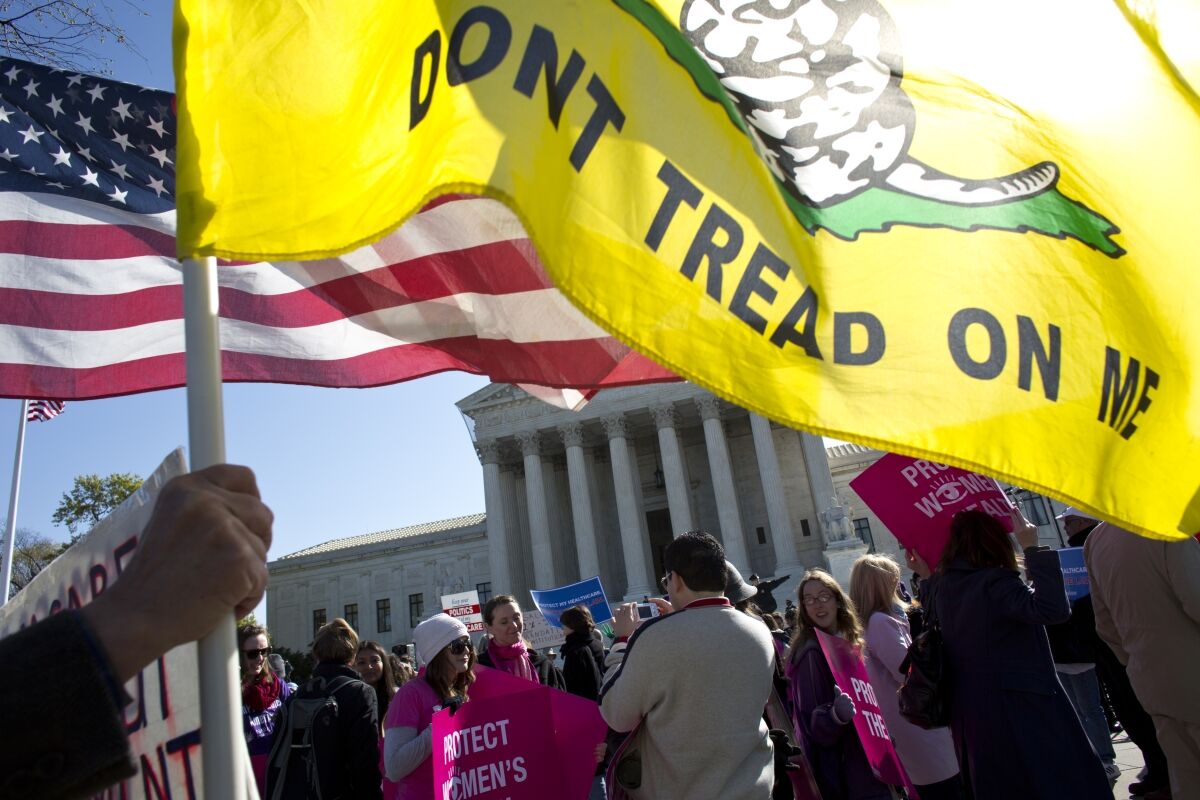