When does ethnic cleansing become genocide? If that tipping point has not already been reached in Burma, it may be coming soon.

We don’t know how many have died in the forced expulsion of Rohingya Muslims from their homeland by the Burmese government, but the number is not small. “400 killed,” “More than 1,000 Rohingya feared killed,” “Up to 3,000 Muslims killed.” For months, the bodies have piled up. These numbers are, however, abstract. It takes a human story to make these atrocities real, and the New York Times has published some of the most affecting human stories from the killing fields of Burma.

Conflict reporter Jeffrey Gettleman opened his dispatch revealing the horrors to which the Rohingya are subjected with a traumatizing account of one woman’s experience at the hands of her tormentors in the Burmese military:

“You,” the soldiers said, pointing at her.

She squeezed her baby tighter.

In the next violent blur of moments, the soldiers clubbed Rajuma in the face, tore her screaming child out of her arms and hurled him into a fire. She was then dragged into a house and gang-raped.

“By the time the day was over, she was running through a field naked and covered in blood,” Gettleman added. “Alone, she had lost her son, her mother, her two sisters and her younger brother, all wiped out in front of her eyes, she says.” This is happening right before our eyes.

Writing in COMMENTARY in 2009, Tod Lindberg identified an undeniable fact, which nevertheless engenders passionate denials from those who wish it wasn’t so. Acts of mass murder are not a fact of life with which we must make our peace. There is one way to stop ongoing acts of genocide, but only one: the application of American military force. No other nation can project sustained power in the required manner, and no other nation will lead the world toward such a righteous cause.

Of course, that’s not going to happen. The United States has overextended itself abroad. The American public has no interest in involving itself in a humanitarian intervention in Southeast Asia. The “international community,” whatever that is, has a lot invested in Myanmar’s de facto leader, Aung San Suu Kyi, a Nobel Peace Prize winner and the last, best hope that the junta in control of Naypyidaw for decades would cede power to democratic reformers. Suu Kyi’s political position is precarious, they’d say. We simply cannot put pressure on her government without jeopardizing liberal reforms.

Even Republican Senate Majority Leader Mitch McConnell has adopted this position, opposing something as modest as a resolution expressing dissatisfaction with how Suu Kyi has managed this crisis, which has been petulant and equivocating. “My personal view is America kind of singling her out, and lecturing her when she’s in a very challenging position is not helpful,” he said. It seems the burning of infants alive, the use of rape and starvation as weapons of war, ethnic cleansing, and mass murder would at least merit a finger wag from the beacon of democracy.

These excuses–and they are excuses–mask the real reason America and the West are disinclined to prevent mass death: We just don’t want to. The West was not overextended in 1933 when the first Nazi death camps were established. The Atlantic Alliance was not concerned with Pol Pot’s precarious political position when up to 3 million Cambodians were led to the slaughter. We agonized only briefly over the moral imperative of intervening on behalf of the hundreds of thousands of Rwandan Tutsis who were interned in mass graves. Only when it is too late do politicians confess to how haunted they are by the dead who might have been saved and Hollywood makes a movie scolding the society of which they are a part from a cynically Olympian remove.

In 2014, Barack Obama reluctantly approved of military intervention on behalf of the besieged Yazidi population, which was being systematically exterminated by the Islamic State militia in Iraq. That intervention resolved an immediate crisis, but it was far too limited to effect a permanent solution. The United Nations alleges that the mass murder, displacement, and persecution of Yazidis continue to this day. On its way out, Obama’s administration began exploring the prospects of taking ISIS to court to prosecute those responsible for this ongoing atrocity, but only years from now; when it’s all over and the bloody work is done.

A nation sees to its own interests. Pure altruism and the associated costs are not often in a nation’s interest, and those who advocate the loss of blood and treasure without taking those interest into account are engaged in performative moral preening, not statecraft. It is, however, incumbent on us to acknowledge that it is within our power and no one else’s to prevent human suffering on the scale we are witnessing in Burma. When we do nothing, that is a choice. And when we make that choice, we expose “never again” as the lie that it always was. 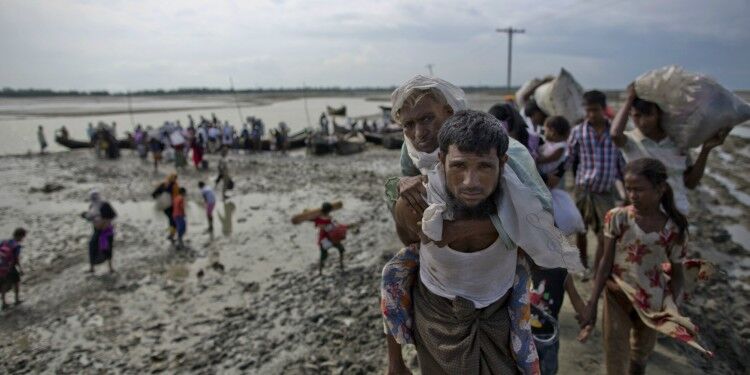