The political press is panicking, and some are starting to contemplate desperate measures. Anxiety among Clinton allies has led them to demand that political media take the reins from her lackluster campaign. Members of the political press appear spooked enough to debate the pros and cons of the proposal. The threat posed by a Donald Trump presidency is so great, some on the left contend, that it demands extraordinary measures—by serving as judges of his mendacity. Given how accommodating the political press was to Donald Trump when he was useful to the left, the predicament in which the press finds itself today is both revelatory and deserved.

Hillary Clinton and her allies have spent the last week insisting that Donald Trump is a liar like no other candidate in history, and for reporters to fail to call him out on that would be to judge him by an unacceptably lax standard. Political media have heard the call.

Over the weekend, the New York Times released a report itemizing every fabrication Trump uttered over the course of the last week (they found 31). The Los Angeles Times observed that the volume and frequency of Trump’s lies render them impossible to fact check. The Washington Post and Politico both echoed these themes. “According to POLITICO’s five-day analysis,” the Beltway publication reported, “Trump averaged about one falsehood every three minutes and 15 seconds over nearly five hours of remarks.” The frenzied nature of this fact-checking is tough to ignore. The tone of the coverage of Trump’s candidacy has grown markedly more hostile since the polls began to tighten.

Let us note that this passion on the part of the press to nail Trump just did not exist when he was in the pole position during the GOP presidential primaries. Then, the joke was on Republicans, as the media lapped Trump up.

From the moment he descended the escalator, Trump infused life into a moribund cable news industry in the middle of an off-year slump. His candidacy evolved from spectacle to draw. A Shorenstein Center analysis found that Trump generated 63 percent of total media coverage from January 1 to July 1, 2016. Moreover, that study found that the vast majority of coverage of Trump in print and television media was “positive or neutral in tone.”

“Across all the outlets, Trump’s coverage was roughly two-to-one favorable,” they discovered. More than 80 percent of Trump coverage in that period was focused on the horserace, his campaign events, or tawdry and fleeting controversies resulting from the candidate’s trademark garishness. Just 12 percent of media analysis was devoted to “issues and ideology.”

Media venues bent longstanding rules and sacrificed journalistic norms at the altar of advertising revenue generated by Trump appearances. In March, an analysis of the coverage of the presidential race found that press outlets had given Trump the equivalent of $2 billion in free exposure, much of which came in the form of unfiltered, live coverage of the candidate’s rallies amid the expectation that he’d say something titillating and raw. He usually did.

Few in the press lent much credence to the idea that this was a Faustian bargain for which the bill might one day come due. They thought Trump was easily beatable, even by a middling candidate like Hillary Clinton. And who could blame them? Here was a loutish neophyte with a cooperative set of cheerleaders in conservative media vaulting him over a legion of competitors—any one of whom polled markedly stronger than he did against Hillary Clinton. With the Democratic Party asking for a third consecutive term in the White House behind a modest economic recovery, a host of nightmares abroad, and mediocre political talent in Hillary Clinton, they needed a miracle. They thought they had gotten it in the form of the GOP nominating a candidate utterly unsuited to the presidency.

Today, all of those heady assurances are gone. Hillary Clinton is now actively requesting that the press—specifically, Monday night’s debate moderator, Lester Holt—do her job for her. Moreover, she has a booming cheering section who echo this demand. But Clinton’s request is not merely ethically dubious but wrongheaded. Not only is Holt’s job not to serve as the Democratic nominee, but Clinton could benefit from dissecting Trump’s deceitfulness herself, presuming he resorts to that. Panic has a way of making rational thought seem like a half-measure.

Members of the liberal commentariat who today demand that the press treat Trump differently than they would any other candidate because he is a unique threat to liberal democracy unwittingly exposed themselves last year and earlier this year. The time to panic was on the eve of the GOP primaries in January. But he was useful then. 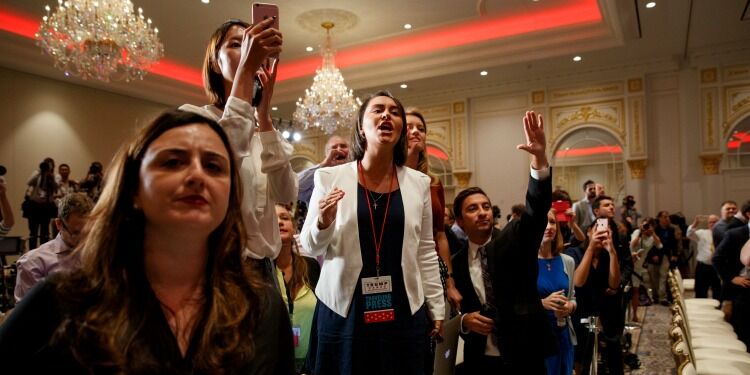