There are two clear takeaways from Tuesday night’s Democratic debate. The first and most obvious is that Elizabeth Warren is now the Democratic Party’s presidential frontrunner if only because of the amount of fire she drew from her fellow candidates. What was perhaps more notable about last night’s debate was that the candidates who made Warren squirm were the Democratic field’s “moderates.” And while Sen. Amy Klobuchar deserves honorable mention for delivering her most spirited and compelling performance since she jumped into the race, it was South Bend, Indiana, Mayor Pete Buttigieg’s night.

The most remarkable thing about Buttigieg’s performance was not his effective rhetorical style, but the way in which he dispatched with one Democratic opponent after another by going after them from their right.

Buttigieg was not the first Democratic candidate to observe that Warren will not give a forthright answer when asked if middle-class Americans will pay more in taxes to support her health-care plan, no matter how many times the question is asked. But his dismantling of Warren’s serial evasions was among the more satisfying offerings, in part because he attacked her lack of candor without trying to ingratiate himself to her voters in the process.

Buttigieg attacked Warren’s penchant for prevarication, accused her of engaging in classic Washingtonian fashion, and made a mockery of her habit of claiming that she has a “plan” for just about everything by noting that what’s missing from that portfolio is a “plan” to pay for a $30 trillion health care overhaul.

Buttigieg’s alternative to Warren’s single-payer health care reform plan—a Medicare “buy-in”—still runs up against the problem that Medicare’s hospital insurance fund is likely to reach the point of insolvency by 2026. But by attacking the senator from her right on both health-care reform and fiscal profligacy, he won the exchange and secured a centrist position that is broadly palatable not only to most general election voters but most Democrats.

Having claimed the moderate ground on fiscal issues, Buttigieg pivoted to the culture war (yes, tragically earnest partisans: No matter what you think of gun policy, it’s become a cultural signifier). For example, only the most politically illiterate observer could see Rep. Beto O’Rourke’s proposal for a confiscatory gun control regime as anything other than throat-clearing. It was a welcome change to see a Democrat refuse to sift through O’Rourke’s mental gesture for some morsel of value. Buttigieg dismissed it in whole unless and until “you can develop the plan further.” The mayor waved it off as just one of many Democratic “purity tests” while at the same time turning in his most compelling moment of the night by savaging the former Texas congressman for questioning the bravery of those who disagree with him. “I don’t need lessons from you on courage, political or personal,” Buttigieg said.

Again, Buttigieg’s own policy proposals range from debatable to bizarre. His insistence that the obstacle before gun-control advocates is the presently shambolic NRA, not the members of Congress who represent millions of gun owners, is misleading. His claim that “we are this close to an assault-weapons ban” is made up out of whole cloth. But nevertheless, Buttigieg’s forceful seizure of both the moral high ground and the centrist position on guns loosened the left-wing stranglehold on the issue.

It was, perhaps, Buttigieg’s response to Rep. Tulsi Gabbard, who has fashioned herself a purveyor of Moscow’s worldview, that was the most enjoyable moment of the evening. Amid a strategic and humanitarian crisis in Syria precipitated by President Donald Trump’s unwise decision to merely contemplate the prospect of ordering a withdrawal of the small U.S. advisory force working with the Kurds, Gabbard blamed the situation on America’s non-existent “regime-change war” against the genocidal Assad regime. “The slaughter in Syria is not a consequence of American presence,” Buttigieg replied. “It’s a consequence of a withdrawal and a betrayal, by this president, of American allies and American values.”

Buttigieg’s contention that the events we’ve witnessed over the past week are the result of American introversion and indecision has the benefit of being objectively correct, which makes it an easier case to make. Buttigieg’s record as a veteran robbed Gabbard of the opportunity to demagogue the safety of America’s deployed soldiers, rendering her mute in response to his assault. And his contention that Trumps’ actions have sacrificed America’s credibility with its allies and partners around the world is inarguable. Indeed, Gabbard declined to contest the point.

Pete Buttigieg is not a man of the right. His agenda is not one a moderate Democrat would recognize. His court-packing plan, which would allow the Supreme Court’s justices the capacity to confirm a potentially deciding bloc of their own colleagues, could hardly be considered a Madisonian scheme of checks and balances. His contention that “only a president can build a sense of belonging in the entire country” exposes a chillingly unitary and expansive view of the role of the executive in American life. But the mayor’s capacity to claim rhetorical territory that tends to be the exclusive province of conservatives and libertarians served him especially well on Tuesday night. In the process, he’s shown that the Democratic Party is not yet entirely lost to the progressive fringe. 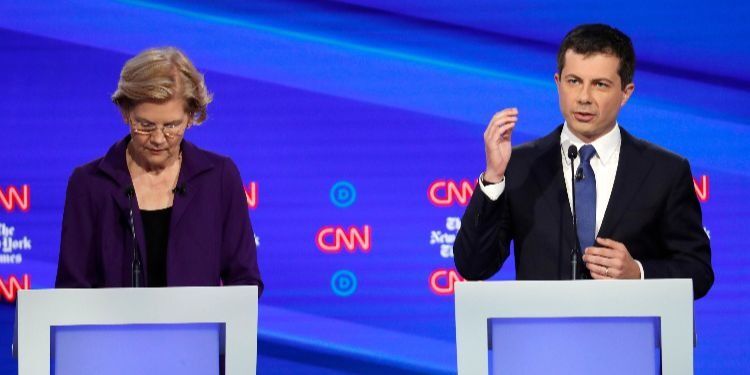