Two weeks after radical Islamic terrorists with organizational links to the Islamic State in Iraq and Syria executed a coordinated attack on a variety of Parisian targets, President Barack Obama toured the scene of the bloodshed alongside French President Francois Hollande. Reporters were on hand to witness and photograph the scene as the two leaders solemnly bowed before makeshift memorials to the 130 dead, but it was all theater. The American president wasn’t in Paris to pay his respects to the casualties in a war he is halfheartedly waging in the Middle East. Obama was there to address what he contends is the truest long-term threat to global security: climate change.

“Last Chance to Save the World,” the Huffington Post’s front page headline blared as world leaders gathered for a “do-or-die” climate conference in Paris. “Climate Change Should ‘Keep Us Up At Night,’” says the World Bank President Jim Yong Kim. “Obama Casts Climate Talks as World’s Last Best Chance,” Politico revealed. He sure did. “For I believe, in the words of Dr. Martin Luther King, Jr., that there is such a thing as being too late,” the President of the United States told the conference’s attendees. “And when it comes to climate change, the hour is almost upon us.”

That grave hour always seems to be “almost upon us,” but the climate change catastrophe somehow remains forever just over the horizon. Apocalyptic voices that seamlessly shifted from predicting a new ice age to the “end of snow,” those representatives of a politicized movement that resorted to falsifying data in order to propagate the fear of 50 million climate refugees by the year 2010, have the unremitting gall to accuse their skeptics of cynicism.

As the atmosphere refuses to heat up at predicted rates, the rhetoric over the climate threat is picking up the slack. With nightmarish predictions of a dystopian future failing to materialize, environmental sibyls’ predictions grow bleaker.

It is no surprise that a liberal American president would imply that the acute threat posed by incremental climatological shifts is more pressing than that presented by radical militants who are currently drawing gallons of blood in Europe and the Middle East. Obama’s ideological compatriots sincerely believe that climate change gave rise to Islamic radical terrorism in the first place, and to fight that scourge is to merely combat the symptoms of a perilous disease.

Bernie Sanders warned that climate change “poses immediate risks to U.S. national security” and is the single greatest threat to American interests abroad due to its role in creating ISIS. “[T]he effect of climate change and the mega-drought that affected that region, wiped out farmers, drove people to cities, created a humanitarian crisis, and created the… conditions of extreme poverty,” Martin O’Malley agreed. He made no mention of the extreme drought that plagued Syria from 2006 to 2010 and yet yielded no civil war, or the political conditions that led to the Arab Spring and toppled Middle Eastern and North African governments across the region without regard to their annual precipitation rates.

The left will point to one of many contingency reports commissioned for the Pentagon that contended climate change represents a “threat multiplier,” as though preparing for adverse weather-related conditions were alien to military planners before the birth of the environmentalist movement. They fail to account for a 2004 Pentagon forecast that determined the polar ice caps would by now melt annually, and low-lying parts of California and the Netherlands should be underwater. Those voices sounding alarms over climate change and pointing to government reports misunderstand the nature of bureaucracies, which are as or more concerned with avoiding blame and preserving their budgets as they are with disaster preparedness.

With all these terrible predictions failing to materialize, it is no wonder that the public is starting to tune out climate alarmists. An ABC News/Washington Post poll released on Monday confirmed the trajectory of public opinion is moving steadily and consistently away from the notion that climate change is a threat serious enough to justify dramatic government action. That finding, more so than those who contend climate change represents a grave threat, is telling. “I imagine there’s a certain amount of emotional gratification in telling a pollster you’re worried about global warming,” The Federalist’s David Harsanyi explained. “But how you act tells us something, too. Most Americans don’t feel obligated to make lifestyle changes. Maybe they intuitively understand trade-offs are necessary, but not worth it.”

Harsanyi noted that Americans are giving up on the supposed solutions to the plague of environmental degradation, almost all of which center on the notion that the developed world must forego the comforts of modern technology; cheap energy, a bountiful and safe food supply, and the freedom to reproduce at will among them. The notion that the American way of life is unsustainable and unfair toward the rest of the world’s population is an old argument, and its remedies are suspiciously familiar. It was once claimed that the prosperity of the first world must be curtailed if there was to be peace. In particular, America’s modern conveniences, its industrial capacity, its products of free enterprise were and are the result of the theft of the developing world’s resources. Today, the same diagnosis is applied to the problem of climate change. The prescription, too, is eerily familiar.

“The kind of agreement that we’re working toward will prove that the world’s leaders finally understand the scope of the challenge we are up against,” Secretary of State John Kerry insisted. “And it will help officials at every level of government know that they are part of a worldwide commitment to build sustainable economics.” What is “sustainable economics?” If you ask the Chinese, the world’s largest carbon polluters and a nation plagued by the kind of environmental degradation the United States hasn’t endured since the middle of the last century, it is the transfer of wealth from the developed to the developing world.

“Developed countries should honor their commitment of mobilizing $100 billion each year from 2020 and provide stronger financial support to developing countries afterward,” said Chinese President Xi Jinping in Paris. “It is also important that climate-friendly technologies be transferred to developing countries.” Replace the scourge of climate change with poverty and “climate-friendly technologies” with advanced military-industrial technologies, and you have a boilerplate Soviet speech aimed at an international audience. It is perhaps usurping that the notion that economic concessions to the communist world would result in better relations always found a more amenable audience in Western Europe, as do similar proposals with regard to the transference of wealth in order to mitigate the effects of climatological shifts.

Americans are displaying a waning interest in following the alarmists’ static prescriptions for addressing environmental challenges even as the nature of the problem is evolving. The crudest of climate change doomsayers will attribute this to ignorance or simply a pigheaded attachment to an unsustainable way of life. That is only so much fatuous nonsense. Americans have been privy to the same arguments for addressing climate change for decades, but they didn’t call it “climate change” during the Cold War.  Perhaps Americans deserve more credit for objective skepticism and an understanding of history than they are getting from the nation’s enlightened elites. 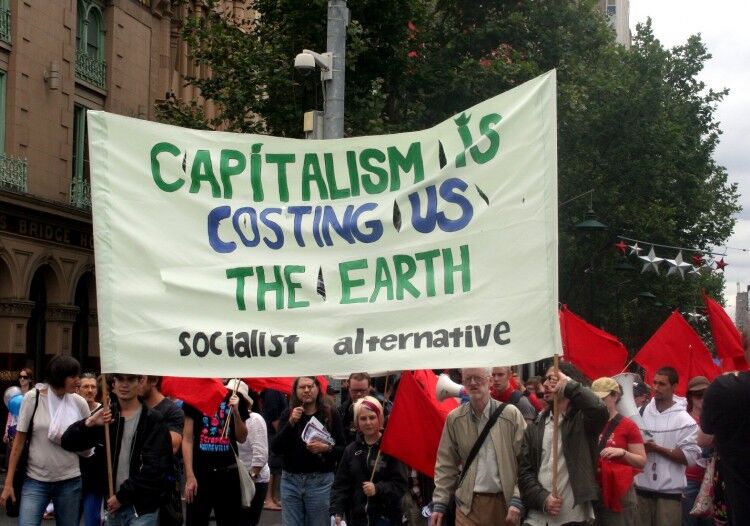