Republicans are campaigning on fear. At least, that’s the latest overwhelming consensus that the journalistic hivemind occasionally produces. And when the GOP is not stoking unfounded terror in the hearts of their constituents, they’re being patently mendacious.

The Washington Post declared that Trump and the GOP have settled on “fear” and “falsehoods” as a closing argument, with a little “racially tinged rhetoric” as a topper. On health care and entitlements, the report noted, the GOP has shown a willingness to “instill fear in their electorate.” On that topic, CNN’s reporters also accused Republicans of appealing to “fear and misdirection.”

You see, Republican lawmakers are suddenly supportive of protections for preexisting conditions despite their opposition to the Affordable Care Act. Moreover, the GOP’s efforts to highlight Democratic support for a Senator Bernie Sanders-style single player plan is just “a way to invoke socialism to scare voters.” As an aside, CNN observed that Obamacare “turned out to be really popular” and the GOP has campaigned on promises to “to cut entitlement spending ruthlessly.”

This Center for American Progress email blast cleverly disguised as journalism eventually got around to explaining that the effort to sever the ACA’s preexisting protections provisions from the now-repealed “individual mandate” is a legal, not political, matter. Every replacement bill Republicans have offered has reintroduced those protections in some form, after all. What’s more, Republicans who genuinely fear the insolvency crisis that America’s entitlement programs will face in the next 15 years would love a champion who promises to “ruthlessly” curtail the growth of those programs, but they don’t have one—not in the White House and not in Congress. As for the terrible unfairness of invoking “socialism,” it isn’t the GOP that’s making Democratic candidates embrace that label or a policy that would effectively nationalize the health-insurance industry.

Republican fear-mongering is even worse when it comes to issues like race and immigration, the journalistic establishment has observed. The Globe and Mail’s report detailed the GOP’s efforts to agitate against migrants, particularly on Twitter. In a “special report,” Reuters detailed the ways in which “Republicans are using immigration to scare voters to the polls.” According to the New York Times, both Trump and the party he led had chosen to “escalate race and fear as election ploys.” “Fear itself, the White House figures, is just savvy politics,” wrote the Huffington Post’s Amanda Terkel of Trump’s effort to mobilize the GOP’s racial and cultural anxieties.

These articles have a point. Donald Trump’s attempts to suggest that radical Islamist terrorists from the Middle East had infiltrated the caravan of asylum-seekers traveling north through Mexico from Honduras—a claim that he admitted was unsupported—is fear-mongering at its worst. The Times is on solid ground when it impugns efforts by Republican candidates to cast Antonio Delgado, a Rhodes Scholar who toyed with a career in music, as a “big-city rapper.” Likewise, Indicted Rep. Duncan Hunter’s campaign to brand his Mexican-Arab-American opponent, Ammar Campa-Najjar, an “Islamist” “security threat” who is trying to “infiltrate Congress” is particularly egregious.

As just about all these articles note, though, election-year efforts by the incumbent party to stoke baseless—often jingoist or chauvinist—fears is a pretty standard tactic. And yet, you would be hard pressed to find such ubiquitous denunciations of Democratic efforts to instill in the minds of voters a near-existential fear of the GOP. Indeed, when fear-mongering was discussed in the press in past midterm cycles, it was only attributable to the Republican Party.

In 2010, Republicans were admonished for circulating RNC-approved documents that labeled Barack Obama a “socialist” and appropriated a caricatured portrait of the president as Christopher Nolan’s Joker. The GOP’s candidates were scolded for criticizing Barack Obama’s support for the construction of a mosque near “ground zero” in Manhattan. ABC News savaged Republican candidates who attacked Democrats for supporting programs that outsourced American jobs and exported U.S. capital to China. “Is that true?” ABC’s Jonathan Karl asked. “Yes, but it’s also misleading.” When Democrats fielded ads attacking the GOP’s support for “privatization of social security,” the efforts were deemed “exaggerations”—that is, when they were fact-checked at all, which was rare.

A party with its back against the wall routinely resorts to fear tactics. For much of the last decade, that was the Democratic Party. The liberal activist group, the Agenda Project, accused the GOP of wanting to eliminate Medicare in 2011, a prospect they illustrated by showing a Paul Ryan lookalike tossing an elderly woman over a cliff. In 2012, Vice President Joe Biden accused the GOP of seeking to reinstate the institution of black slavery. Sen. Bernie Sanders said Republicans seek the elimination of the Department of Veterans Affairs and Social Security in 2013. DNC Chairwoman Debbie Wasserman Schultz summarized the Republican platform as “let’s kick women” and “immigrants out of this country” in 2015. Hillary Clinton followed suit by claiming that Sen. Ted Cruz had repeatedly “tried to ban contraception,” a claim that PolitiFact labeled only “mostly false.”

From the GOP’s “war on women”—a monomaniacal crusade to ban abortion, birth control, pregnancy tests, and equal pay laws—to the party’s racist agenda, it’s hard to find similarly condemnatory profiles of the Democratic Party’s 2014 campaign of paranoia. After all, “For many African-Americans, feelings of persecution … are hard to overstate,” New York Times reporter Jeremy Peters wrote of Democrats’ 2014 efforts to frame support for voter identification laws and gun ownership rights as racist, “And they see no hyperbole in the attacks.” In fact, it was the Republican Party that was cynically mobilizing unfounded “anxiety” to cobble together a winning coalition.

The kind of engagement that negative advertisements and fear-mongering generate always tempts the party on the ropes. The Democratic Party has the unique advantage of being able to stoke those grievances without being called to task for it by a prevailing culture in political media that largely agrees with them. 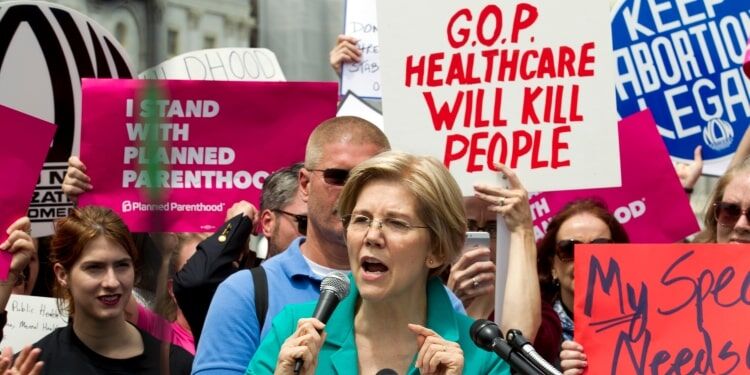