Republicans don’t care about sexual abuse victims. Telegraphed sotto voce or shouted from the mountaintops, that was the message Democrats and their allies attempted to convey from the second the effort to derail Brett Kavanaugh’s confirmation transitioned from accusations of racial primitivism and corruption to accusations of sexual violence.

Those who were receptive to this message did not dwell on how those who politicized a sexual assault claim had cheapened it. Nor did they think much about the implication in Democrats’ insistence that they were only prosecuting this allegation of violent criminal activity within the context of a “job interview,” thereby lowering the stakes and devaluing the gravity of the claims against Kavanaugh. The cognitive dissonance persevered in those  who wore their concern for sexual assault survivors on their sleeves despite the violation of Dr. Christine Blasey Ford’s confidentiality against her wishes.

Democratic partisans may be able to compartmentalize these contradictions in service to the goal of winning a few more seats in the federal legislature, but Republicans shouldn’t bet that the public will feel the same way. The GOP now has ample opportunity to join the game of hardball already in progress.

This week, Senator Heidi Heitkamp ran a searing attack ad against her opponent, Republican Rep. Kevin Cramer, criticizing him for looking down on #MeToo movement activists who he claimed should have more respect for evidentiary standards when alleging criminal activity. He invoked the women of his family, calling them “tough people” and “pioneers of the prairie” who cannot understand a “movement toward victimization.” Heitkamp’s ad featured a variety of other “tough people” that Cramer had allegedly disparaged—over 120 North Dakota women who were survivors of sexual assault. There was just one problem: Many of those women did not consent to their outing as alleged victims. Others were not victims at all.

A statement released by some of the women who were outed for political purposes savaged Heitkamp for releasing “personal information being used as campaign propaganda” without permission. Some of these women said their outing resulted in being “bombarded by questions” about traumatic events in their pasts. Those who were misidentified as victims “spent the day reassuring loved ones of their safety.” This ad, the statement continued, “interfered with, or downright ruined, our lives.” Heitkamp issued a public apology to these women and, under the threat of a defamation suit, retracted the ad entirely.

The investigation into how the ad came to be is still underway, but it appears to involve officials within the North Dakota Democratic Party. The party’s chairwoman and a candidate for tax commissioner, Kylie Oversen, said that she was responsible for vetting “fewer than ten names” all of whom provided her with permission to use their stories. Where the other 118 names came from remains a mystery.

Republicans are not just seeking political advantage when they demand a more thorough accounting of the events that led to this debacle. There is a sordid predisposition at work here. Surely the Democratic operatives who crafted and placed this advertisement intended no malice toward these women, but they also internalized a lot of assumptions about them, their politics, and their desire to be used as a political cudgel against Republicans. And in the process of forming these assumptions, these women stopped being three-dimensional people and started being tools.

This brings us back to Blasey Ford’s letter. “Sexual assault victims should be able to decide for themselves when and whether their private experience is made public,” she told the Senate Judiciary Committee. In her case, that duty was not respectfully observed. And yet, the only people who seem to care about the violation of this commitment are Republicans. It’s Senators Mitch McConnell, Charles Grassley, and Tom Cotton entertaining a congressional inquiry into the release of this woman’s identity to the press. Who wanted to leverage Blasey Ford’s experience to achieve a political end, even if that forced her to publicly relive her trauma? The public deserves an answer to that question.

Neither Democrats nor the political press seem interested in reestablishing the supposedly inviolable principle that a victim’s pain must be honored. Republicans, too, seem disinclined to pull on this thread. Perhaps they don’t want to sow any more enmity in the Congress than already exists. But these grotesque double standards cannot be allowed to stand unchallenged. If it is now fair game to contend that an entire political party is constitutionally hostile toward the female victims of abuse, it’s equally fair to note that those making this claim appear to be projecting their insecurities onto their opponents. Maybe then, when the stakes are evenly matched for both sides of this equation, we can begin to pare the terms of political engagement back to something resembling civic decency. 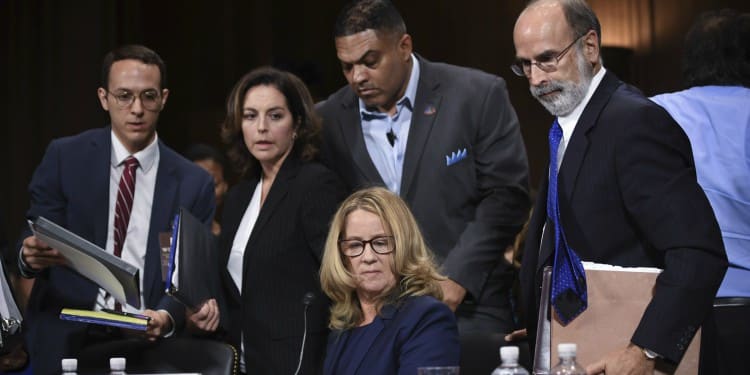