After a somnolent, nearly hour-long presentation focused primarily on touting his own efficacy and nudging historians toward a favorable view of his presidency, viewers surely sprung to life when President Barack Obama indulged in a rare moment of self-criticism in his final State of the Union address. “It’s one of the few regrets of my presidency,” Obama confessed, “that the rancor and suspicion between the parties has gotten worse instead of better.”

“There’s no doubt a president with the gifts of Lincoln or Roosevelt might have better bridged the divide, and I guarantee I’ll keep trying to be better so long as I hold this office,” he added. For the hundreds of Democrats who have been ejected from public office in the Obama era, it’s surely cold comfort to learn that the president has “few regrets.” Nevertheless, Obama’s decision to concede any missteps at all constitutes a rare moment of introspection and candor. The viewers’ sense of pleasant surprise was, however, quickly dashed. The president went on not to blame himself for the bitter partisanship that characterizes American politics, but you.

“There are a whole lot of folks in this chamber who would like to see more cooperation, a more elevated debate in Washington, but feel trapped by the demands of getting elected,” Obama averred. “And if we want a better politics, it’s not enough to just change a Congressman or a Senator or even a President; we have to change the system to reflect our better selves.”

Blaming voters and “the system” for the present suboptimal state of affairs is a teenager’s lament, but to indulge in any deeper analysis of the current crisis of confidence in American elected officials would be for the president to both invite and accept greater culpability for that reality. A broad-based rejection of authority itself, reflected in the surging support for demagogic populist presidential candidates on both sides of the political aisle, is a direct response to incompetent governance out of Washington. The acrimony that typifies partisan debate today is of a kind that Obama deployed skillfully when it suited his needs.

In the pursuit of his legislative goals, Barack Obama undervalued or outright abandoned the process of cross-aisle consensus building that makes governing in a republic frustratingly difficult for the aspiring caudillo. He has sought to frame himself as a racial healer of unparalleled sagacity while his allies in the press spotted Republican racism in words like “apartment” and “Chicago,” and whose attorney general repeatedly insisted that much of the criticism of the president was rooted in overt racial antipathy. Just a few weeks before he scolded the American public for their injudiciousness, the president was admonishing the American people over their refusal to welcome displaced Middle Easterners resettled into the United States. “At first they were too scared of the press being too tough on them in the debates,” Obama said of his Republican colleagues. “Now they are scared of 3-year-old orphans. That doesn’t seem so tough to me.”

This isn’t the work of some post-partisan unifier but that of a soapbox agitator. That is who Barack Obama was when he took office, and that is who he is today. It is without any hint of self-awareness that the Democratic politicians vying to replace the Obama in the White House invited Americans to observe a stark contrast in governing styles this week. Democrats have determined that Michigan Governor Rick Snyder presents their party with an opportunity to not only capitalize on an ongoing disaster but to rehabilitate the reputation of the party of government.

The city of Flint is in crisis. Drinking water there is contaminated with dangerously high levels of lead, and residents have been forced to rely on potable water provided by the state and federal government. Amid this crisis, self-described socialist presidential candidate Bernie Sanders called on Governor Snyder to resign. In her party’s fourth presidential debate, Hillary Clinton added her voice to the chorus calling for Snyder to step down. “We’ve had a city in the United States of America where the population which is poor in many ways and majority African American has been drinking and bathing in lead contaminated water,” she growled. “And the governor of that state acted as though he didn’t really care.”

Flint, one of a handful of spectacularly mismanaged cities in Michigan, was under the control of a state-appointed emergency manager when it switched its source of tap water from Detroit’s system to the Flint River in April of 2014. It was designed as an effort to save money, but the city soon found elevated levels of lead in the water and in children’s blood and ceased sourcing tap water from the nearby river last October. What Flint is facing is a crisis; it is a failure of public services and, ultimately, of both elected and appointed officials. Snyder, a self-effacing iconoclast who ran two successful statewide campaigns in deep blue Michigan, has not only acknowledged that fact but has declined the opportunity to pass the buck.

Days before Sanders or Clinton determined that there were nuggets of political opportunity to mine from the crisis in Flint, Snyder was calling on the oversight board that manages the disaster-stricken city to be returned to the mayor. He declared a state of emergency in Genesee County over two weeks ago and, one day after addressing the state’s voters in a January 13 press conference, requested a federal declaration of a state of emergency from the president. Two days later, the president obliged.

Surely, the technocratic fixer who dubs himself “one tough nerd” might have benefited politically from finding a scapegoat in one of the many Democratic public officials, who for generations have managed the state’s public affairs poorly, or the federal and state regulatory organs that kept quiet as this crisis intensified. Instead, Snyder took the whole affair on his shoulders. Not only that, but he accepted one of the most damning of modern political analogies in embracing a reporter’s description of the crisis in Flint his administration’s “Katrina.”

“What I’d say is I feel ter­rible about it, though, and it’s clear that changes needed to be made in my ad­min­is­tra­tion and I think long-term, there are things that need to be im­proved,” Snyder told National Journal’s Ron Fournier. “I want to solve this prob­lem. I don’t want to walk away from it.”

Democrats might soon find that unassuming figure they’ve chosen to contrast themselves with in Michigan makes for a rather poor foil. Snyder’s refusal to indulge in the blame shifting that has become a hallmark of this administration presents a contrast in leadership styles that does not cast the governor’s critics in the kindest of lights. 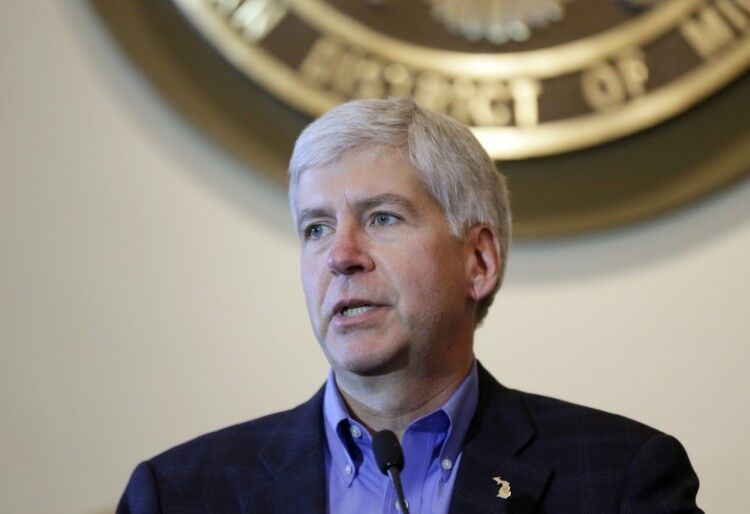