Like so many terrible things, it all began with a broken window.

Stewards of the historic Metropolitan Republican Club on Manhattan’s Upper East Side awoke on the morning of October 12 to see their institution vandalized. A brick had shattered two windows. The front locks were caulked shut. The entryway keypad was smashed. And the building’s two oversize wooden doors had been marred by graffiti—the anarchist’s wreathed “A.”

“Our attack is merely a beginning,” a message left by the gang of vandals began. “We are not passive, we are not civil, and we will not apologize.” The attackers were as hostile toward the “spineless” Democrats as they were toward the Republicans being targeted, but they were not ambiguous about what had motivated them on this particular night. “The Metropolitan Republican Club chose to invite a hipster-fascist clown to dance for them,” the note read. It was a warning, and not a hollow one. This was a sign of things to come.

The “hipster-fascist” to which they referred was Gavin McInnes, a broadcaster and instigator who has aligned himself with the right’s racially antagonistic elements. He is the founder of the “Proud Boys,” an organization that promotes the superiority of Western heritage and that has some members who have an affinity with the alt-right’s most violent activists. McInnes was invited to put on a show for a GOP audience, and he delivered. On social media, McInnes advertised his intention to reenact the 1960 assassination of a Japanese Socialist Party leader at the event, and he was seen by reporters outside the venue carrying a mock Samurai sword.

Both the Proud Boys and the counter-demonstrators were primed for violence, and violence is what they got. Two blocks away from the club, reporters shooting video captured the start of a fight that clearly shows McInnes supporters beating several counter demonstrators. Police were not present at the scene and no arrests were made, but the photographic evidence is clear enough as to which party was responsible for the altercation. Elsewhere, officers were privy to an attack on one of the event attendees by three counterdemonstrators. Those assailants, who were described by a Legal Aid Society attorney as “anti-racist protesters,” were arrested and processed.

It was a sadly familiar scene. These violent spasms occur with grim regularity now. Right-wing proto-fascist elements coming to blows with left-wing socialist demonstrators is a fact of our politics. In Chicago, Sacramento, Saint Paul, Berkeley, Portland, and elsewhere, the vicious and radicalized are playing at Weimar. If they are not careful, they might get what they’re looking for.

Much has been made in these pages and elsewhere of the institutional political media’s sympathy for one half of this detestable equation. The New York Times write up of these clashes described the counter-demonstrators as “anti-fascist” activists, a curious title to bestow upon a group that resorts to the political intimidation tactics of Mussolini’s Black Shirts. It is a lexical tell that showcases the ideological homogeneity within professional media reminiscent of the ubiquitous notion that the Antifa demonstrators who faced off against white supremacists in Charlottesville were the moral heirs to the Boys of Pointe du Hoc. Only after Antifa began attacking journalists did the soundness of this appraisal get a critical once over.

But liberal hypocrisy does not excuse conservative hypocrisy, and there’s enough of that to go around.

What value did this intellectual Republican institution hope to impart by hosting an accomplished provocateur—a man who has repeatedly insisted that “fighting solves everything,” that Israelis have a “whiny, paranoid fear of Nazis,” and that the starvation of millions of Ukrainians under Stalin was the work of “commie, socialist Jews?” Surely the Metropolitan Republican Club is aware that McInnes’s following has been implicated in the incitement of violence before. They must know that this group not only courts controversy but also attracts an unhinged response from the maniacs who fill the ranks of Antifa. In fact, that was most likely this act’s biggest draw.

We’ve seen this before. On college campuses, the local student-led political establishment is increasingly drawn to firebrands and agitators, not because of their challenging insights, but because they have the unique capacity to drive their untethered political opponents to fits of self-destructive rage. We’ve even seen it, writ large, in Virginia, where the GOP’s U.S. Senate candidate, Corey Stewart, is a Confederate apologist whose antics thrill the rank and file but are turning this once reliably red state a shade of dark blue.

There is some instrumental utility in transforming your adversary into a frothing bedlamite if only to present yourself as a calm and rational alternative. But no one with any coherent political philosophy believes that Milo Yiannopoulos is a great intellect because he inspires his detractors to set their surroundings on fire. No one of value believes that Stewart is onto something because the people who are offended by his frequent appeals to unalloyed racism are passionate about it. This is provocation for provocation’s sake, but it is not a sign of strength. It is the language of the fearful.

There’s a through-line that connects Manhattan’s Upper Eastside, the average college campus, and the state of Virginia. For Republicans, it is increasing irrelevance. In these places, they see their power wasting away, and they’re appropriately terrified. The provocation and incitement to which they gravitate isn’t just an attempt to recapture some lost attention, though that is surely the primary conscious drive. The radicalism to which they are attracted mirrors their anxieties.

For fringe factions on the right and the left, incitement and violence has become the weapon of first resort. Incidents of political violence are still few and far between, but we’re getting more accustomed to them. It’s just another part of the political landscape. That is the precipice of the abyss. And we’re staring right into it. 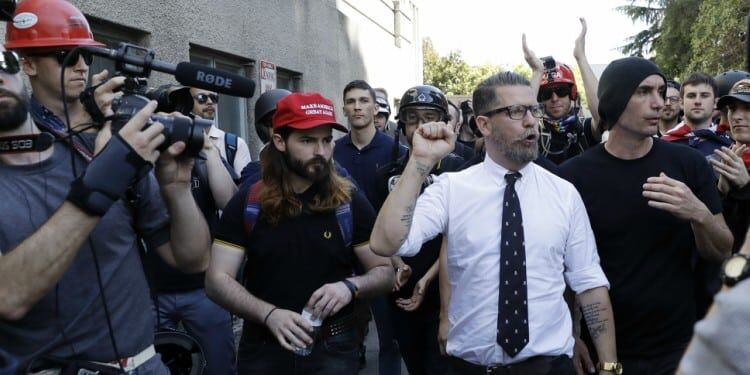