“Consequential, but dull.” That’s how Reuters reporters characterized the first day of public impeachment hearings, and they weren’t alone. “It was substantive,” NBC News observed, “but it wasn’t dramatic.” For partisan liberals, appraising the solemn rite of impeachment as though it was a very special episode of “Real Housewives” conveyed only the frivolity of the press. Clearly, though, House Democrats also want to see a little more “pizazz” in these proceedings, if only to hold the attention of the viewing audience. The substantive allegations against the president just aren’t doing the trick.

The Washington Post’s reporters recently observed a distinct shift in how Democrats have begun to talk about the claim that President Trump leveraged his power and contravened the will of Congress to compel Ukraine to announce the commencement of investigations into his domestic adversaries. No longer are House Democrats using the phrase “quid pro quo” as shorthand for the scandal. Instead, Democrats like Nancy Pelosi are describing what they’ve uncovered as “evidence of bribery.” Even if “bribery” does not accurately summarize the claims against Trump, Democrat Rep. Jim Himes said on NBC’s “Meet the Press,” it is a more effective way to communicate the claims against Trump than using “Latin words.”

This subtle shift is not attributable to new revelations uncovered by House investigators but by Democrats’ discovery that voters are nonplused by the proceedings. As the Post revealed, this rhetorical transition followed message testing with focus groups in battleground districts, in which voters responded with more revulsion toward the word “bribery” than “quid pro quo” or even “extortion.” Moreover, “bribery” has the added benefit of reflecting the language in the Constitution pertaining to offenses that merit a remedy for presidential corruption as extraordinary as impeachment and removal from office.

There are two problems with this. First, “bribery” does not describe what is alleged to have occurred here—at least, not from the president’s perspective. The offenses at issue center around the claim—one now supported by the testimony of a half-dozen current and former administration officials—that the president misused his authority to achieve a domestic political objective, subordinating U.S. interests in the process. In that effort, Trump withheld the disbursement of congressionally authorized financial and military assistance, which may have violated appropriations law.

Some have argued that, even if Trump’s actions fall short of the criminal definition of what constitutes “bribery,” the Constitution does not explicitly define the term. After all, the Founders might have viewed that which the president sought to extract for himself from Ukraine as a material benefit. But the phrase “high Crimes and Misdemeanors” was appended onto “Treason and Bribery,” expanding the definition of what constitutes impeachable offenses to encompass a broader array of corrupt activities that stop short of simple “maladministration.” In other words, Congress would know an impeachable offense when it saw one, and it has the authority to define such offenses broadly. The Constitution is not the obstacle before Democrats; voters are.

And therein lies the second problem for Democrats. The president’s opponents have insisted that theirs is a somber duty, and they would go only where the facts led them. Thus far, the facts have led them in a direction that apparently does not sufficiently titillate voters in battleground House districts. That doesn’t speak to the gravity of the charges against Trump but the conscientiousness of voters. By message testing the themes surrounding impeachment and shaping their rhetorical strategy to most excite voters’ passions, Democrats have given their Republican critics ample ammunition to claim these proceedings are less about good governance than the pursuit of political advantage.

Impeachment is a political process. Like any such process, it will require broad public support if it is to be successful. To that end, Democrats are obliged to determine what course of action plays best with a critical mass of voters, but not at the expense of the facts of the case before House investigators. The language Democrats are now endorsing doesn’t clarify so much as confuse the allegations against the president. More damningly, it suggests to persuadable observers that the facts as we understand them are insufficient to produce the outcome Democrats would like to see from impeachment proceedings. 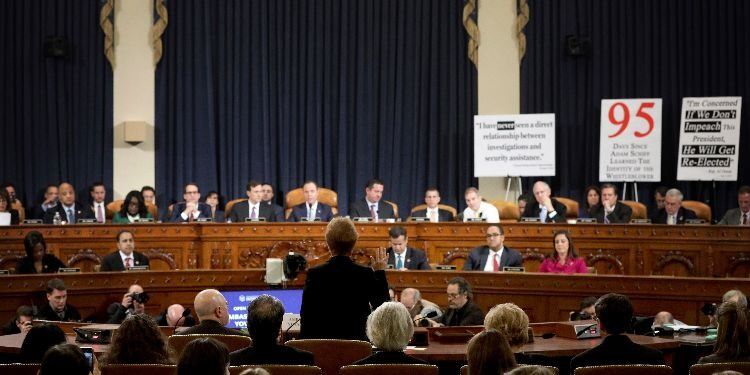