Donald Trump uncovered an underserved segment of the American electorate, one hostile toward the GOP’s rigid fiscal austerity but amenable to the Republican Party’s cultural grievances. Subordinate the former to the latter, his candidacy seemed to confirm, and you have yourself a winning coalition. The challenge before politicians catering to this voting bloc is how to do it while preserving intellectual consistency. As Sen. Marco Rubio demonstrated, that’s an obstacle that is not so easily overcome.

This week, Florida’s senior senator delivered an address at the Catholic University of America entitled “Catholic Social Doctrine and the Dignity of Work.” Modeled on an essay the senator published in the journal First Things, Rubio evoked increasingly familiar themes on the right about the inherently flawed aspects of the modern economy and its supposedly destructive effects on community and the family. His speech began with an invocation of Pope Leo XIII’s 1891 encyclical Rerum Novarum, which the senator noted was delivered against a backdrop of economic upheaval, social discord, and rising popular discontent with laissez-faire markets and governments.

“The economy that he described 130-years-ago as the right response was one in which workers and businesses are not competitors fighting with each other for their limited share of limited resources,” Rubio said. “It’s an economy in which workers and employers are partners in an effort that ends up benefiting both of them and, as a byproduct, strengthens the whole country.”

Rubio’s invocation of Rerum Novarum is philosophically ominous. The ecclesiastical and the theological currents that yielded Pope Leo’s address feature prominently in my book, Unjust: Social Justice and the Unmaking of America. The modern social justice movement was forged in Rerum Novarum, and with it many of the movement’s excesses and mistakes.

Among the Jesuit philosophers instrumental in developing and influencing the strain of thought that culminated in Rerum Novarum was Luigi Taparelli d’Azeglio. It’s no coincidence that he was among the first to use the term “social justice” in a context compatible with its modern definition. His theory of social harmony existed in conflict with Lockean ideals that so influenced America’s founding generation. He saw the 19th Century economy as “a war of all against all,” and the Enlightenment’s conception of liberty as tyranny by another name.

Rerum Novarum became an essential text for those suspicious of Enlightenment ideals while being hostile toward socialist policy prescriptions. While the encyclical nodded toward the right to property ownership in opposition to Marxian ideals, it nevertheless argued that the popular demand for socialistic policies would not abate unless the state intervenes more forcefully into what were previously private spheres of modern life. Upon this foundation, men like John Rawls built a modern theory of social justice, in which bureaucratic operators are empowered to distribute society’s benefits.

These were big ideas at the dawn of the Progressive Age, but their relevance today is questionable. For evidence, look no further than the relative smallness of Rubio’s speech.

The senator insists that “we have been left with an economy and a society no one is happy with,” but his prescription is to incentivize businesses to use “profits productively for the benefit of the workers and the society that made it possible.” That sounds good, but it’s hot air. Capital investments that are explicitly designed only to increase an individual firm’s productivity and profits nonetheless yield indirect benefits for society as a whole. Those investments create more opportunities for employment, broadening and deepening prosperity by providing the employed with capital that they use to patronize other businesses, pay taxes, and contribute to charities.

Presumably, the levers Rubio would use to induce businesses to make long-term investments are the sort to which Donald Trump has already appealed. Indeed, the kind of economic meddling in which the president is engaged created the very uncertainties that have led businesses to hold off on making long-term capital investments.

Rubio contends that the tax code also discourages those kinds of investments in favor of stock buybacks, which benefit the wealthy more than most average Americans. Fair enough, but the incentive structures in the tax code are distinct from those of the marketplace. Rubio’s “Common Good Capitalism” diagnoses the economic distorting effects of public policy correctly—and then prescribes more distortions as their remedy.

Rubio further contends that the globalized marketplace has yielded unnatural benefits to China, which can easily outcompete the American labor market. This dynamic has become a national security risk. He’s right about that. American private and public enterprises have been burned by the People’s Republic’s capacity to use cheap technological exports to undermine U.S. information security. And yet the example Rubio uses to illustrate this threat—the rare-earth minerals mined in China that have national security applications—is unconvincing.

For example, a Chinese effort to cut off exports of rare-earth minerals to Japan during a 2010 diplomatic dispute had little effect. What’s more, American production mines that went dormant amid pressure from their Chinese competitors are back in operation and, in less than a year, now account for one-tenth the world’s rare-earth mineral production. In a stunning reversal, China has recently begun importing semi-processed rare-earth ore from the United States. All of this was achieved even in the absence of Rubio-sponsored legislation mandating the establishment of a “Rare Earth Refinery Cooperative.”

The Florida senator later cites the deference of U.S. commercial enterprises to Chinese interests as an example of where “pure market principles and our national interest are not aligned.” That’s arguably true, but combatting Chinese influence by adopting its methods of controlling the market and protecting domestic industry will prove unproductive. Rubio appears to resent how Beijing has used “subsidies and protectionism” to undermine America’s domestic strategic interests, but these are the same tools lawmakers like Rubio who object to the “outsourcing of industries like manufacturing” will be tempted to use. And exactly how broad is the constituency that would benefit from such a scheme compared to the universe of American consumers and producers who suffer under such a regime?

Rubio maintains that federal grants to “small business manufacturers instead of lifeless corporate conglomerates” are essential to his vision. He should be thrilled then that American small businesses are proliferating not in response to federal mandates or incentives but a growing economy that can support them. The manufacturing sector to which Rubio devotes so much of his focus accounts for just 10 percent of American economic activity and has recently entered a recessionary phase. That’s partly due to the president’s antagonistic trade policies but also rising labor costs, which have increased in response to the scarcity of skilled workers (e.g., a strong job market). This is not a great problem for the nation to have, but it’s not a bad one either.

Rubio insists that the modern age has put undue strain on parents, few of whom can afford the cost of childcare and are estranged from their families due to increased economic burdens. Once again, that’s likely true, but Rubio would seek to reverse this trend through… expanded child tax credits. Somehow the solution does not seem proportionate to the problem.

If we are to take Rubio and the Pope who influenced him at their words, the senator wishes to reorient the American economy around protectionist impulses it sloughed off at the end of the 20th Century to dampen the appeal of socialism. But quite unlike the age of revolutions in which Pope Leo XIII wrote, the allure of socialism in America today is extremely narrow. Rubio’s complicated vision begins with an articulation of a philosophy hostile toward the liberal ideals of the Enlightenment only to come around to the virtue of those ideals when compared to those espoused by Chinese autocrats.

Rubio concludes by noting that the United States is entering a period of sustained conflict with its “near-peer competitor” in China. That competition, he contends, will demand of us the kind of imaginative thinking the senator practices in advocating “Common Good Capitalism.” Beijing’s model is one “in which the principles of freedom of religion and speech are replaced by what they call ‘societal harmony,’” Rubio notes, but in which “harmony” is enforced by a totalitarian police state.

The American model, by contrast, is on its face disorderly, fragmented, and fractious.

In other words, free. 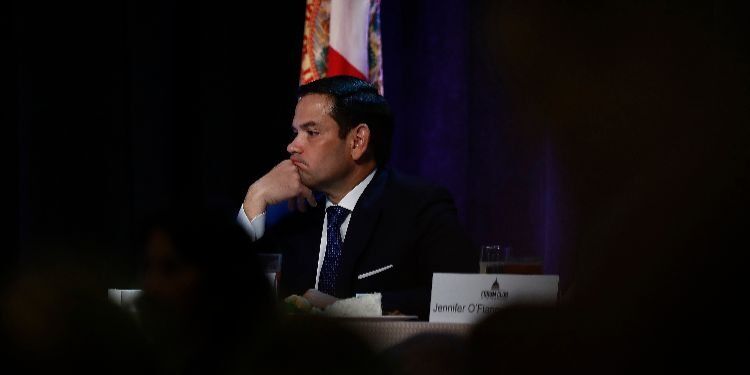