Beto O’Rourke once again demonstrated why his nascent presidential campaign is struggling this week when he eagerly repeated Joe Biden’s biggest mistake of the 2020 election cycle. Asked last week if he would choose a woman to join him on the ticket if he won his party’s nomination, O’Rourke said that he would. “Stacey Abrams comes to mind for me right now,” the former Texas congressman said. Abrams did not even have to rebuff this gesture as she did so ungraciously when Biden floated this prospect. Her sympathizers have rejected the overture on her behalf.

“It’s insulting to Stacey Abrams for, you know, white guys, essentially, to get up there and say they want to make her their human shield,” said Washington Post national political correspondent Karen Tumulty. “It really is insulting to Stacey Abrams.” It’s not entirely clear why it is offensive to be considered vice presidential material at this stage of the race when no one has voted and absent the extensive vetting process to which potential presidential running mates are subjected. Given that the highest public office Abrams has ever occupied has been that of minority leader in Georgia’s House of Representatives, some might even consider this level of attention complimentary.

Indeed, O’Rourke probably feels a bit blindsided by the criticism he’s faced. Vice president would be a promotion in the hypothetical Beto administration from the original role he had considered for Abrams: voter suppression czar. Abrams maintains that she was a victim of illegitimate efforts to undermine her support at the polls, but that assertion has since evolved into the much more egregious charge that she is the rightful governor of Georgia.

“I’m here to tell you a secret that makes Breitbart and Tucker Carlson go crazy: We won,” Abrams recently told supporters, demonstrating a Trumpian penchant to engage in provocation for its own sake. Abrams has labeled the usurper Georgia Gov. Brian Kemp the “architect of voter suppression” and called on her fellow Democrats to abstain from conceding races they “lose” at the polls. “We don’t have to concede elections anymore because, when we concede, we are condoning systems that are used to oppress us,” she said.

We don’t have to guess at how dangerous this assault on the legitimacy of the electoral process is. Political scientists and Democratic politicians told us as much themselves when Donald Trump was doing the assaulting. “To a political scientist who studies authoritarianism, it’s a shock,” Harvard Professor Steven Levitsky said of politicians who question the validity of the vote absent supporting evidence. Barnard College’s Sheri Berman agreed. To haphazardly call elections rigged is to “fundamentally threaten what the people actually want.” “He is denigrating— he is talking down our democracy,” Hillary Clinton said of her opponent in 2016. Some even speculated that Trump was inviting violent insurrection with his preemptive efforts to discredit the election.

Even after Trump won, he continued to question the legitimacy of the election results in states he lost. “The media were indeed ‘ignoring’ his claims—because there was no evidence for them,” The Atlantic’s David Graham wrote. Abrams hasn’t cleared any greater evidentiary threshold—she has even acknowledged that she has “no empirical evidence that I would have achieved a higher number of votes” than Kemp. But she has not received the Trump treatment in the press.

Abrams’s allies blame Kemp, the former secretary of state, for the over 200 voting precincts that have closed around the state since 2012, but those decisions are made at a local level and upheld by the state’s supreme court. Kemp even opposed some of those more controversial closures. Abrams and company claim that Georgia’s voter identification requirements and the state’s regular purge of the voter rolls laws disenfranchise voters, but those laws have been upheld as constitutional precisely because voters who may be accidentally swept up are also given the opportunity to cast provisional or even standard ballots. The Abrams campaign initially planned to sue the state to ensure that all of the state’s rejected ballots were counted, but that only ever amounted to about 5,000 ballots.

In the months that elapsed since Kemp won a 56,000-vote victory, his lead has shrunk by just about 2,000 votes. Despite a 16-point surge in the number of African American voters in Georgia in 2018 compared to 2014 (part of an across-the-board increase in voter participation in last year’s midterm elections), Brian Kemp still won by a margin far larger than any recount has ever overturned. “Georgia is one of the few states where black voter turnout exceeded white voter turnout in 2018,” Brookings Institution Senior Fellow William H. Frey observed. “Moreover, its 2018 black voter turnout of 60 percent exceeded its turnout in the 2016 presidential election by 1 percent.” If there was a conspiracy to suppress the black vote in Georgia, it was spectacularly inept.

None of this appears to bother Abrams or her boosters. “I was actually told I couldn’t vote for myself,” Abrams recently alleged. She added that the only reason why she was able to cast a vote in her home state was the presence of the news media who helped her “force” her way into the booth (a confrontation you would think the news media would eagerly broadcast). “If we do not secure our democracy and ensure that every vote counts in 2020,” she concluded, “we will be having a very different conversation, possibly in Russian, in 2030.”

This is as embarrassing and reckless as Trump’s unsubstantiated attacks on the democratic process. Between her disregard for evidence, her embrace of a victimization narrative, the delight she takes in “owning the cons,” and her willingness to undermine electoral integrity for personal gain, maybe Abrams really is cut out to be president. 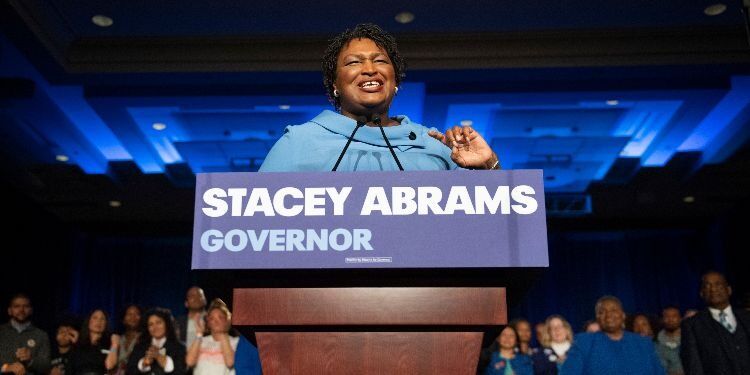