A titanic clash is upon us. At least, that’s what we’re told.

An increasingly popular theory maintains that the Republican nominating contest will eventually weed out the inexplicably ascendant gatecrasher candidates and yield two finalists, Senators Ted Cruz and Marco Rubio. That race, political prognosticators contend, is coming into focus. The best evidence so far in support of this hypothesis occurred on Thursday when Cruz and Rubio began trading barbs and litigating the others record on the wedge issue that has so defined the Republican presidential primary race so far: immigration. While the distinctions between these two politicians on that issue are grand and defining for partisans, they are modest indeed to outside observers. What’s more, the arguments that both candidates are making were long ago settled; the impressions they seek to make already baked in for Republican primary voters’ evaluating these candidates.

As much as partisans in the long-fought immigration wars might resent the fact, both Cruz and Rubio are engaged in a battle to revise history. At the heart of this is a divisive feud over the 2013 comprehensive immigration reform bill co-sponsored by Rubio. This squabble is a perfect illustration of why it has traditionally been so difficult for U.S. Senators to win their party’s presidential nomination (2008 was the first time in American history that two sitting senators faced one another in a general election). Senators are asked to take divisive votes on legislation that inevitably has been shaped and crafted by their opponents, a sausage-making process of compromise that alienates the ideologically purist activist classes. As was the case with Barack Obama, and as might be the case with both Cruz and Rubio, their unique talents and characters, not to mention the extraordinary nature of the moment, might overcome these obstacles. But they must first make their pitch to voters, and the immigration issue is its own special torment for both candidates.

What might be Rubio’s single most potent weakness among Republicans is his vocal support for the comprehensive reform bill that ultimately failed. Democrats know it, too. “Winter is coming for Rubio on immigration,” hoped Hillary Clinton campaign press secretary Brian Fallon. “I am surprised there is not a bigger debate in the GOP primary about Rubio working closely with Harry Reid to pass Obama’s immigration plan,” CNN contributor and former advisor to Barack Obama, Dan Pfeiffer, observed with the intention of guiding his fellows in media toward a rather clear conclusion. They have the added advantage of being correct. As the Washington Examiner’s Byron York noted, Rubio has been fortunate to avoid questions about his signature struggle in the Senate, but that luck won’t last forever.

York’s review of the Gang of Eight bill crystallizes why a subset of the Republican electorate regards Rubio as a hopelessly tainted candidate. His bill would have invited more immigration, provided pathways to both legal status and citizenship for most of the nation’s illegal population, did not make border security a top priority, provided carve outs for some illegal aliens convicted of misdemeanor crimes, and was replete with rewards for special interests. For the party’s populist wing, the bill was anathema.

Now, Rubio is seeking to get right with a GOP base that has made it plain in their support for Donald Trump that immigration reform of the variety proposed in 2013 is a deal breaker. The Florida senator contends now that he would phase out Barack Obama’s “Deferred Action for Childhood Arrivals” program, or DACA, inviting the rebuke of moderate voices like those on the Washington Post’s editorial board.

For his part, Ted Cruz has staked out a position as a realistic but nevertheless aggressive immigration hardliner, but he is seeking to thread a needle that Rubio is making progressively narrower. The Florida senator reminded the press on Thursday that his colleague from Texas supported not only legalization for illegal immigrants in that bill, opposing only a pathway to citizenship, but he introduced an amendment to that effect. “The effect would be that those 11 million [illegal immigrants] under this current bill would still be eligible for RPI [Registered Provisional Immigrant] status,” Cruz said in support of his amendment in 2013. “They would still be eligible for legal status, and, indeed, under the terms of the bill, they would still be eligible for LPR [Lawful Permanent Resident] status as well, so that they are out of the shadows.” Rubio further noted that, like him, Cruz supports a dramatic increase in the number of temporary work visas for skilled workers.

Cruz’s defenders bristled at the notion that their candidate supported the Gang of Eight reform bill and have contended that this amendment wasn’t submitted in order to make the bill more feasible but to kill it. That kind of convoluted, process-heavy argument is precisely the kind of contention Cruz, who is forever steeped in strategy and gamesmanship, would make. In 2013, though, the first-year Texas senator was by no means the outspoken critic of the bill’s objectives that he is today. At the time, his opposition was tepid and qualified. While he opposed the pathway to citizenship, he also steadfastly refused to call legal status he supported for the nation’s illegal immigrants “amnesty” – a word that, despite its ubiquity, has lost all association with its dictionary definition.

In the end, this revisionism and nuance matter little. To the extent that the Gang of Eight bill is relevant, it is in the fact that Ted Cruz voted against it while Marco Rubio voted for it. If the issue moves votes, that’s what will move them. For the subset of Republican primary voters for whom a hardline position immigration is sine qua non, their impression of the two senators vis-à-vis the Gang of Eight bill was cemented long ago.

The modest distinctions between Rubio and Cruz’s position on immigration were more evident before the issue exploded the GOP primary race. In February, Bloomberg’s Ramesh Ponnuru noted that the issue of immigration was simmering just beneath the surface of the nascent GOP primary race, but the race’s candidates hadn’t seemed to notice. All of the GOP’s likely presidential aspirants shared a broad understanding on the need to reform the immigration system, which today serves as a family reunification program, and for enhanced border security. The schism between what the Center for Immigration Studies’ Mark Krikorian called “an elite versus the public issue” was blown wide open by the entry of Donald Trump into the race. Trump’s resonance with a fraction of Republican voters is due almost entirely to his hawkish immigration policy. Yes, there is an unattractive set of Trump backers who are particularly jazzed by the prospect of a revived “Operation Wetback,” a brutal 1950s-era deportation scheme that the celebrity candidate expressed support for on Tuesday night. But more of Trump’s supporters, those who don’t want to see a second Trail of Tears, are just happy to have their concerns about the displacing effects of both legal and illegal immigrants addressed. Which is why both Rubio and Cruz’s efforts to appeal to hardliners may be misguided; Trump will always outbid them when it comes to hawkishness on immigration.

The distinctions between Cruz and Rubio on immigration make for an exciting news cycle, but those voters that prioritize that issue above all others have likely already formed a relatively firm opinion on both candidates. And while these insiders struggle to tarnish the other, the outsiders continue to defy political gravity with just weeks to go before the first votes are cast. 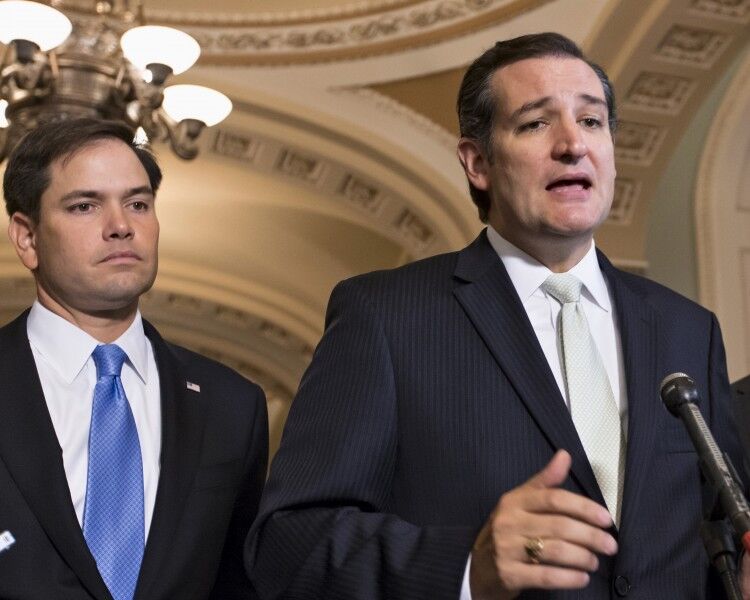