Today, three people are dead—killed in an act of discriminate violence. Their memories are done a disservice by the failure on the part of law enforcement to call the act of terroristic brutality by its name. By appearing to evade the obvious conclusion about the killer’s motives, authorities confirm some of the worst suspicions of an already suspicious nation.

There is no other way to accurately describe the actions of Fresno, California resident Kori Ali Muhammad other than to call them “terrorism.” According to police, Muhammad had a history of posting threatening messages and racist, anti-white screeds on social media. On Tuesday, he allegedly acted on those dark impulses.

Shouting Islamic slogans, Muhammad opened fire on civilians (two of whom were in the parking lot of a Catholic charity mission). Within 90 seconds, he shot and killed three people. He fired at, but missed, a fourth. All his targets were white. According to witnesses, Muhammad pointed a gun at three Hispanic women seated in a parked car—a woman and her two daughters—but declined to pull the trigger.

Muhammad, who was already wanted in connection with the “unprovoked” April 13 murder of a 25-year-old security guard and who was found to suffer from paranoid delusions in 2005 after an evaluation following a federal drug conviction, surrendered to police.

The aftermath of this attack should have been devoted to the memory of those killed. The nation should have been focused on the policies that allowed a man with a history of mental disturbance, known to both authorities and associates as a potential danger, to be left unmonitored. Instead, the nation was forced to endure the Fresno Police Department’s efforts to sanitize the bloody event lest the nation conclude this was an act of Islamist terrorism.

“We do not believe… that this is a terrorist-related crime,” insisted Fresno Police Chief Jerry Dyer. “This is solely based on race.” Perhaps unaware of the dictionary definition of terrorism, Dyer asserted that Muhammad shouted “God is Great” in Arabic before specifically targeting and killing white people for death. Wrestling with the Fresno PD’s equivocations, the Associated Press summed up Dyer’s assertions with some unintentional gallows humor. “Fresno police chief: Shooting not connected to terrorism; suspect wanted to kill as many people as possible,” read one AP dispatch.

The acts of a murderous madman clearly influenced by Islam, a man who sought to pile up as many random white bodies as possible, sure seems to fit the common-sense description of terrorism. But some might argue that it fails to meet the legal definition. “You may not want to destroy the white man’s world, but we still do,” asserted Muhammad in a video he posted to social media. To any reasonable person, this establishes a desire to “use force or violence” “in furtherance of political or social objectives” or to “intimidate or coerce a civilian population.”

The Fresno police have a legitimate reason to be coy about accusing Muhammad of terrorism. Those reasons are no doubt similar to those that prevented prosecutors from seeking terrorism charges against Dylann Roof, a white supremacist who murdered nine African-American parishioners in a South Carolina church in 2015. Alleging a “hate crime” allows prosecutors to seek terrorism-related penalties while not having to prove terroristic motivations in a courtroom (though the Justice Department did investigate whether Roof’s actions constituted an act of “domestic terrorism”).

These legal distinctions were lost in the frenzied atmosphere of the American media environment at the time. A substantial number of American influencers insisted it would only be just to unreservedly dub Roof a terrorist, if only for the sake of moral clarity. At the time, there were plenty of essays criticizing the press and law enforcement for failing to dub Roof a terrorist. Some pretended as though there was a reticence on the part of conservatives to assume Roof had terroristic motives, despite the fact that no evidence existed to support their petty and partisan conclusion. There was no shortage of public policy advocates, commentators, and columnists on both sides of the political divide who enthusiastically dubbed Roof a “terrorist.”

What followed Roof’s attack was a national spasm of grief. It was, in retrospect, a productive exercise marked by the overdue furling of the Confederate battle flag from South Carolina’s public grounds and an effort to decommission Civil War-era monuments commemorating Rebel veterans. The key distinction between the responses to Roof case and Muhammad’s is not legal or even moral, but one of fear.

The Confederacy is dead and gone. The ethno-supremacist regimes of Central Europe and Southern Africa that plagued the 20th century long ago joined it on history’s ash heap. White supremacy and white nationalism remain a stain on the American psyche, but these are not ideologies in ascendance. White supremacists cannot lay claim to a state. There are no writers or cartoonists who avoid offending white racists for fear of violent reprisals. We can’t say the same in the case of Islamist terrorism. Muhammad’s mental instability renders him difficult to classify, but his belief in a curious sect of Americanized Islam and his adherence to Islamist sloganeering suggests a familiar scourge is behind the bloodshed in Fresno. Unlike the brigade of basement-dwelling white nationalists populating Reddit, Muhammad’s is an ideology with teeth.

Even if some could contend that law enforcement officers have an obligation to be vague about the nature of this terrorist event, no such excuse exists for politicians or professional pontificators. There is no simple solution for the problem of domestic terrorism committed in the name of radical Islam. Closing the borders won’t resolve the problem. Nor will refusing to call Islamist militancy by its name. As we ponder this conundrum, the danger metastasizes. It is ever-present, foreign-directed and/or inspired, and it is hiding in plain sight. Refusing to call terrorism “terrorism” doesn’t make it go away. Such cowardice will only leave us less prepared to confront the threat. 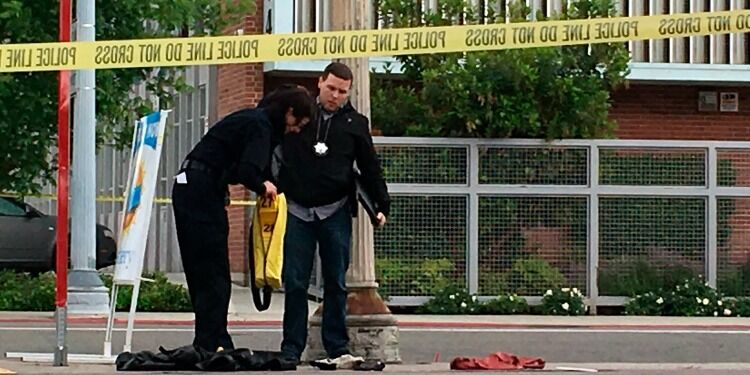