Where does legitimate and objective criticism of Israel end and anti-Semitism begin? The line isn’t an especially fine one, but the boundary does seem to confound those who regularly cross it. At least, that’s their face-saving claim. Few are supposedly clumsier at navigating this divide than Reps. Rashida Tlaib and Ilhan Omar. Their defenders insist that these congresswomen are being singled out only by those who decline to distinguish critiques of the Jewish state from attacks on Jews. But these representatives have erred in precisely the same way too many times for their statements and actions to be coincidental.

The effort to expose Rep. Omar’s anti-Semitic comments is made easier by the fact that she’s admitted to and apologized for some of them. “Israel has hypnotized the world,” the congresswoman wrote in 2012 amid Israeli strikes on Hamas targets in the Gaza Strip. “May Allah awaken the people and help them see the evil doings of Israel.” Thus, Omar gave voice to an ancient libel that brands Jews manipulative, seductive, mesmeric, and duplicitous. The comments dovetailed with a 2013 interview Omar gave to an Arab-American television host blaming American and Israeli actions for generating a response that included the targeting of civilians in terroristic attacks. Far from being reflexively condemned by American supporters of Israel, Omar was gently corrected and provided a platform to express her views and engage with her critics. Omar conceded her statement included an “anti-Semitic trope,” which was “unfortunate and offensive.” For a time, there was hope that the new congresswoman would grow in office, but this faith was misplaced.

Omar found herself again in the dock when her fellow Democratic members of Congress joined with her critics on the right to condemn a tweet in which Omar claimed that American support for Israel is a product of Jewish money. When The Intercept’s Glenn Greenwald marveled over “how much time U.S. political leaders spend defending a foreign nation,” i.e., Israel, even at the expense of American civil liberties, Omar replied, “It’s all about the Benjamins, baby.” Facing bipartisan pressure, she once again relented. She thanked her “Jewish allies and colleagues who are educating me on the painful history of anti-Semitic tropes.” And though she apologized “unequivocally,” Omar insisted in the same statement that she would continue to speak out against the influence of pro-Israeli lobbyists (raising doubts about her familiarity with the definition of the word “unequivocally”).

Omar profited from the benefit of the doubt, but that kindness, too, was misplaced. The congresswoman avoided expressing her support for the superficially anti-Israel but substantively anti-Semitic Boycott, Divestment, Sanctions (BDS) movement during her 2018 campaign for Congress, only to enthusiastically endorse it after her election. This betrays a level of sophistication and comprehension about, at the very least, the political consequences she might suffer as a result of her convictions.

If Omar benefited from the instruction she had received about what constitutes anti-Semitism, she was careful not to show it. “I want to talk about the political influence in this country that says it is OK to push for allegiance to a foreign country,” Omar told a friendly audience in Washington D.C. Once again, Omar was asked to repent for insisting that Israeli influence in America amounts to a foreign conspiracy, but she was done apologizing. Without any recourse, Omar’s fellow Democrats in the House introduced a resolution condemning the anti-Semitism their colleague regularly evinces. Amid a bitter internal debate, not over the nature of her comments but the political impact of singling out the representative for censure, Democrats scrapped the resolution in favor of a blander, generalized attack on hate in all its various forms.

For all the assurance from her reflexive defenders, the debate around Omar’s comments is not about whether the things she says are anti-Semitic but about the extent to which they merit condemnation. Omar’s comrade-in-arms, Rep. Rashida Tlaib, has a similar problem.

The Michigan congresswoman’s term in the lower chamber of Congress began inauspiciously enough when she said her Republican colleagues who opposed BDS “forgot what country they represent.” The notion that mounting a defense of Israel’s right to exist constitutes a display of dual loyalty is yet another road-worn anti-Semitic slur. But unlike Omar, Tlaib was not amenable to a fuller education on the subject.

The weeks that followed demonstrated why Tlaib was perhaps wise to withhold a dishonest apology for her remarks. Tlaib was later embroiled in controversy when she posed for a photograph with and attended private functions alongside executive director of the U.S.-based Palestine Right to Return Coalition, Abbas Hamideh, who had equated Zionism with Nazism and insisted that Israel’s existence is a “crime.” Was this a judgment lapse? It seems unlikely given the congresswoman’s connection to friend and top campaign fundraiser Maher Abdel-qader, a pro-Palestinian activist who engaged in Holocaust denial and accused American congressional representatives of being Israeli agents. Tlaib insisted that it is “unfair to be held responsible for the statements of others,” but this is a standard that cannot be applied to a pattern of similar associations.

Tlaib found herself in a scandal again when she confessed to being overcome by “a calming feeling” “when I think of the Holocaust” because the congresswoman’s Palestinian ancestors “provided” Jews a homeland where they could escape the persecution they faced in Europe. This is, of course, a blatantly ahistorical narrative. In fact, British Palestine was plagued by violence even before the 1917 Balfour Declaration, establishing a “national home for the Jewish people” in Palestine, and culminated in the Israeli war for independence, which erupted immediately after the United Nations adopted a partition plan.

Despite the backlash, neither Omar nor Tlaib have shown any willingness to pare back their anti-Semitic agitation. When Israel made the arguably ill-advised decision to invoke the country’s new anti-BDS law to bar the congresswomen from visiting the Jewish state, Jerusalem did so on the unassailable legal grounds that the organization sponsoring their trip was viciously anti-Semitic. That organization, Miftah, accused Jews of consuming “the blood of Christians,” has published neo-Nazi screeds, and has celebrated murderous terrorist attacks targeting children. To protest their treatment by the Israeli government, the two congresswomen shared a cartoon drawn by Carlos Latuff, a draughtsman who placed in Iran’s 2006 International Holocaust Cartoon Contest. The two congresswomen have regularly claimed that Israel’s character as a Jewish state is incompatible with representative democratic governance, likened Israel to Nazi Germany, and compared the Hamas-linked BDS movement to the Boston Tea Party.

Through it all, Omar and Tlaib were described in the press not as outliers but leading indicators of a sea change in the Democratic Party’s outlook toward Israel. They are the vanguard of a generation challenging old Democratic nostrums along the “uncomfortable intersection of race, gender, and religion.” They are “changing the conversation” about America’s relationship with Israel, igniting a hostile response “in particular from Republicans eager to exploit divisions in the Democratic Party.” Such a pronouncement is akin to suggesting that Rep. Steve King is “changing the conversation” around America’s relationship with white nationalism when his racist claims generate only censure and opprobrium from conscientious custodians of American national comity.

The only thing that saves Reps. Omar Tlaib and Rashida Tlaib from the universal reproach they are due is the plausibility of the claim that their displays of anti-Semitism are unconscious. But the preponderance of evidence suggests that they know exactly what they are saying and why. Those who continue to defend them probably do, too. 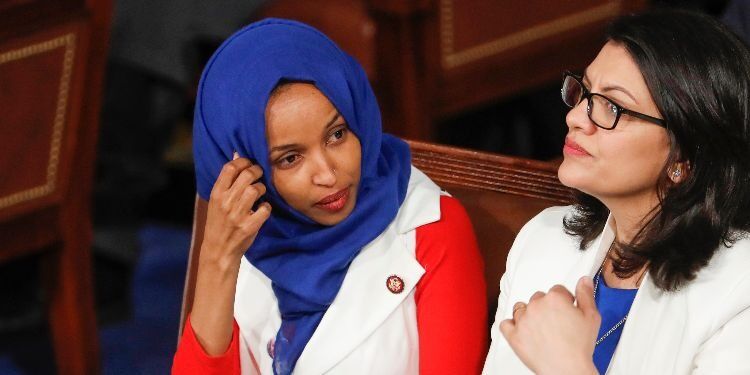