Democrats are finally digging out of the wreckage the Obama years wrought, and are beginning to acknowledge the woes they visited upon themselves with their box-checking identity liberalism. So, yes, the opposition is moving forward in the Trump area, but toward what? Schizophrenia, apparently.

The party’s rebranding effort began in earnest last week when Democrats revealed a new slogan meant to evoke an old one: “A Better Deal.” Writing for the New York Times opinion page on Monday, Senate Minority Leader Chuck Schumer insisted the Democratic Party’s new agenda “is not about expanding the government, or moving our party in one direction or another along the political spectrum.” Any sentient political observer could be forgiven for thinking otherwise.

“First, we’re going to increase people’s pay,” Schumer wrote. “Second, we’re going to reduce their everyday expenses. And third, we’re going to provide workers with the tools they need for the 21st-century economy.” He endorsed Bernie Sanders’ $1 trillion infrastructure spending proposal, a national paid family and sick leave program, and a hike of the minimum wage to $15 per hour. To reduce the cost of consumer goods, Democrats will pursue changes in the law to allow Congress to break up big firms with oppressive capriciousness.

When pressed on Sunday about what the “Better Deal” agenda may mean for health care, Schumer confessed it meant the most radical expansion of entitlement benefits in American history. “Medicare for people above 55 is on the table. A buy-in to Medicare is on the table. Buy-in to Medicaid is on the table,” the senator said. All options are available—including, apparently, a single-payer system in the form of voluntary Medicare-for-all—once Democrats “stabilize” ObamaCare’s insurance market.

Schumer admitted that the source of Democratic troubles in 2016 and since isn’t Moscow or former FBI Director James Comey; it’s that the electorate doesn’t know what values or beliefs his party represents. Connecticut Democratic Senator Chris Murphy agreed. “Our failing historically has been to focus on very targeted demographic messages, cultural issues, rather than broad-based economic themes,” he insisted. So the Democratic Party’s message in 2018 will apparently be not just big government but behemoth government. And yet, the faintest warble of Schumer’s conscience compelled him to assure voters that big government isn’t the Democratic objective. Why?

Because the way for Democrats to win involves party members farther to the Right—that faction of Democrats known as the Blue Dogs. “The [Democratic Congressional Campaign Committee] recognizes that the path to the majority is through the Blue Dogs,” asserted Arizona Rep.  Kyrsten Sinema. She told Politico that she is in talks with at least 20 potential candidates vying to revive this endangered species. “We are able to convince folks who normally wouldn’t vote for a Democrat to vote for this Democrat.”

Before voters purged moderate House Democrats by voting for Republicans instead in 2010, their eventual disappearance was heralded as a great victory for the Progressive Monolith. “Democrats aren’t ideological enough,” wrote Ari Berman in an October 2010 New York Times op-ed. He argued that ideological homogeneity would make Democrats “more united and more productive.” In fact, the 2010 midterm elections marked the end of the legislative phase of Barack Obama’s presidency. Good call there.

The House’s Blue Dog Coalition is “dedicated to pursuing fiscally-responsible policies, ensuring a strong national defense, and transcending party lines,” according to its mission statement. How those objectives comport with Schumer’s platform—cutting a 13-figure check for infrastructure, rampant economic interventionism, and a semi-single-payer system—is anyone’s guess. Democrats may plan on localizing individual races so as to shield their candidates from the party’s negatives, but that’s easier said than done. Just ask Jon Ossoff, who lost in a Georgia special election despite having done precisely this.

The party’s leaders seem aware that the kind of hyper-liberalism articulated in the “Better Deal” agenda is incompatible with the kind of “economic populism” that proposes individual frugality and prudence as well as solvent safety nets for those who need assistance. For all his faults, Trump was able to marry these two concepts in a way that appealed both to Republicans and enough swing Democrats to win the White House. Democrats appear to be appealing to centrists only at the point of a progressive bayonet. If Democratic candidates start winning again, it won’t be a result of their party’s coherent platform. 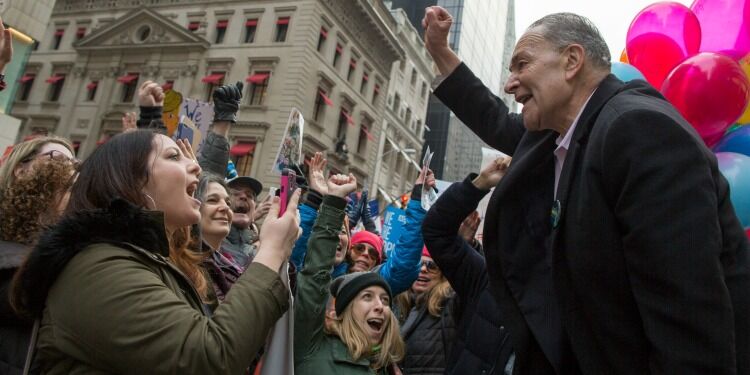 The Changing Story of the DNC Platform