I had thought there was a general consensus around the notion that Donald Trump’s extortion tactics were beyond the pale.

It was my impression we all understood that the president’s desire to make you wonder whether he would ensure a peaceful transfer of power if he loses the election was reckless and contemptuous. It doesn’t matter that the president’s term in office is defined in the Constitution. The capacity of America’s governing institutions to withstand this pressure from the president is beside the point. The point is: This is banana-republic stuff. It is a dangerous and, given that Mike Pence is in on the game, apparently strategic effort to radicalize the president’s core supporters amid a tense time in the nation’s political life. We should not accept it—and we have not. But the same cannot be said for Trump’s opponent, Joe Biden, who also appears to believe that blackmail is a savvy political strategy.

Both Biden and Kamala Harris have been conspicuously slippery when asked, as they have been repeatedly, whether they would support a congressional effort to “pack” the Supreme Court with pliant liberal justices if Republicans confirm Amy Coney Barrett to the bench before November 3. On Thursday, Biden made his plan as explicit as possible. “You’ll know my position on court-packing the day after the election,” Biden told reporters. To his credit, Biden was honest about the purpose of his evasion. “You know the moment I answer that question,” he continued, “the headline in every one of your papers will be about that.”

Well, yes, it would. Indeed, Biden has tacitly admitted here that to strike a definitive position on this threat is of profound interest to the voting public, as it should be.

We are not talking about just another legislative reform, akin to tinkering with marginal tax rates or even expanding the social safety net. Democrats are contemplating a fundamental alteration of the civic compact, which has obtained for 151 years. Such a proposal would doubtless require the elimination of the Senate’s legislative filibuster, sacrificing a minority privilege that has preserved the character of that deliberative body and has constrained its more heedless and ambitious members for the better part of two centuries. It would transform the Court into an instrument designed to advance Democratic political objectives, setting fire to the Court’s independence and its perceived legitimacy.

At least Franklin Delano Roosevelt, the last American president who sought to neutralize the powers wielded by an adversarial Court, had the decency to fabricate a pretext for his naked power grab. That attempt to pack the federal bench with new justices was predicated on his claim that the aged judges who had so frequently thwarted his legislative ambitions were just too overworked (by FDR, as it happens). His court-packing plan was pitched as a remedy for the judiciary’s dysfunction, but that pretense did not render his plan any less controversial. For the better part of six months, the maneuver dominated headlines across the country and flooded congressional offices with mail from outraged constituents. And in the end, despite the Democratic Party’s absolute majorities in both chambers of Congress, the plan went down to defeat.

By contrast, today’s Democrats haven’t even bothered to craft a cover story that would justify this usurpation. They have not said the court is dysfunctional or that confirming Barrett to the bench would alter the Court’s ideological balance because neither claim would be true. The more honest court-packing advocates simply affirm that Republican hypocrisy—the violation of a standard the GOP invented for itself in 2016 only to secure an advantage on the bench by blocking Merrick Garland’s appointment—was its own violation of the terms of engagement. Thus, there is nothing but their own unreciprocated and anarchic notions of propriety to stop them from transforming the Court into a rubber-stamp parallel legislature composed of lifetime appointees. That, too, is the stuff of banana republics.

The good news is that, like Trump, a hypothetical Biden administration would find it difficult to act on these threats. Any attempt to pack the courts and blow up the legislative filibuster in the process would consume the Biden presidency. It would be a Herculean task, blotting out the sun and making the act of legislating more conventional and incremental progressive reforms less likely. It would sideline and alienate the swing-state Democrats who could deliver their party into a new period of ascendancy. It’s an objective on which almost no Democratic office-seeker is presently campaigning. That is, in part, because court-packing is unpopular. But it is also because—just as Trump’s agitation cements the negative impression in voters’ minds that he is an agent of chaos—such a maneuver would reveal that the Democratic Party is not the vehicle for the restoration of normalcy and the observance of republican niceties that it claims to be.

There is no indication that Trump’s veiled threats have had a positive effect on his electoral fortunes, so it’s not clear what is motivating Democrats to adopt this same tactic beyond the pique that has clouded the judgment of their activist class. Democrats may be holding themselves hostage, but that doesn’t make their threats any less serious. Biden’s display is one of profound contempt for the electorate and disrespect for the authority he hopes to wield, and voters should be furious. To one degree or another, both campaigns have transformed this election into a shakedown. 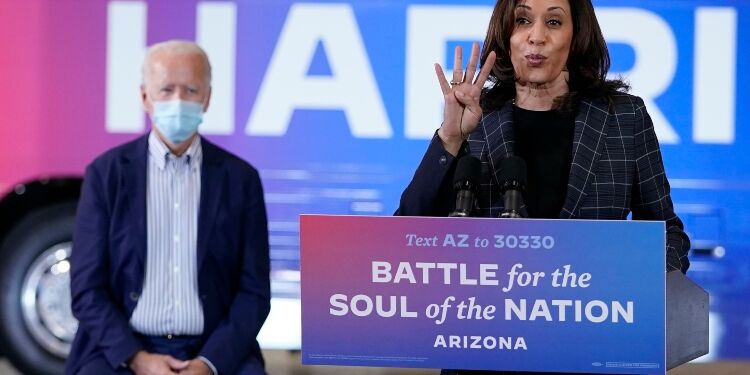