Upon reflection, it is not surprising that three particular Democratic presidential candidates are dominating in the polls of primary voters. Each has a compelling rationale for their candidacies.

Joe Biden is the former vice president and heir to Barack Obama’s legacy. As the runner up after the long 2016 primary campaign, Bernie Sanders can claim the right of primogeniture. Elizabeth Warren’s 2012 election signaled the ascension of progressive elements within the Democratic Party’s coalition.

As for the rest of the 2020 field—or, at least, those who were formidable enough to take the debate stage on Thursday night—the justification for their presidential bids is less clear. Candidates like Julian Castro and Cory Booker have geared their careers toward a run at the White House, and the trajectory was unalterable. For others, though, their campaigns have an origin story and an inception date. And even if these candidates had been laying the groundwork for a presidential campaign for some time, their moments in the national spotlight sealed the deal. In retrospect, they shouldn’t have.

Kamala Harris’s moment can be traced back to September of 2018, during Justice Brett Kavanaugh’s confirmation hearings. The California senator went “viral” after she pressed the Supreme Court nominee to “think of any laws that give the government power to make decisions about the male body” and grilled him over an alleged meeting he had taken with “President Trump’s personal lawyer.” Both exchanges were tense, laden with implication, and sent the political press into a frenzy. Harris’s “background as a seasoned prosecutor was on full display.” Her defiance positioned her as the leader of “a Democratic revolt.” “That’s when I started to hear people really talk about what a badass she is,” one influential Ohio Democratic organizer told Politico. Looking back on these moments, it’s not entirely clear why they should have mattered at all. Her inquiry involving the male body was a non-sequitur, and her mysterious line of questioning around a supposed meeting with Trump-affiliated attorneys came to nothing. But Harris had been laying the groundwork for a White House bid for some time, and this moment transformed her into a political celebrity.

Amy Klobuchar, too, can look back on the Kavanaugh confirmation hearings as the occasion when her presidential star began to rise, but for distinctly different reasons. In stark contrast to Harris’s leading questions, most of which led into a cul-de-sac, Klobuchar put Kavanaugh in a genuinely uncomfortable position when she asked if he had ever been drunk to the point of blacking out. “I don’t know,” he replied. “Have you?” It was a taut moment, one that did not reflect well on the justice, as his subsequent apology confirmed. Klobuchar’s dispassionate, genuinely prosecutorial demeanor not only put Kavanaugh on the back foot, it contributed to the sum of public knowledge about the nominee. Media and party insiders began to take notice of Klobuchar’s popularity in the battleground state she represents and her appeal among moderate, Midwestern voters. The logic of a 2020 bid based on those critical attributes soon became inescapable.

Pete Buttigieg’s moment took place when he first emerged on the national stage in 2017 amid an attempt to take control of the Democratic National Committee. A thoughtful intellectual with Midwestern appeal, a background in the armed services, and an identity that resonates with the party’s activist base, Buttigieg seemed the optimal figure to soften the Democratic Party’s caricatured image as elitist, technocratic, and coastal. “He very much is the future of the party,” said Los Angeles Mayor Eric Garcetti. “If you went into some laboratory to concoct a perfect Democratic candidate, you’d be hard-pressed to improve on Pete Buttigieg,” opened New York Times columnist Frank Bruni’s piece entitled “The First Gay President?” Barack Obama himself touted Buttigieg as one of a handful of figures who might soon take the reins of the party he once led. And while Buttigieg’s appeal among the Democratic donor class remains as strong as ever, his support from voters is decidedly narrower.

And then, there’s Beto O’Rourke. For the former Texas Congressman, his “moment” sprawled over the course of an entire campaign cycle. Politico’s Jack Shafer summarizes the frenzy:

“Is Beto O’Rourke the Left’s Obama-like Answer to Trump in 2020?” asked Vanity Fair. “Beto O’Rourke Could Be the Democrat Texas Has Been Waiting For,” offered BuzzFeed. Still more positive Beto coverage sprinkled the pages of Yahoo News, Time, GQ, Rolling Stone, the Guardian, the New York Times, Politico and Esquire as they worked off the same template. The Washington Post indulged Betomania with a feature, another feature, a column and the sort of ancillary coverage it ordinarily gives the Washington Redskins.

Quite unlike much of the 2020 field, though, this was not an organic eruption of admiration for O’Rourke’s political talent but a concerted effort to manufacture it. The evidence of its fabrication is apparent in how quickly the press transitioned from praising the congressman to scrutinizing him after he narrowly failed to unseat Ted Cruz. Nevertheless, the buzz around O’Rourke’s presidential ambitions would be hard for anyone to dismiss, let alone the subject of that acclaim. Only now, with the candidate flailing in the effort to generate traction among voters, has this outpouring of praise been definitively exposed as a theatrical production.

It takes months if not years to organize a campaign for the presidency, and no one embarks on such a monumental effort around a single news cycle. But it takes one or two such news cycles to prove the concept of a candidacy. The buzzy moments around these potential candidates catapulted them into the national consciousness and demonstrated their potential. In hindsight, though, they were only just that: moments. 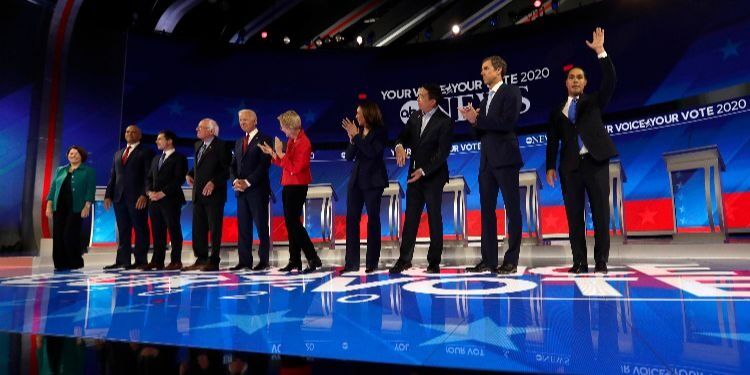