In her latest reinvention, Hillary Clinton has emerged from the woods transformed into a self-styled Cassandra. She travels from sound stage to sound stage, reminding the public that her 2016 loss was not her fault and the Russians who undid her once-promising political career are coming again. This newest reboot is remarkable if only for its extraordinary immodesty. Few have done so much to undermine the fortunes of their ostensible allies, but Hillary Clinton is not done yet. Her vendetta has now led her to sabotage the so-called “Resistance’s” last, best hope for cutting the legs out from under the Trump administration: Robert Mueller’s probe into the Trump campaign’s links to Russia.

Nearly ten months into his presidency, Donald Trump has not stopped campaigning against Hillary Clinton—a fact the Clinton surely appreciates if only for the otherwise undeserved relevance it bestows upon her. When asked about the Mueller probe and the charge that his campaign “colluded” with Moscow generally, Trump is fond of deflecting to the Clinton family’s dealings with Russian entities in both a private and governmental capacity. That distraction tends to inspire yawns and rolls of the eyes, but not today. On Tuesday, The Hill revealed that FBI and court documents allege that the Clintons, the Clinton Foundation, and the Clinton-led State Department under Barack Obama do not have clean hands when it comes to dealings with Moscow.

The Hill reporters John Solomon and Alison Spann’s inquiry found that the FBI began investigating an effort by the Russian government to infiltrate the American nuclear materials industry as early as 2009. “Russian nuclear industry officials were engaged in bribery, kickbacks, extortion and money laundering designed to grow Vladimir Putin’s atomic energy business inside the United States,” they reported.

These reporters were privy to documents revealing the scope of the FBI’s operation, which was extensive and supported the allegation that Moscow had “compromised” a Uranium trucking firm. All of this took place before the Russian energy firm Rosatom secured its first 17 percent stake in the American nuclear materials extraction company Uranium One in 2009. A year later, Rosatom won a majority stake in that company—a deal that had to be approved at the highest levels of the American government and which alarmed observers who fretted the national security implications of that kind of concession to Moscow.

Meanwhile, between 2009 and 2013, the Clinton Foundation was the recipient of four suspicious tranches of donations totaling $2.35 million from Russian-linked sources including Uranium One’s chairman. Former President Bill Clinton personally received half a million dollars for one speech in Moscow from a Russian government-linked investment bank that was promoting Uranium One stock. While the Uranium One deal was under consideration by the Treasury Department, that bank’s analysts were talking up the value of that firm’s stock.

None of these donations were previously disclosed, despite the Clinton Foundation’s written pledge to disclose all donations it received while Hillary Clinton served as Secretary of State. If The Hill’s reporting is accurate, this is dirty money. Their report alleges that eyewitness and written accounts obtained by the FBI confirm that Russian officials were responsible for this influx of cash to the Clintons.

What’s odd about this account, though, is how sluggish the FBI investigation was. The Hill noted that, despite the evidence they had obtained by 2010, the bureau continued its investigation for another four years. In the interim, the Uranium One deal among others benefiting Moscow was approved and implemented by the Obama administration. Bizarrely, the relevant members of Congress were apparently not briefed about the extent of this probe.

This investigation began when Robert Mueller, now investigating the Trump campaign, was the head of the FBI. It was overseen by Rod Rosenstein, who is now Trump’s deputy attorney general and the man responsible for the appointment of a special counsel. It is easy to see how both Trump administration loyalists and uncommitted observers might find these associations suspicious, and why they might turn that now suspicious eye on the Trump-Russia probe.

There is nothing in Tuesday’s bombshell revelation that challenges the validity of the questions being investigated by Robert Mueller’s office. Anyone who wants to undermine the legitimacy of that probe and attack the characters of its principal investigators, though, now has a trove of new ammunition at their disposal. This was entirely a result of the Obama administration’s reckless, ideological pursuit of rapprochement with Moscow and the Clinton family’s negligent rent-seeking. Democrats have no one to blame but themselves for looking the other way.

Hillary Clinton and her dwindling cohort of image-makers are engaged in an increasingly desperate effort to save her from posterity’s reproach, but the water is rising up over their knees now. Theirs is a losing battle, and Democrats should resist the temptation to come to her defense. A transparent campaign of emotional manipulation in book form has managed to convince a handful of influential liberals that she is the real victim in all of this. That’s incorrect; they are the victims here. And the Clintons are their tormentors. It’s about time Democrats broke free. 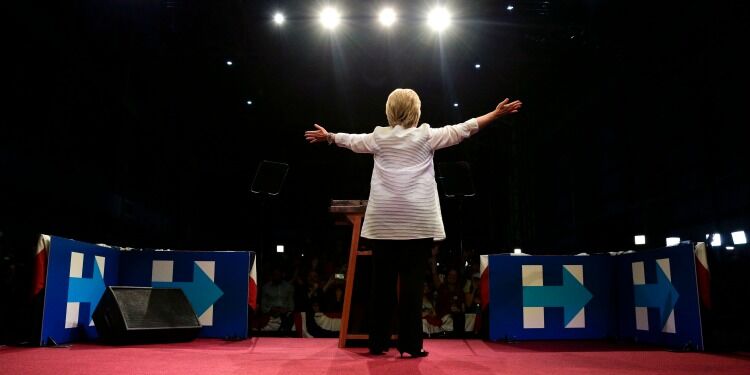