“In the days and weeks to come,” the New York Times alerted its readers, “we will publish essays demonstrating that nearly everything that has made America exceptional grew out of slavery.” The scope of the paper’s mission renders a comprehensive overview of its arguments and contentions impossible, which is valuable if you’re not in the market for a debate. The headline that graces Nikole Hannah-Jones’s submission to this symposium is, however, illustrative of the editorial outlook guiding the project: “Our democracy’s founding ideals were false when they were written. Black Americans fought to make them true.”

There’s a poetic verity in this assertion, but the license the paper’s editors have taken in its pursuit is far too permissive. To proclaim an ideal “false” exposes a lack of familiarity with the word’s dictionary definition. Ideals are aspirational. An ethos is neither true nor false but either morally compelling or not. There aren’t many who would argue that the ideals enshrined in the Declaration of Independence—among them, that all men are created equal—or that the Constitution, which set the foundations upon which universal suffrage and equal protection were built, were conceptually defective. The argument then isn’t whether America’s founding ideals are “false,” but the extent to which we have and continue to live up to them. To hear America’s Democratic presidential aspirants tell it, we have never truly tried to make those ideals manifest.

“This country was founded on white supremacy,” Beto O’Rourke recently told a group of immigrants and new American citizens, “and every single institution and structure that we have in our country still reflects the legacy of slavery and segregation and Jim Crow and suppression, even in our democracy.” The news that every aspect of their new home is indelibly racist must be a disappointment to these American residents. O’Rourke’s disapprobation for the country he hoped to lead may have fallen on deaf ears here, but it was received warmly by a more conventionally Democratic audience. “The legacy of slavery and segregation, Jim Crow, and suppression is alive and well in every aspect of the economy and the country today,” the former Texas congressman said to applause during a recent debate. Amid his failure to generate traction in the polls, O’Rourke is rebooting his campaign this week by saying exactly what he’s been saying only louder. Racism “is as old as America itself,” he conceded this week. It’s a sorry legacy that Americans had formerly dedicated themselves to making amends for. That is, “until this president.”

This self-abasement can’t be said to be the act of one desperate politician. If the Democratic Party’s presidential frontrunner is any indication, identifying white nationalism as America’s foundational principle is the price of admission. “In the 1900s so many women were dying at the hands of their husbands because they were chattel, just like the cattle, or the sheep, that the court of common law decided they had to do something about the extent of the deaths,” Joe Biden told a supportive audience just prior to his entry into the race. “This is English jurisprudential culture—a white man’s culture—it’s got to change.” It’s an odd contention to claim that women received no legal deference in the 20th century, but it’s even stranger to blame that condition on the precepts of English common law that established the concept of blind justice and laid the foundation upon which American civil liberties were extended to all its citizens.

Pledging a personal commitment to the expurgation of the latent white-nationalist sentiment that lurks in the hearts of Caucasian Americans is a common theme among Democratic presidential contenders. “I can talk to those white women in the suburbs that voted for Trump and explain to them what white privilege actually is,” Kirsten Gillibrand boasted in a recent debate. American mothers of majority extraction, she added, must be made to understand that their sons would be shot and killed more frequently by law enforcement but for their “whiteness”—a factually dubious assertion but nonetheless a tenet of this strange new denomination.

Similarly, Georgia gubernatorial candidate Stacey Abrams “would be governor,” according to Seth Moulton, “if this country wasn’t racist.” This claim, too, suffers from a terminal dearth of supporting evidence, but such are the demands of faith. When vicious acts of violence are committed in the name of white racism, it is an indictment of us all because those ideas are not limited to a narrow substratum of American society—not according to Cory Booker. “They were planted in fertile soil because the contradictions that have shadowed this country since its founding remains a part of who we are,” he said. For his part, Bernie Sanders conceded that “we have come a long way” for “a nation which in many ways was created” on “racist principles.” Damnation with faint praise? Perhaps. But when it comes to American racial progress, praise from Democrats—faint or otherwise—is hard to find, so take what you can get.

Those Democrats who are not prepared to blame the country’s institutions for the morass of racism in which Americans languish today are more than willing to blame its president. “Yes,” said Elizabeth Warren when asked if Donald Trump is a card-carrying white supremacist. Kamala Harris, Kirsten Gillibrand, Beto O’Rourke, and Pete Buttigieg agreed. Though anti-defamation groups and Democratic candidates might disagree, some (myself included) would argue that the president has led white nationalists to believe that their views are less marginal than they once thought. Increasingly, though, Democrats reject the premise that white supremacist ideas are marginal at all.

The debate over the scope of white nationalism in America has taken on new urgency amid an increase in acts of violence committed by ideological racists, some of whom cite the president’s words as a source of inspiration. Buttigieg, among others, noted that America handles the threat posed by exogenous Islamist terrorism quite differently than it polices domestic perpetrators, and he pointedly suggested that the United States had adopted a double standard. There are material distinctions between these two dangerous phenomena—notably the disparity between the global financial and arms networks into which aspiring militants can tap—but also how we talk about these threats. Both Presidents Barack Obama and George W. Bush (as well as their respective administrations) were careful not to exaggerate the appeal of Islamist militancy and for good reason. It is tactically unwise to artificially inflate your adversary’s strength, as it risks becoming a self-fulfilling prophecy.

America’s racial history is as complicated and textured as its racial present. It does no one any good to oversimplify the matter. Democratic politicians do their fellow Americans and the far-sighted founding generation no service by distilling 400 years of complex racial history down to its basest elements. It is a dangerous assault on the legitimacy of the nation’s governing institutions because illegitimate unions do not long survive. But for all their earnestness, Democrats probably have no deeper motive than simply flattering their constituents by condemning everyone else. Say what you will about these politicians’ motives; they know what their voters want to hear. 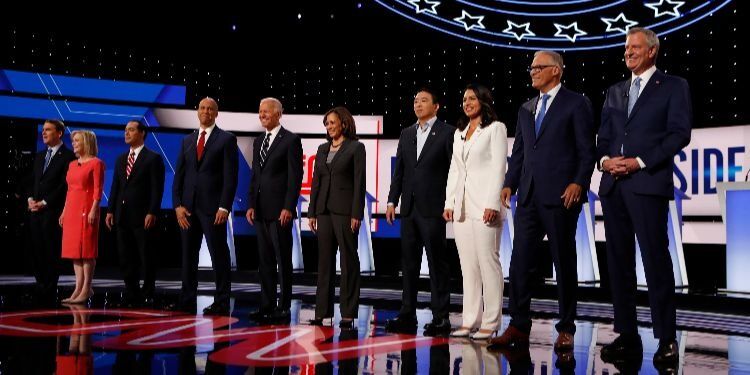