This, we are told, is an age of reckoning. The demonstrations and civil unrest that followed the killing of George Floyd at the hands of Minneapolis police have thrust America into a new period of introspection, compelling it to engage in a long-overdue effort to correct for persistent, even subconscious, but nevertheless subtly racist attitudes. In truth, the country has never abandoned that introspection. It is a permanent feature of American political and cultural life, though it is more pronounced at certain times than at others.

As in similar periods, the corrections are coming faster now, and that is a valuable phenomenon. And yet, like all such reversals of power imbalances, the correction risks stalling out if the consensus around its necessity is strained by the excesses of its most uncompromising advocates. The risk of overreach is real, and the Washington Post provides us with an example of how this moment could be careening toward a dead end.

Two reporters grace the byline on a dispatch published in the Post on Wednesday that could be construed as a valuable contribution to the cause of racial reconciliation only by the most self-absorbed members of the journalistic establishment. The report takes us back to the heady days of 2018 and a Halloween party hosted by the Post’s editorial cartoonist, Tom Toles. There, a guest identified by name but described only as “a middle-aged white woman” (the omission of the station she occupies is its own admission) appeared in blackface in an effort to satirize former NBC News personality Megyn Kelly’s defense of the practice. What followed was a 3,000-word dissertation seemingly designed exclusively for journalistic consumption and characterized by dramatic anguish, self-denunciation, and desperate pleas for absolution from members of the guild.

This story is replete with all the hallmarks of the modern social-justice movement’s excesses. It is a look back on an event that has been retroactively deemed traumatic by its participants. It engages in navel-gazing conjecture about the broader societal impact of what was, in essence, a backyard barbeque. It is festooned with quotes from partygoers engaging in ritualistic self-recrimination for their failure to confront the guest and self-aggrandizing portraits of those who did. It targets an individual and a class who are overwhelmingly sympathetic to the cause of racial enlightenment and the redress of historical grievances—including the woman in blackface herself, who reportedly left the party in tears and has spent “many hours in therapy” talking through the experience. But most important—indeed, presumably the whole point of the piece—is its attempt to exculpate Toles.

“Blackface is abhorrent, period. I know Tom feels the same way,” said Post Editorial Page Editor Fred Hiatt. “I’m glad he has apologized.” The cartoonist recalls how the woman responsible for the offense apologized profusely to him, and how he summarily admonished her. But the item ends on an ominous note for Toles. His initial refusal to broadcast the name of the guest to those her tasteless joke offended was, he was told, “a deliberate act of white privilege and cowardice,” and the Post observed that he was “not an innocent in the conflict.”

At the risk of repeating myself, these themes on display here are familiar. They are explored at length in my book on the indulgences of the modern social-justice movement, Unjust: Social Justice and the Unmaking of America.

** Hyperventilating over piddling controversies, fixating on fleeting scandals resulting from the latest celebrity’s artless comment, and ostentatious displays of sanctimony—these are the forms that so much “social justice” activism takes today. The Identitarian left, in particular, goes in for dramatic displays. As this movement has become more doctrinaire, it has attracted fewer new recruits. So, their targets have become smaller and softer.

More often than not, the people who face retribution for offending the social justice activists of the left are social justice enthusiasts themselves—producers of popular mass media, progressives in finance or the law, writers, artists, chefs, and scientists. This movement draws its power from its ability to torment even inadvertent trespassers, though a measure of complicity is required from the tormented.

As the social justice left has grown angry, insular, and radical, it has become devoted not to persuading the country but to imposing a rigid code of behavior on those who already agree with them. Doing so is easy and gives the appearance of efficacy. That facade is particularly valuable for millions of “woke” activists because where there is perceived value, there is profit to be made.

Indeed, there is seemingly little news value here, but there is commercial value. From media outlets to purveyors of fast food to clothing manufacturers, the public is increasingly apt to reward emotive expressions of social consciousness. As one staffer for the defunct left-wing identitarian blog Mic.com confessed, that outlet “realized earlier than most places that they could commodify people’s feelings about race and gender.”

What is the broader didactic narrative to be gleaned from the Post’s expose? Everyone in the piece is in full agreement about the nature of the offense caused by what was, in essence, a tasteless joke. If there is a point to this piece beyond demonstrating the unassailable virtue of the Post’s employees, it is the pursuit of reader engagement and profit. Therefore, and by any rational assessment, this is exploitation.

That is how moments of societal correction like these fizzle. When the pursuit of remedies for injustice devolves into efforts to enforce in-group conformity and not a broader cross-cultural understanding; when the pursuit of a more perfect Union becomes the pursuit of a more faultless brand, the moment loses its coherence. Those who were once willing to be convinced aren’t listening anymore, but a movement that is fueled by the collection of scalps cannot abandon that objective. And, thus, the movement devours itself.

Those who imagine their wrong-thinking adversaries can be defeated, vanquished, and exiled to the fringes of society in one fell swoop are forever relearning the lessons of history—among them that the forces of reaction get a vote, too. Successful social reformers deprive their adversaries of a compelling argument through the force of moral suasion, from which a self-reinforcing social stigma is derived. This episode is not about persuasion. It’s about raw power. And raw power is only as coercive as the forces it can deploy. Reactionaries can play that game, too—far more easily, in fact, than they can argue against racial rapprochement.

For those who truly believe in the cause of American racial harmony, that’d be a terrible consequence. But it’s one that those who claim to be the most dedicated to that cause cannot help but court. 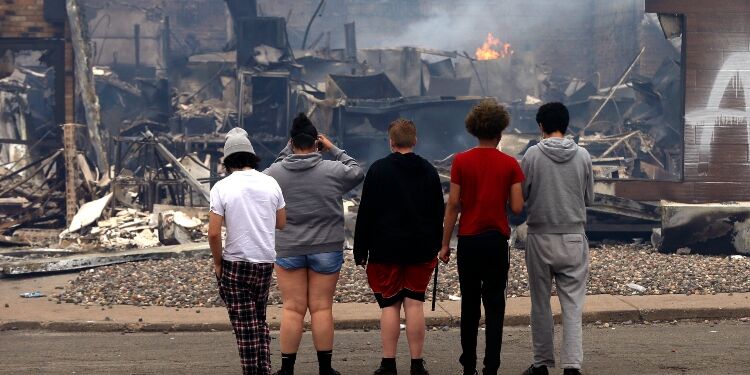