Like a bolt from the blue on Wednesday morning, President Donald Trump announced on Twitter that he would instruct U.S. Navy vessels in the Persian Gulf to “shoot down and destroy” any Iranian boats that make a menacingly close approach to their American counterparts.

Trump’s “order,” if it amounts to that, follows what the Pentagon called the “dangerous and harassing approaches” of 11 Iranian fast boats on six American warships in the region. Maybe Trump just wanted to signal to Tehran that destabilizing behavior like this won’t be tolerated. Perhaps this was a response to the news that Iran had successfully launched a satellite into orbit, demonstrating increased ballistic missile capabilities. Or it might just have been an errant response to a segment that had just aired on “Fox & Friends.” Regardless of the origins of this presidential pronouncement, critics of the administration’s confrontational approach toward Iran instantly leveraged Trump’s directive to declare his Iran policies a failure.

The deterrence that had been reestablished following the January strike on Iranian Revolutionary Guards Corps commander Kasim Soleimani had broken down, we were told. The administration’s “maximum-pressure” campaign, we heard, is an abject failure. These and other familiar refrains are reliable pillars of stability in an all-too-dynamic world. It is unclear, though, why the president would lend credence to those who are politically invested in the failure of his White House’s strategic approach to containing Iran. The behavior of these Islamic Revolutionary Guards Corps fast boats, while destabilizing, is not at all unprecedented. In fact, it’s much closer to the status quo that prevailed before the escalating tensions that culminated in the Soleimani strike.

Provocative, behavior-testing close approaches are a relatively common—albeit unsafe—practice by adversarial militaries in proximity to one another. American assets are regularly targeted for such actions by Chinese and Russian air and naval forces, but the IRGC has made such a habit of this practice that it has become relatively routine.

As early as 2008, Iranian fast boats could be found making aggressive maneuvers toward American ships, but this tactic became far more common in the last decade. The pace of those incidents increased near the end of Barack Obama’s second term in office, including behaviors as reckless as the capture of U.S. sailors. From 2016 to 2018, U.S. and British patrols were regularly harassed by Iranian air and navy assets. On occasion, the episodes were so dangerous that they compelled American commanders to fire warning shots across the bows of their Iranian tormentors.

Even if these approaches are careless and fraught, their regularity renders them manageable. That stands in stark contrast to the kind of unprecedented behaviors in which Iran engaged over the course of 2019 that put the American and Iranian conventional militaries on a collision course.

The Islamic Republic spent much of 2019 engaging in unprecedentedly provocative acts of war: seizing and sabotaging commercial shipping vessels in the critical Strait of Hormuz, downing an unarmed American surveillance drone, and executing a brazen multi-drone strike on the world’s largest petroleum processing facility deep inside the Kingdom of Saudi Arabia. In the final two months of last year, the pace and precision of Iranian proxy attacks on U.S. positions in Iraq increased. In December, one such attack killed an American contractor and wounded three uniformed service personnel. To this, the U.S. responded as it had in the past, with a proportionate strike on the militia responsible for the attack.

But Iranian provocations did not end there. That militia, with the logistical support of its Iranian commanders, laid siege to the U.S. Embassy in Baghdad. A mob breached the outer wall of the compound, set the facility on fire, and sent the U.S. diplomatic presence in Iraq into safe rooms for the next 24 hours. The siege was only lifted after 100 U.S. Marines dispatched to the embassy. The episode sent a clear signal that Iran was undeterred. Its escalatory and confrontational conduct would continue until it had crossed a line that would necessitate an overwhelming response from Western nations against Iranian military and government targets. In short, war.

The balance was tentatively restored after the Soleimani strike and a face-saving retaliatory missile volley targeting U.S. positions in Iraq from inside Iranian territory, but Iran was not suddenly transformed into a placid and responsible international actor. Iranian proxies in Iraq continued to execute sporadic missile attacks on U.S. positions and, as we’ve seen, IRGC boats still harass Western ships in the Gulf. This is suboptimal, but it’s also the status quo ante.

The Iranian regime is a rogue entity. It will forever need to be reminded of the Western resolve to contain it until and unless the regime abandons its destabilizing activities. That is the essential nature of deterrence; it is a dance that does not end. Capabilities evolve. Strategic considerations shift. Windows of opportunity open and close. Deterrence doesn’t maintain itself, and one day Iran will once again threaten the balance in intolerable ways. But this particular IRGC harassment campaign doesn’t cross that threshold. 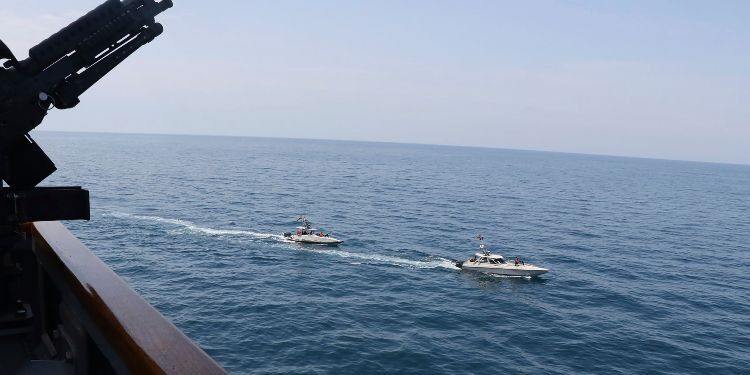