Let’s say for a moment that you’re an uncommitted voter. Or, more plausibly if the polls are to be believed, you’re a loosely committed voter, and you’re struggling to summon up some enthusiasm to vote for the incumbent president. Joe Biden’s performance in last night’s debate provided you with a variety of inducements to head to the polls. Donald Trump, however, did not.

Joe Biden was mendacious. He said the Obama economy was “booming” in 2016, but it was not. He alleged that Donald Trump “shut down” the economy as a response to COVID-19, which the president lacks the authority to do and elides the extent to which state and local Democratic officials have leaned into stringent pandemic-related restrictions. He insisted that the multi-trillion-dollar “Green New Deal will pay for itself” precisely 49 seconds after insisting that “the Green New Deal is not my plan.”

Joe Biden was evasive. Asked directly whether he supports “packing” the Supreme Court with new liberal justices purely to punish Republicans, Biden replied, “Whatever position I take on that, that’ll become the issue.” “The party is me,” Biden said when Trump criticized the former vice president’s colleagues for veering to the left. “I am the Democratic Party.” But Biden was quick to relinquish ownership of that institution when it became inconvenient, as it did when moderator Chris Wallace asked if he had ever pressured permissive public officials like the mayor of Portland, Oregon to get tougher on those responsible for the unrest in his city. He declined to denounce the violent amalgamation of malcontents calling itself Antifa, stressing that it was a mere “idea” and not an “organization.” But the violent idea begets the violent organization, and Biden has had no trouble condemning contemptible ideas that pertain to the political right.

Joe Biden was a hostage to his left flank’s reckless zeal. That is best exemplified by his choice of running mate. Sen. Kamala Harris has a bad habit of telling her audience whatever they want to hear in the moment, even if that moment haunts her and her allies long after the endorphins have worn off. Harris’s most recent offense along these lines was her decision to suggest that a medical miracle that produces a COVID-19 vaccine in a timeframe shorter than the standard two-to-five years cannot be trusted. Anyone who thought that was a deft maneuver should have been disabused of that hallucination by Joe Biden’s flailing efforts to defuse the allegation.

But you know what? None of that mattered. And why didn’t it matter? Because Donald Trump couldn’t make any of it matter.

Donald Trump’s debate performance was utterly bereft of anything resembling a strategy. Classically, an embattled incumbent president facing headwinds in the polls does whatever he can do to transform the race from a reflection on his time in office into a referendum on his opponent. But that would compel Donald Trump to back out of the spotlight for even a few seconds and allow his opponent to make an exploitable mistake. This president cannot do that.

Trump’s determination to steamroll the moderator, make a mockery of the rules to which he had agreed, and interrupt his opponent at every given turn repeatedly rescued Biden from the brink of a mistake. How is it, precisely, that Donald Trump “blew” the handling of the economy even before the onset of the pandemic’s second-order effects (for which polls suggest the public does not blame the president)? We don’t know, because Donald Trump wouldn’t let Biden finish a sentence. How was it that Biden was able to wiggle out of the trap his own running mate had set for him? The president rode to his rescue, pivoting toward an essential inquiry into whether Biden had actually attended Delaware State University.

It fell to Chris Wallace to issue the charge that Democratic city officials, like Portland’s mayor, had adopted permissive policies that led to the flourishing of riots and mob violence over the course of this year. When pressed directly to make the case that 2020’s violence is primarily attributable to Democratic policies, Trump started reciting crime statistics in Chicago—a tragedy that predates 2020 and, therefore, least exemplifies the unique conditions that produced looting, vandalism, and harassment in America’s urban centers this summer. Trump issues wild charges, such as the claim that “the suburbs would be gone” if Biden wins, but he does not reinforce those charges by communicating a story. He merely references the story—one which, if you’re a conservative, you’re already familiar with and energized by. But he is unable to paint a comprehensive portrait in the way you would.

Ultimately, both Joe Biden and Donald Trump renounced political violence, albeit in a perfunctory manner. But the president could not bring himself to commit to the idea that the results of this election will be legitimate. He labors mightily to frame this contest as fundamentally fraudulent, and he is deliberately ambiguous about whether he would facilitate a peaceful transition of power should he lose. He wants Americans to be anxious about these threats, and they are intimidating to many. But they should not be. By getting in front of an event that hasn’t happened yet, the president is, in fact, discrediting the charges he will invariably levy if the election results don’t go his way. And by laying the cognitive groundwork for his own defeat at the polls, Donald Trump has bathed himself in the stink of failure.

And that is what unenthusiastic conservative voters who watched this debate were left with: a lost cause. The American right has every reason to be repulsed by the prospect of a Biden administration. His convivial affect and civil demeanor mask what even his critics on the left admit is perhaps the most progressive agenda in the history of the American presidency. But conservatives do not have an effective messenger in Donald Trump. 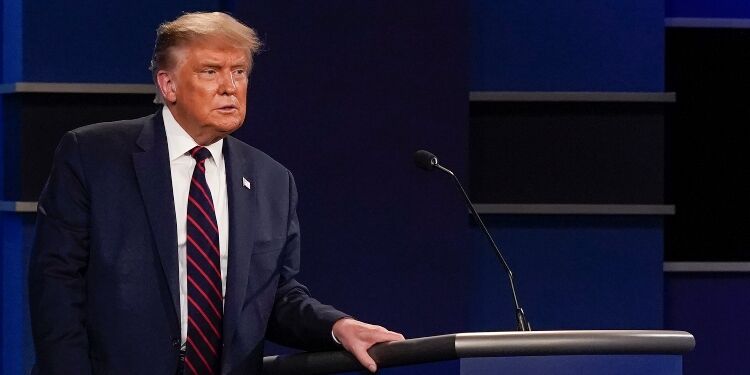